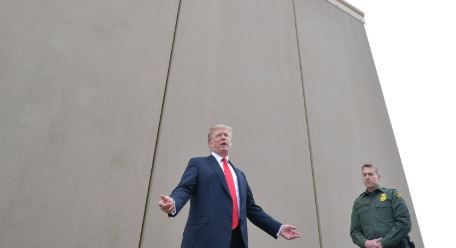 The Trump administration has sent letters to dozens of residences in California, New Mexico and Texas notifying owners that the government is going to survey their land for future border barriers, according to two US defense officials.

“The Right of Entry letter grants the government permission to enter specified private lands to conduct environmental assessments, property surveys, appraisals, geotechnical, and other exploratory work to facilitate future land acquisition and construction of a border barrier on those lands,” US Army spokesperson Cheryle Rivas told CNN in an email.

“Should the landowner decide not to sign the Right of Entry letter, the Army may refer the matter to the U.S. Department of Justice to initiate a condemnation for court-ordered temporary access to the property,” she added.

The move comes as the administration tries to ramp up construction of border barriers in areas that are largely privately owned, requiring the federal government to seek permission before surveying the land. Last week, acting Customs and Border Protection Commissioner Mark Morgan said he recognized the obstacles facing plans to erect additional barriers, citing old records, lawsuits and land that might have multiple landowners.

“It’s a challenge, but again, I still think we’re on track to get the land we need for 450 miles,” Morgan told reporters. “But I will say is there are lawsuits out there. So again, we’ve seen a lot of the judicial activism out there and land acquisition is not going to be immune from that as well.”

Officials said the projects on the land being assessed would use Pentagon money that the Trump administration redirected from various military construction projects, known as 2808 funds.

Those funds are the subject of lawsuits that argue President Donald Trump circumvented Congress when he unlocked Pentagon funds to pay for his wall through a national emergency declaration.

Generally, the government is allowed to acquire privately owned land if it’s for public use, otherwise known as eminent domain. The administration has conceded that this might be necessary in the past, both on CBP’s site and in Justice Department job postings for attorneys qualified in “litigation of land condemnation cases.”

Landowners are often fighting for what is known as just compensation — what they deem a fair price for their property.

So far, Customs and Border Protection has updated roughly 78 miles of existing barrier, swapping out old, dilapidated designs with a newer system. The agency recently began breaking ground in the Rio Grande Valley in Texas.