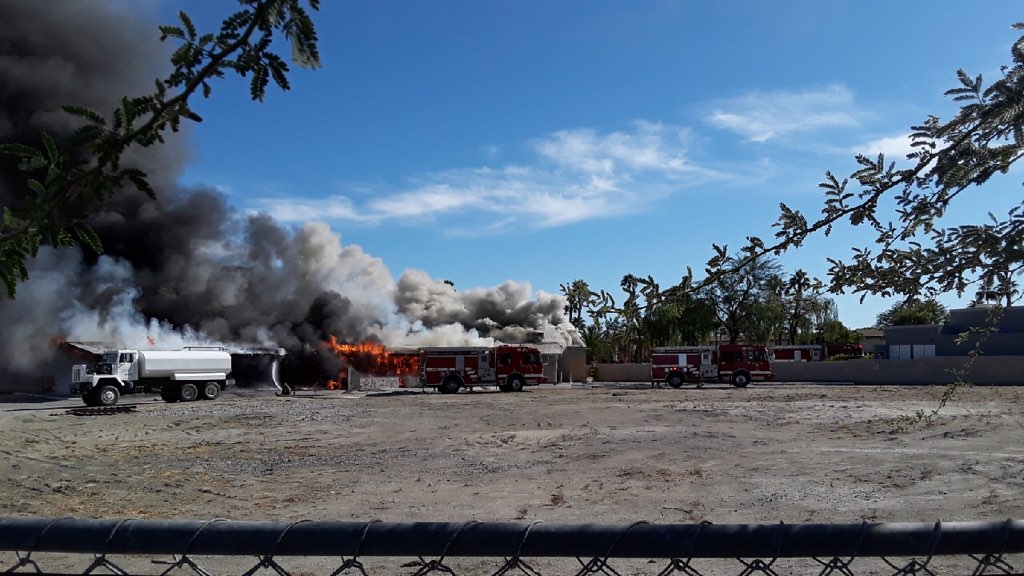 Fire ripped through the abandoned Casey’s Restaurant and Lounge in Palm Desert at noon on Sunday.

John Zocolillo and Danny Cilo visiting from New York were among the first on scene and shot video of the building on fire.

“We walked over to try and help see if anybody was inside and it was just engulfed in flames,” says Zocolillo.

Cal Fire Riverside County Fire Department Battalion Chief Gad Amith says the fire was so intense they took an aggressive approach, calling a second alarm, “The amount of volume of fire and the amount of heat that the fire was generating was threatening an occupancy just behind me on the south side and so to mitigate the exposure and the threat to other occupancy we deployed both ladder trucks and what we called a water tower operation that’s designed to take the heat out of the fire and knock the fire down efficiently minimizing any potential injury to firefighters.”

Jackson Thompson, the owner of construction company J. H. Thompson and Sons says he breathed a sigh of relief because his company just completed a massive operation to remove toxic asbestos from the building.

Firefighters had a tough battle on their hands but were able to put out the fire and all go home safely.

“You gotta give it up to the firefighters, you know they responded quickly and they did a very good job putting the fire out,” says Zocolillo.

“Anytime we go on a fire of this magnitude and I stand here to talk to you two hours later without injuries to our guys is a good day to our organization and a good day for our community,” says Amith.

Amith says there were no reports of people inside and the cause of the fire is under investigation.