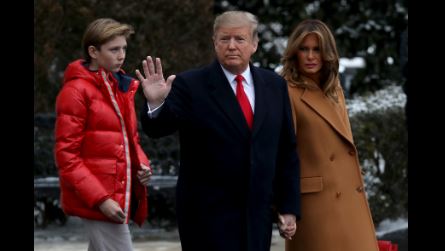 Melania Trump admonished one of the legal scholars testifying at Wednesday’s impeachment inquiry hearing after the professor made a joke involving her son, Barron, for which the professor later apologized.

“A minor child deserves privacy and should be kept out of politics. Pamela Karlan, you should be ashamed of your very angry and obviously biased public pandering, and using a child to do it,” the first lady said in a fiery tweet aimed directly at Stanford Law professor Pamela Karlan, an impeachment witness for House Democrats.

Trump was addressing Karlan’s mention of Barron Trump in her testimony, wherein she used the 13-year-old’s first name in an analogy to make an argument about the differences between kings and presidents.

“The Constitution says there can be no titles of nobility, so while the President can name his son Barron, he can’t make him a baron,” said Karlan, who is in favor of President Donald Trump being impeached.

Karlan later apologized for her remark, saying, “I want to apologize for what i said earlier about the President’s son, it was wrong of me to do that. I wish the President would apologize, obviously, for the things he’s done that’s wrong, but I do regret having said that.”

It was the first time Trump has weighed in publicly on the ongoing impeachment inquiry and investigation into her husband. Asked about Trump’s tweet, White House press secretary Stephanie Grisham told CNN, “I think Mrs. Trump’s tweet speaks very clearly for itself.”

Rep. Matt Gaetz, a Florida Republican who is one of Donald Trump’s staunchest allies in Congress, directly confronted Karlan about the comment during his period of questioning at the hearing.

“Let me also suggest that when you invoke the President’s son’s name here, when you try to make a little joke out of referencing Barron Trump, that does not lend credibility to your argument. It makes you look mean,” Gaetz said to Karlan. “It makes you look like you’re attacking someone’s family, the minor child of the president of the United States.”

“The impeachment hearings today reached a new low,” Pence said. “I just heard at the hearing today, one of the Democrats’ witnesses actually used the President and first lady’s 13-year-old son to justify their partisan impeachment. Democrats should be ashamed. Enough is enough.”

While minor children of presidents have occasionally received criticism and scrutiny, it’s long been a tradition in Washington to keep first children out of the political fray.

In 2017, Chelsea Clinton — who was one year younger than Barron Trump is now when her father, Bill Clinton, became president — defended the youngest child of Donald Trump.

“It’s high time the media & everyone leave Barron Trump alone & let him have the private childhood he deserves,” Clinton wrote.