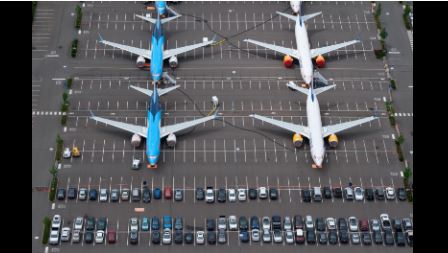 Boeing plans to suspend production of the 737 Max starting in January as it waits for the embattled plane to be recertified to return to service, the company announced Monday.

The company’s stock price closed down more than 4% Monday after early reports that Boeing might halt the plane’s production began to circulate, and then fell another 0.67% after hours following the company’s official announcement.

The 737 Max was grounded worldwide in March after two fatal crashes — a Lion Air jet that plunged into the Java Sea in October 2018 and an Ethiopian Airlines plane downed near Addis Ababa in March — killed 346 people. But getting the plane back in the air has proven immensely difficult, causing major financial and reputational issues for Boeing.

Orders for the 737 Max dried up, and it wasn’t until last month that Boeing recorded its first new orders — a total of only 30 planes — since the grounding. In the meantime, the company continued to produce the planes as it hoped for a quick recertification by airline officials around the globe.

Now that process, which has faced a number of setbacks, has been pushed into 2020 and Boeing has an inventory of more than 400 of the airplanes in storage. The company said the continued uncertainty of the 737 Max’s future forced it to make the drastic move to pause the plane’s production and shift its focus to delivering planes it has already produced.

“We believe this decision is least disruptive to maintaining long-term production system and supply chain health,” Boeing said in a release Monday.

Boeing has been building 42 of the 737 Max jets a month since the grounding, so as not to cause hardship for its suppliers or be forced to lay off workers it will need later. But the company has not been able to deliver the planes.

The company has already said it will take until at least 2021 to deliver all the jets built since the grounding, as airlines cannot logistically or financially accept hundreds of additional planes all at once. Regulators also have to inspect each aircraft, adding to the delay.

For now, Boeing said it doesn’t expect to have to layoff or furlough employees. Affected workers will either continue 737-related work or be temporarily assigned to other teams.

The company said it will provide financial information regarding the production suspension in January, when it announces its earnings for the last three months of 2019. The halt is likely to come at a tremendous cost to Boeing, which makes most of the revenue it gets for selling a plane once it is delivered.

“Safely returning the 737 Max to service is our top priority,’ the company said Monday. “We know that the process of approving the 737 Max’s return to service, and of determining appropriate training requirements, must be extraordinarily thorough and robust, to ensure that our regulators, customers, and the flying public have confidence in the 737 Max updates … We remain fully committed to supporting this process.”