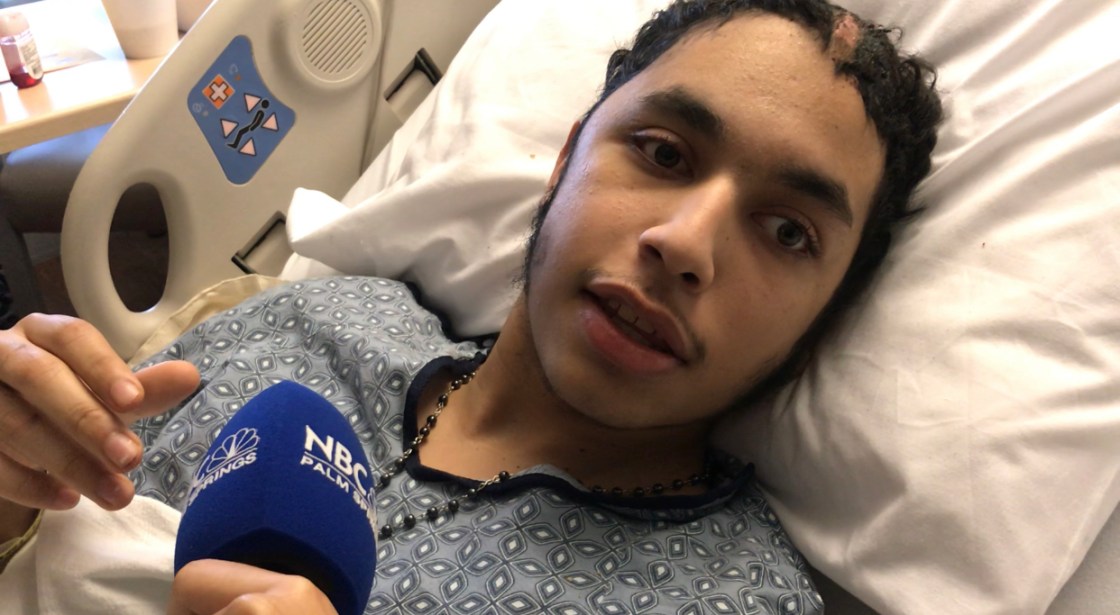 “I’m feeling great,” says 17-year-old Israel Ramirez as he sits up in his hospital bed at Desert Regional Medical Center.

He was recently rushed to emergency with swelling to his brain after what was supposed to be a his final surgery.

“I thank God everyday for giving me a second chance at life,” says Izzy.

Even he can’t believe the number of surgeries he’s endured.

“Five brain surgeries,” he says adding, “it’s beyond me, I can’t even believe I’ve made it through.”

He’s restless to get back to what he loves, “Just missing football and my school, my friends, you know I miss seeing my friends everyday, my brothers.”

He hopes he can live out his dream of making it in the NFL and play for his favorite team the Dallas Cowboys.

His mom Irma Alvarez says doctors told them it would takes months for him to relearn to talk and do little things, “He’s a miracle he’s a blessing, just happy that he’s here,” she says through tears.

She has no doubt he will accomplish his dream or anything he sets his mind to.

Dr. Anthony Alastra, his neurosurgeon at Desert Regional Medical Center, who is among the best in the field also believes.

“There’s miracles for sure,” adding he also credits prompt, state of the art care and Izzy’s age are helping him defy the odds, “we’re really happy with his progress for someone who has had a ruptured brain AVM the morbidity and mortality is quite high so that we were able to get him stabilized and then remove the AVM with essentially no significant deficits is just a testament to his ability to get through this.”

Izzy has words of encouragement for anyone going through a rough time, “Just give your heart to it and stay strong.”

And he’s grateful for his family, friends and community for keeping the faith, “I love them to the moon and back without them I don’t know what I‘d be able to do.”

He is also very aware that his family will need financial support after the medical treatments and asked that the community to support their fundraiser at Kings Club Barbershop on December 29, 2019 from 9:00 a.m. to closing.

Izzy tells us he’s looking forward to Christmas and he asked Santa Claus for a pair of Air Jordan’s size 13, we hope he gets his wish!