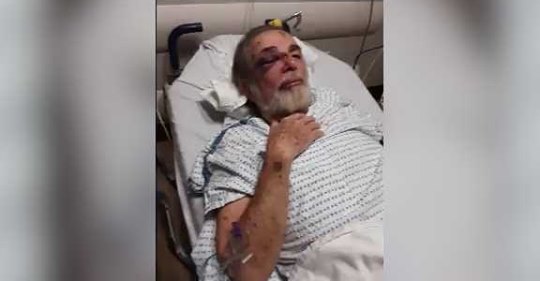 A grandfather in New York was left severely injured while looking at Christmas lights.

According to WCBS, police say the incident was an apparent road rage attack.

John Blanco was driving with his grandson, Joey Blanco, after Joey’s theater practice.

The two were driving home slowly, looking at the Christmas decorations on their drive.

“We were just having a good time looking at Christmas lights and there were these kids behind us and I guess we just weren’t driving fast enough to suit them,” Joey told the news outlet.

The individuals screamed and cursed. They then pulled their car in front and blocked the Blanco’s path, according to Joey. The strangers got out of their car at a stop sign.

Joey said he also got out of his car.

“They started getting out and I got out, too, because I felt threatened, and then it turned into basically a street brawl,” the teen told WABC.

John Blanco, 73, got out of his car to help and was attacked.

Emergency responders were called and John Blanco was taken to a hospital.

He is currently in a hospital with bleeding on his brain and multiple facial fractures, according to reports.

The family is hopeful he will be home for Christmas.

“I wanted to protect my grandpa and that is what was in my mind, but if I didn’t get out of the car then maybe nothing would have happened to him,” Joey told WCBS.

Joey was able to get a partial plate of the stranger’s car. Police are looking for the individuals involved.