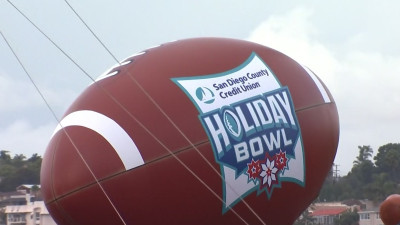 Slovis had a school-record four 400-yard passing games after becoming the starting quarterback in the second game of the season in place of the injured JT Daniels. The Trojans are fifth among Football Bowl Subdivision teams in passing offense, averaging 335.9 yards per game.

Iowa held seven of its 12 opponents to their season-low point total.

Hawkeyes quarterback Nate Stanley will be making his third start in a bowl game. Iowa won both of the previous two, defeating Boston College, 27-20, in the 2017 Pinstripe Bowl, and Mississippi State, 27-22, in the 2019 Outback Bowl.

The game is a matchup of teams on three-game winning streaks with victories in five of their last six games.

USC (8-4) opened the season with two victories, then lost three of its next four games, with two of the losses coming by three points.

“The game is a terrific matchup between teams that finished very strong down the stretch,” Trojans coach Clay Helton said.

Iowa was 19th in the most recent Associated Press poll, three spots ahead of USC.

The Trojans have just four senior starters and have had 26 starters or key backups miss action because of injury.

The game will be USC’s first against Iowa since the Trojans’ 38-17 victory in the 2003 Orange Bowl. USC leads the series, 7-2, including a six- game winning streak. The Hawkeyes’ most recent victory in the series was in 1961.

The Trojans will be making their third appearance in the Holiday Bowl in six years. They defeated Nebraska, 45-42, in 2014 and lost to Wisconsin, 23- 21, a year later.

Iowa will be making its fourth Holiday Bowl appearance and first since 1991, when it tied Brigham Young, 13-13, the only tie in the history of the game, which has been played annually since 1978. The possibility of a tie ended when college football adopted overtime for the 1996 season.

The Holiday Bowl has matched teams from the Pac-12 and Big Ten conferences annually since 2014, a streak that will end after Friday’s game. Teams from the Atlantic Coast Conference will face Pac-12 teams for at least each of the next six years under agreements announced in August.

Iowa will remove the Tigerhawk from its helmet for the game in honor of Hayden Fry, their coach from 1979-98, who died Dec. 17 at the age of 90. Fry introduced the logo to the university’s athletics department.

This will be the third time both Tigerhawks have been removed from the helmet for a football game. The first was Nov. 2, 1991, the day after six people were killed in a shooting on the Iowa campus. The second was the 1996 Alamo Bowl, when Diane Mitchell, the mother of linebacker Mark Mitchell, was killed in a car crash on the way to the game in San Antonio.

The Hawkeyes’ helmet will include a decal honoring Bump Elliott, Iowa’s director of athletics from 1970-91. He died Dec. 7 at the age of 94.

“We have had two big losses in the past month, so we are going to recognize coach Elliott with a sticker on the back of our helmet that will say `Bump’ on it,” Iowa coach Kirk Ferentz said Monday. “That was in the works a couple weeks ago.

“Then with Coach Fry passing last week, (we) talked to the family and I think we’re all in agreement that it will be a really nice thing to take the Tigerhawks off of the helmets on both sides. A precedent was set. He did that twice during his time and it was well received by his children.”

The Hawkeyes will have a commemorative patch honoring Fry on their helmet next season, Ferentz said.