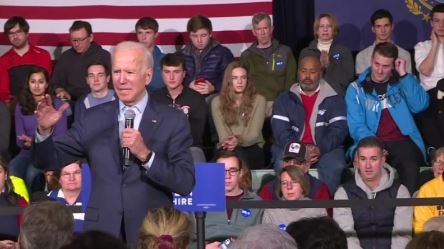 Democratic presidential candidate and former Vice President Joe Biden said that, if elected, he would nominate former President Barack Obama to the highest court — if Obama would accept it.

During an event in Washington, Iowa, over the weekend, Biden was asked if he would nominate Obama, his former boss, to the Supreme Court.

He continued to explain that he would appoint to the court the kind of people who see the Constitution as a “living” document, highlighting that “I said years ago, I’ll be satisfied when half the court is women.”

The idea of appointing Obama to the Supreme Court has come up before, with 2016 Democratic nominee Hillary Clinton calling it a “great idea” when she was on the campaign trail. He would also not be the first president to switch branches — former President William Howard Taft was the 27th president before serving as the 10th chief justice of the Supreme Court.

But Obama himself has questioned whether he would have the temperament for the monastic life of sitting in chambers writing opinions.

“When I got out of law school, I chose not to clerk,” he told CNN legal analyst Jeffrey Toobin in a 2014 story in The New Yorker. “Partly because I was an older student, but partly because I don’t think I have the temperament to sit in a chamber and write opinions.”

“I love the law, intellectually,” Obama continued. “I love nutting out these problems, wrestling with these arguments. I love teaching. I miss the classroom and engaging with students. But I think being a justice is a little bit too monastic for me. Particularly after having spent six years and what will be eight years in this bubble, I think I need to get outside a little bit more.”