Michael Flynn should get up to 6 months in jail for lying to FBI, prosecutors say 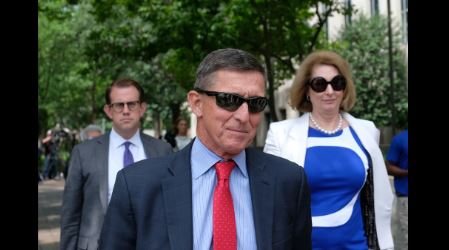 President Donald Trump’s first national security adviser Michael Flynn should serve up to six months in jail, prosecutors told a federal judge on Tuesday, saying Flynn has failed to accept responsibility for his actions and undermined a separate criminal case.

The sentencing memo shows just how harshly the Justice Department responds to Flynn’s recent attempts to unravel his guilty plea in the Mueller investigation and says that he sought to thwart the government’s investigation into his former business partner, an abrupt turn from Flynn’s months of cooperation and public reticence during the special counsel’s probe.

“It is clear that the defendant has not learned his lesson,” the Justice Department wrote. “He has behaved as though the law does not apply to him, and as if there are no consequences for his actions.”

Flynn, 61, is set to be sentenced on January 28, more than two years since he pleaded guilty to lying to federal investigators.

“Given the serious nature of the defendant’s offense, his apparent failure to accept responsibility, his failure to complete his cooperation in — and his affirmative efforts to undermine — the prosecution of Bijan Rafiekian (also known as Bijan Kian) and the need to promote respect for the law and adequately deter such criminal conduct,” prosecutors wrote, recommending between zero and six months in jail.

Flynn’s sentence also must “deter others from lying to the government,” the Justice Department said, especially given ongoing threats from foreign governments.

“Lying to the FBI, in any context, cannot be tolerated,” the memo states. “That is particularly true in a counterintelligence investigation targeting efforts by a foreign government to interfere in our democratic process — a threat that continues to this day.”

Flynn was a close adviser to Trump during the 2016 campaign — and famously led a “lock her up” chant about Hillary Clinton at the Republican National Convention. He then served as Trump’s national security adviser for less than a month in early 2017.

In late 2017, he became an early and major cooperator in special counsel Robert Mueller’s investigation.

Only the fourth defendant to face a charge in the probe, Flynn cut a deal to accept a single criminal charge of lying. He admitted to lying in an FBI interview in January 2017 about conversations he had during the presidential transition with then-Russian ambassador Sergey Kislyak, and failing to disclose on federal forms details about his lobbying firm’s work for Turkey prior to his administration service.

Prosecutors one year ago said Flynn should receive as little as no jail time, making Tuesday’s memo a reversal.

“Few courts have sentenced a high-ranking government official and former military general for making false statements,” the Justice Department said. “And the government is not aware of any case where such a high-ranking official failed to accept responsibility for his conduct, continued to lie to the government, and took steps to impair a criminal prosecution.”

Flynn had been a focus of the FBI’s early counterintelligence probe related to Russia beginning in August 2016, and spoke to agents in the West Wing about his contacts with Russia so early in the Trump administration that he and the agents who interviewed him passed Trump discussing where to hang art.

Flynn was fired on February 13, 2017, more than two weeks after the Justice Department told the White House that Flynn lied to Vice President Mike Pence about his communications with Russia.

The events prompted Trump to ask then-FBI Director James Comey about “letting Flynn go,” referring to the agency’s ongoing investigation, setting off a chain of events that resulted in Mueller’s appointment as special counsel.

In addition to speaking to Mueller more than a dozen times, Flynn helped investigators with a case against his former lobbying partner regarding the Turkey work. Flynn also reported to the special counsel’s office that “persons connected to the administration or Congress” had contacted him — with an attorney for Trump even leaving a voicemail — and potentially attempted to influence his willingness to cooperate.

Judge: ‘I am not hiding my disgust, my disdain for your criminal offense’

A year ago, prosecutors noted he had accepted responsibility for his illegal actions “in a timely fashion.” “Given the defendant’s substantial assistance … a sentence at the low end of the guidelines range — including a sentence that does not impose a term of incarceration — is appropriate and warranted,” the prosecutors wrote before his originally scheduled sentencing. That sentencing did not go as planned.

During the hearing, Judge Emmet Sullivan reacted badly to Flynn’s crime of lying and to his then-lawyers suggesting he was unlike others Mueller prosecuted for lying.

“My guess was not one of those defendants was a high-ranking government official who while employed by the President of the United States … made false statements on the premises of and in the West Wing of the White House,” Sullivan said. “I am not hiding my disgust, my disdain for your criminal offense.”

So Flynn, hoping for no jail time, asked to delay his sentencing so he could show the judge he would help prosecutors even more. He was lined up to testify as a star witness against Kian in a mid-2019 trial in Virginia federal court.

But that cooperation collapsed a half-year later. Flynn changed his legal team and then began refusing to admit to his guilt to the same extent he had before, according to court filings.

Over the past months, as Flynn awaited sentencing, his family and supporters have clamored for political compassion for the fired national security adviser. One of his lawyers, Sidney Powell, has advocated on Twitter for pardons from the President. Trump tweeted about Flynn and Powell three times since last June, including wishing them “Good Luck.”

Though a jury convicted Kian, a judge threw out the verdict, acquitting the lobbying partner. Flynn wasn’t called to testify.

Now, the last twist in Flynn’s proceedings may lie with Sullivan alone, in determining whether he spends time in prison.

Last month, Sullivan denied Flynn’s legal team’s recent attempts to attack prosecutors and dismiss his charge, and rejected a theory they attempted to use, that the FBI entrapped Flynn when he lied to them.