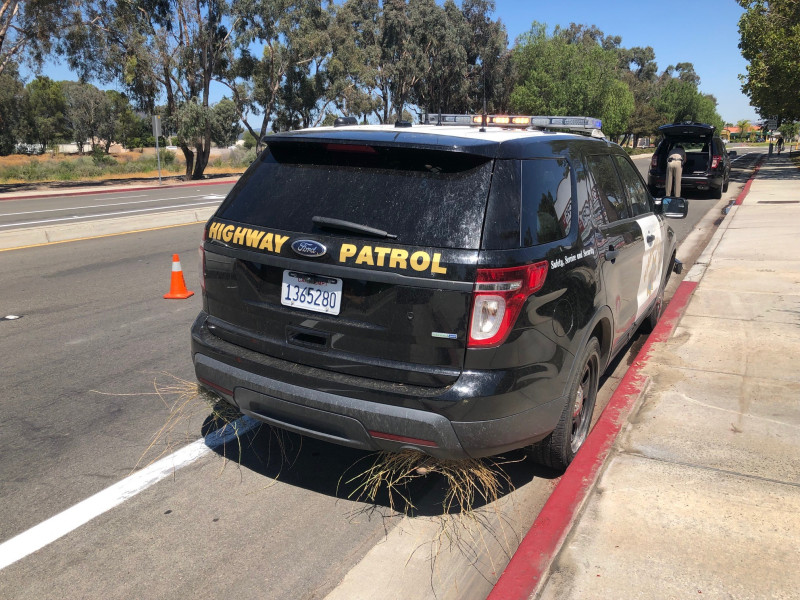 A Vista man who stole and crashed a California Highway Patrol cruiser, carjacked one vehicle and later stole another during a 90-minute, three-county pursuit was sentenced Friday to five years, eight months in prison.

Adolfo Makano Moreno, 20, pleaded guilty in November to three counts each of felony evading and auto theft, as well as one count each of carjacking, battery and hit-and-run resulting in property damage.

According to the CHP, about 9:40 a.m. last Aug. 5, an officer attempted to stop Moreno for riding a motorcycle without a helmet in the area of Interstate 15 and Murrieta Hot Springs Road, but the defendant sped away, prompting the patrolman to give chase.

Lassig said Moreno dumped the bike on the side of the road and fled on foot with the officer in pursuit. The defendant circled back to the parked CHP unit, jumped in, and drove away before the patrolman could get there.

Sheriff’s deputies and other CHP officers were alerted, and a sheriff’s helicopter soon spotted the stolen cruiser, directing patrol cars to its location.

While fleeing, Moreno crashed into a concrete curb on Jefferson Avenue near Rancho California in Temecula.

“The suspect fled on foot and flagged down a driver of a Lexus in a parking lot area on Ynez Road,” Lassig said. “The suspect used physical force to steal the vehicle from the driver and continued to flee in the Lexus. CHP units pursued the suspect in the Lexus.”

Moreno sped south on I-15, eventually entering the community of Cardiff, in San Diego County, where he caused a four-vehicle collision on Manchester Avenue, according to Lassig, adding that no one was injured.

The defendant ran from the wreck and came across a Toyota Prius parked on a street a couple of blocks away, with the driver’s side door open and keys in the ignition. He stole the car and headed north on Interstate 5.

About 11:30 a.m., as he entered Mission Viejo, in Orange County, with law enforcement officers on his tail, he stopped and surrendered at El Toboso and La Mancha.

Moreno had no documented prior felony convictions in Riverside County.