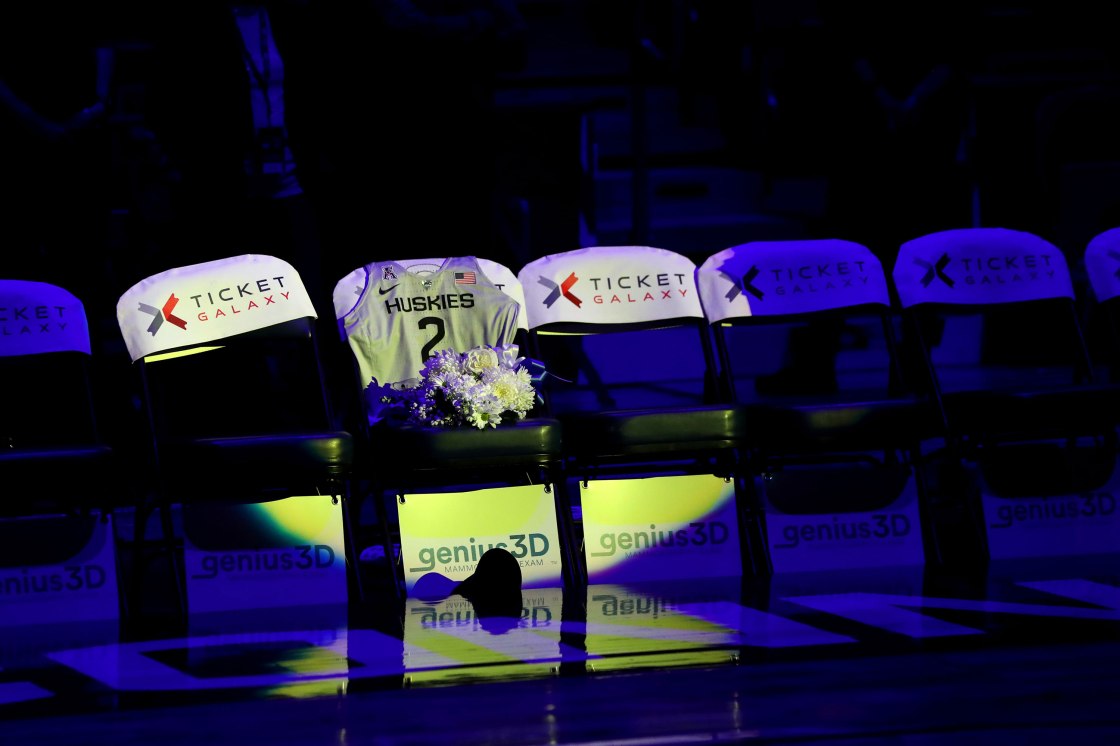 Gigi Bryant always wanted to be a UConn Husky. Now, she’ll be one forever

It was well known that Mambacita wanted to be a University of Connecticut Husky, and on Monday she became an honorary member of the most decorated team in women’s college basketball.

Gianna Bryant had her 13-year life cut short this weekend when the Sikorsky S-76B carrying her, father Kobe Bryant and seven others crashed in Calabasas, California.

Three thousand miles away in Storrs, Connecticut, the news came with an especially brutal epilogue. Gigi, as she was known, always wanted to play for the Huskies, who have lifted a record 11 championship trophies and whose coach, Geno Auriemma, is arguably the best hoops skipper of all time.

The father and daughter attended games as fans, and in an October 2018 exchange captured by an ESPN reporter, the elder Bryant told fellow sharpshooting NBA legend Reggie Miller, who was pressing him to send Gigi to UCLA, that his daughter “is hellbent on UConn.”

Before UConn’s Monday exhibition game against the US Women’s National Team, the Huskies draped a No. 2 jersey — the digit Gigi wore — over one of their bench seats. A bouquet wrapped in blue and white ribbons was placed in front of it.

The team tweeted a photo of the memorialization with the caption, “Mambacita is forever a Husky” — a nod to the teen’s nickname, derived from her famous father’s sobriquet, Black Mamba.

Once the game tipped off, the players continued the tribute, borrowing from the Atlanta Hawks and Washington Wizards.

Team USA guard Sue Bird, a former Husky, declined to bring the ball across midcourt, resulting in an 8-second violation — an ode to the number Bryant wore when he first joined the Los Angeles Lakers in 1996.

UConn’s Crystal Dangerfield then took the inbound pass and allowed the shot clock to expire, spurring a 24-second violation in honor of the number Bryant wore in high school and during the latter half of his pro career.

Both jerseys were hoisted into the rafters of the Staples Center following the Lakers luminary’s retirement in 2016. Bryant also won two Olympic gold medals and a hemispheric International Basketball Federation title with the US Men’s National Team.

Cameras caught Auriemma on the sideline, lowering his head and dabbing his eyes during Monday’s commemoration.

After the game, which the Huskies lost, Auriemma said it was difficult to take the court with the pall of the UConn’s fans’ deaths hanging over the Harry A. Gampel Pavilion.

Bryant still had plenty to offer the world, Auriemma said, and he recalled the first UConn game that Bryant and Gigi attended and how Gigi was in awe of being around the Huskies ballers, while his players were enthralled to be in the presence of an NBA legend.

“You could just see the look in her eyes, like she was so excited,” Auriemma said. “Imagine the absurdity of that: that your father’s Kobe Bryant and the most excited you’ve been in a long time is being around college women’s basketball players, but that’s what it meant to her. That’s what she wanted to be.”

Hours after the deadly California crash Sunday, the Hawks and Wizards tipped off with All-Star point guard Trae Young wearing Bryant’s No. 8. Before the game, Young revealed that Gigi was a huge fan of his, and of the three games she’d attended in the 2019-20 season, two of them were Hawks games.

“She told me I was her favorite player to watch. I can’t believe this,” he tweeted. “Rest Easy Gigi.”

After the teams gave up 8- and 24-second violations in Bryant’s honor, they went on to put on an offensive clinic fitting of one of the basketball’s greatest all-time scorers. The final: Hawks 152-Wizards 133.