Children are joining a self-defense militia in Mexico 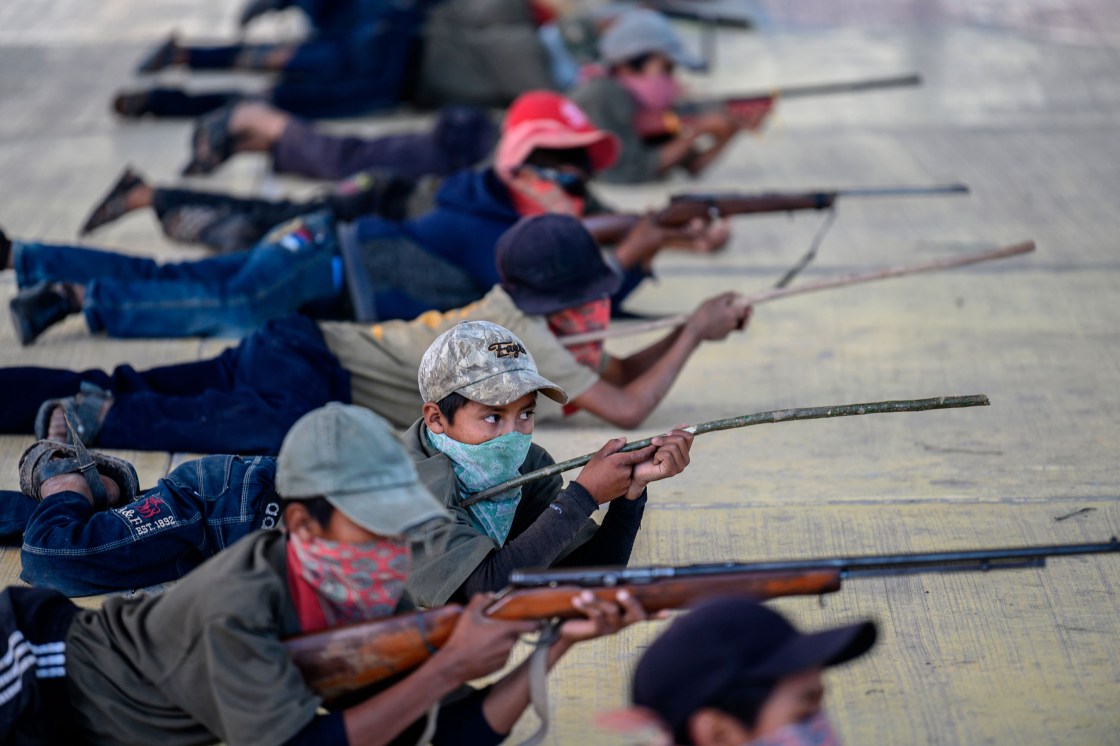 In a remote, mountainous region of Mexico’s Guerrero state, a group of uniformed young boys lined up on a basketball court. “Attention! Lift up your weapons now,” their trainer yelled as the kids rushed into position, hands firmly holding onto their rifles. The littlest ones are training with sticks, faces covered with colored bandanas.

The children, ages 6-12 are training to eventually protect their community against criminal groups, in a lawless terrain where residents say no one is safe.

Guerrero state registered 1,891** intentional homicides in 2019. It was the deadliest year for Mexico as a whole since records began, with a staggering 35,588** murders, according to the National Public Safety Secretariat.

As the government of Mexican President Andrés Manuel López Obrador struggles to unravel a complex social crisis fed by turf wars between drug cartels, locals in a Guerrero town say they have no choice but to defend themselves — and to teach their children to do the same.

Since 2014, the indigenous town has mustered its own volunteer local police group, known as CRAC-PC (short for Regional Coordination of Community Authorities- Community Police), run by Bernardino Sánchez Luna. The group is about 200-strong and began recruiting minors about eight months ago. Youth training began in earnest two months ago.

“I don’t want to carry this weapon, I don’t, but the criminals have forced us too. We have to defend our people,” CRAC-PC member Jose told CNN en Español. Fear of the armed group running the region, Los Ardillos, led them to take up arms to protect themselves, he adds.

Jose and his wife Elvia have two sons, 14 and 17, who joined CRAC-PC voluntarily, he says.

But the young recruits have few other options.

The community lacks social services such as education and health, residents and the children told CNN en Español. Primary school teachers sometimes don’t show up for class, and it’s too dangerous to send kids to higher education institutions in other towns and cities, because travel is too dangerous while the criminal groups roam, sometimes even setting up checkpoints.

“I prefer that they had a notebook and pen, but the need forces us,” says Elvia.

“If there was an opportunity to for them to study — to become someone — that would be what we want most, but seeing the government do nothing to offer security to our communities, well now we rise up to defend our community,” Jose said behind a green bandana covering his face.

The youngest children being trained by CRAC-PC are six years old. When they are between the ages of 12-15, they will be old enough to “guard their community,” according to Sánchez Luna, the group’s leader.

One recruit, 12-year-old Diego, is soft-spoken behind his bandana. He loves basketball and used to go to school, but the teachers stopped coming. “Maybe they’re scared. Who knows why they don’t come,” he said.

Asked if he understands the risks to being armed, he nods. “If I carry a gun, it can be loaded and I might hurt someone.”

President López Obrador campaigned on a promise to end corruption and violence by alleviating the poverty that drives gang membership — what he famously termed a “hugs, not bullets” strategy — but has not succeeded in stemming the bloodshed so far.

“Now there is a new strategy. It is no longer facing violence with violence, facing evil with evil,” López Obrador said last week during his daily morning press conference, insisting that his strategy will show results, after being questioned about child trainees like Diego.

“We’re tending to the causes, we have to confront violence, and we have to give kids, the youth options to push them away from weapons and violence, and that is what we are doing everywhere,” López Obrador said.

But at least in Guerrero state, ongoing instability is still pushing some children toward weapons. Eduardo, 15, tells CNN that he misses school, his friends, his teachers and would prefer to return to his old life. But “we have to protect our community because at any minute, the criminals can enter,” he says under a bright, red bandana.

Though unpaid, volunteering can be a full-time job — Eduardo said his day starts at 7am and ends at 6pm.

“We need to look into education, that kids go back to school,” said Guerrero Governor Héctor Astudillo Flores on Friday during a visit to the community, where he sat down with government officials and local residents.

“There is great anger that is understandable, and it is our obligation to take care of our children,” Astudillo Flores said when asked why parents train their children to take up arms. “I understand [the parents] are irritated, of course I understand.”

So far, none of this town’s volunteer police — juvenile or adult — have actually confronted any criminal groups yet, though they cite clashes in a nearby town as reason to prepare. And some observers suggest that the greatest impact of arming children may be on Mexico’s government itself.

“The ads for child recruitment in the CRAC’s are a desperate act to get the attention of the Mexican State,” said Mexico’s Network for the Rights of Children (REDIM) after news broke last week of the young recruits.

The only real solution in Guerrero and elsewhere, it said, is for López Obrador’s administration “to articulate a national strategy to stop armed violence.”