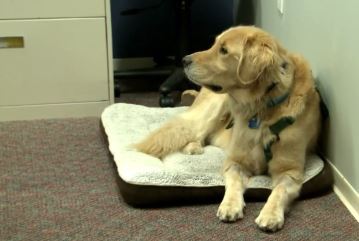 (KMOV ) — It can be very hard for victims of abuse to talk in a courtroom about their ordeal. One furry staff member at the St. Charles County Prosecutor’s Office is making it a little easier.

Sully is a golden retriever who works at the St. Charles County Courthouse. Victoria Roberts is his handler.

“Court doesn’t start till about 8 or 9, so he will make his rounds to everybody that’s in the office,” Roberts said.

Sully is a big deal around the courthouse. He has business cards and his own action figure, but he also has a very important job.

“To be a comfort for different victims and witnesses that have to come in on the criminal cases that are going through the system,” Roberts explained.

Victims of abuse have to be interviewed, and that something that can be especially hard for children. That’s where Sully comes in.

“We can have them sit on a couch and he will literally get up on the couch and put his head in their lap. So they will just pet him the whole time they’re talking to us,” Roberts said.

Sully even sits in court. Prosecutor Tim Lomar told us a story about two children abused by an adult.

“The first time these children came in to speak with us they were terrified. They couldn’t put together a complete sentence without becoming emotional. So fast forward to trial. Sully was with them. And they were able to seamlessly testify and provide the evidence we needed to lock up a very bad guy,” Lohmar said.

Sully was provided by the CHAMP Assistance Dogs Organization.