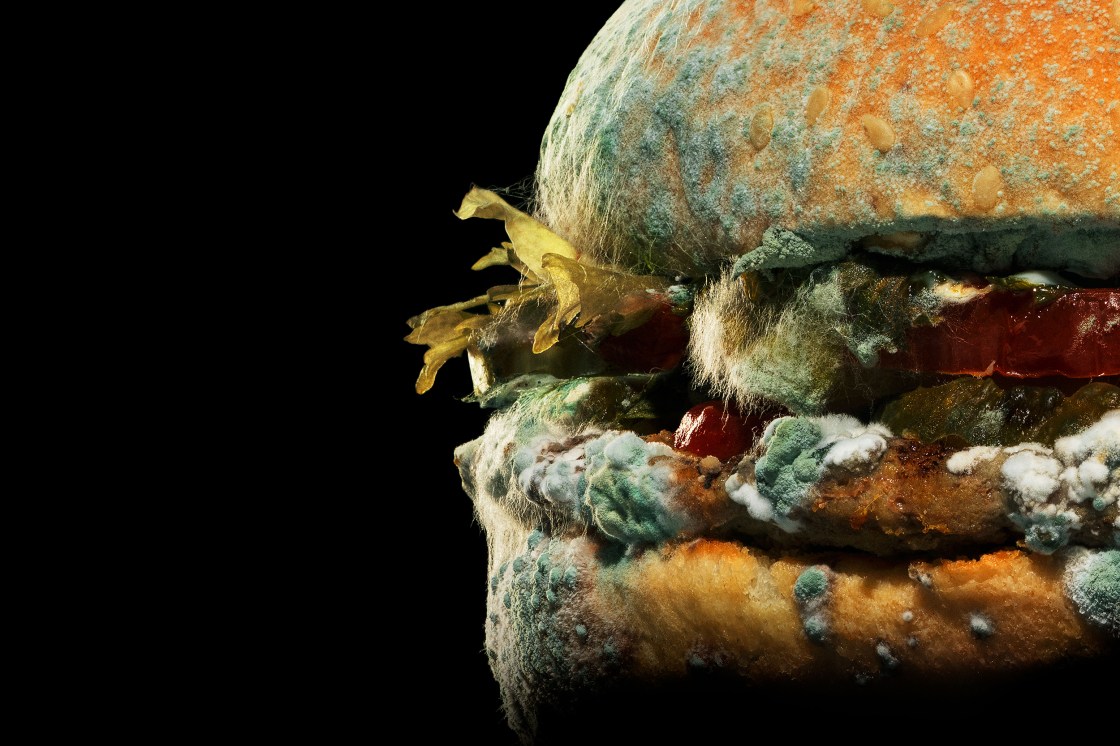 (CNN) — Burger King is re-“molding” the image of its signature Whopper in a nauseating new ad campaign that promotes efforts to eliminate artificial preservatives and other additives from the company’s menu.

The burger chain on Wednesday unveiled pictures of its new, preservative-free Whopper. In the campaign, the Whopper is covered in mold, decaying as it’s consumed by green fungus.

The unconventional marketing effort includes a TV commercial showing the all-natural Whopper slowly rotting over the course of 34 days as soul singer Dina Washington’s 1959 hit “What a Difference A Day Makes” plays in the background. Deliberately absent are food coloring and special effects commonly used to make restaurant meals and their ingredients look appetizing in commercials. By the end of the 45-second commercial, the Whopper has transformed into a green and blue mess.

“The beauty of no artificial preservatives,” the ad’s tagline reads.

The moldy Whopper may look revolting, but Restaurant Brands International, which owns Burger King, is betting customers are craving healthier, organic ingredients. Just over half of Millennials and 57% of Millennial parents said they are buying more organic products now than they did five years prior, according to a September YouGov analysis commissioned by Whole Foods. A 2018 Nielsen report also found young adults are more willing to pay higher prices for products made with natural, more environmentally-friendly ingredients.

Burger King restaurants throughout most of Europe have already done away with food preservatives amid an industry-wide shift toward healthier and organic ingredients.

“We believe that real food tastes better,” Restaurant Brands International Global Chief Marketing Officer Fernando Machado said in a statement. “That’s why we are working hard to remove preservatives, colors and flavors from artificial sources from the food we serve in all countries around the world.”

Whopper fans in the United States may have already tasted a preservative-free Whopper without realizing it, according to Christopher Finazzo, president of Burger King’s Americas division.

“The product is already available in more than 400 restaurants in the country and will reach all restaurants throughout the year,” Finazzo said in a statement.

McDonald’s, Burger King, and Wendy’s are the three largest burger chains in the United States. McDonald’s stopped using preservatives in some of its burger ingredients in 2018, two years after removing antibiotics from its chicken supply chain. Wendy’s did not immediately respond to request for comment.