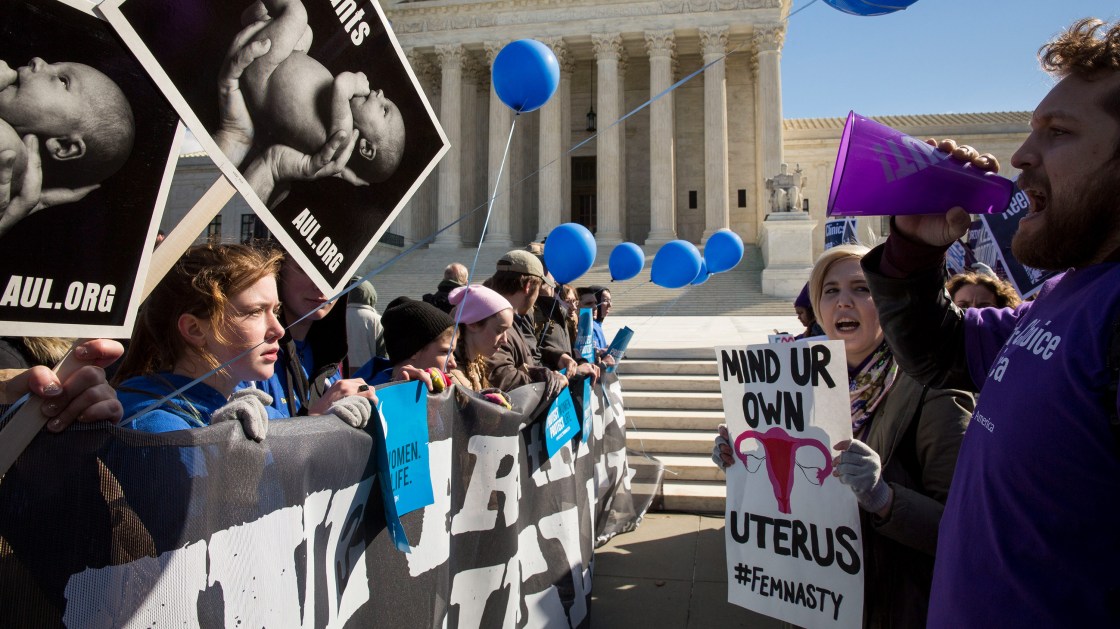 (CNN) — The Supreme Court appeared divided after over an hour of arguments Wednesday concerning a controversial Louisiana abortion access law that critics say will leave just one doctor in the state to perform the procedure.

Key justices indicated that they could be poised to uphold the law that is similar to a Texas law the Court struck down just four years ago. Chief Justice John Roberts and Justice Brett Kavanaugh both asked questions suggesting that the Louisiana law that requires doctors to have admitting privileges in local hospitals could serve a valid purpose.

But Roberts’ vote will be key and at the end of oral arguments it wasn’t completely clear where he would come out.

Justice Samuel Alito emerged as the strongest and most vocal supporter of the law and even questioned whether the doctors and clinics could actually bring the challenge. Conservative Justices Neil Gorsuch and Clarence Thomas said nothing, but they will likely back Louisiana as well.

Liberals, led by Justice Ruth Bader Ginsburg, strenuously questioned the law, suggesting it had not valid purpose for a procedure that is safe.

The case marks the first time President Donald Trump’s nominees — Gorsuch and Kavanaugh — have heard an abortion-related dispute at the high court. Supporters of abortion rights fear the Court’s solid conservative majority is poised to cut back or even gut court precedent. It comes as Republican-led states are increasingly emboldened to pass laws that mark a potential rollback of abortion rights.

While Louisiana argues the law that requires doctors to have admitting privileges at a local hospital will increase public safety, supporters of abortion rights say it will have a disastrous impact on women and represents a thinly veiled attempt to restrict abortion.

The case will be decided by July, just as the presidential election is heating up.

It was only in 2016, when Justice Anthony Kennedy was still on the bench, that the Court struck down a similar law out of Texas. Much has changed since then, however, as Kennedy has been replaced by Kavanaugh, who is considered more conservative on the issue.

“Disappointingly, we find ourselves back at the Supreme Court this term challenging a Louisiana law designed to shut down clinics,” said Nancy Northup, the President of the Center for Reproductive Rights, the group behind the challenge. She charged Louisiana with “openly defying” the Supreme Court’s 2016 ruling.

As is often the case, the vote of Roberts could be key. In 2016 he voted in favor of the Texas law, but last year, he sided with the liberals to block the Louisiana law from going into effect before the Supreme Court could hear arguments. Although heartened by Roberts’ preliminary vote, opponents of the law are nervous he simply wanted to freeze the state of play to give the Court time to have oral arguments and distinguish the circumstances in Louisiana from those in Texas.

Although he is a conservative justice, Roberts cares about the institutional reputation of the Court and might move cautiously before voting to overturn such recent precedent.

Louisiana’s Unsafe Abortion Protection Act, blocked since its enactment in 2014 is an effort, state officials argue, to “improve abortion safety by means of doctor credentialing.”

Louisiana Solicitor General Elizabeth B. Murrill says that clinics in the state have a “long disturbing” history of serious health and safety problems, abortion carries “known risks for serious complications” and that the act would bring abortion practice “into conformity” with the privilege requirements for doctors performing other outpatient surgeries. The penalty for violating the law is not more than $4,000 per violation.

As a threshold matter, Murrill argues that the justices shouldn’t even get to the merits of the case because the doctors and the clinics bringing the case don’t have the legal right — or “standing” — to be in court. Murrill notes that Louisiana women can challenge abortion regulations if they wish to do so — “as individual women have done in numerous other abortion cases across the country” — but that the clinics and doctors can’t stand in their place. She said that’s because the interests of a for-profit business that exchanges medical services for a fee might not align with patients seeking an abortion.

More than 200 members of Congress, including two Democratic House members, filed a brief in support of Louisiana on that point. They say there is an inherent conflict of interest between abortion providers and their patients when it comes to health and safety regulations.

“It is impossible for abortion clinics and doctors to share or represent the interests of their patients when they seek to eliminate the very regulations designed to protect their patients’ health and safety,” the lawmakers stated.

The Trump administration supports that position and argues that the law is valid. “Act 620 would not create a substantial obstacle to obtaining an abortion for a large fraction of Louisiana women seeking one — let alone all such women,” Solicitor General Noel Francisco told the Court.

The administration argues that the Court might need to narrow or overrule the Texas case from 2016 because it conflicts with the Court’s older precedent.

The claims are rejected by lawyers for the Center for Reproductive Rights, which is representing two doctors and an abortion clinic in the state who say that if the law had been able to go into effect when it passed, it would have forced the closure of two of the state’s three remaining clinics and left only one doctor with the ability to provide abortion care.

They argue the law serves no valid credentialing function and will force women to increase travel times and wait longer for the procedure. “Because Act 620 provides no benefits, it unduly burdens a woman’s Fourteenth Amendment right to pre-viability abortion,” Julie Rikelman, an attorney with the Center for Reproductive Rights, argued. She said that it is extremely hard to obtain admitting privileges in the state and that denials often have nothing to do with a doctor’s competency to provide abortion care.

Rikelman also rejects the notion that only women seeking abortions could bring the suit, noting that a woman would only have a narrow time frame to bring such a suit and that such litigation often lasts for years. She stresses the close relationship between doctor and patient.

Rikelman prevailed when a district court ruled in her favor after a trial, but then a panel of judges on the 5th US Circuit Court of Appeals reversed it.

The appeals court took the unusual move of engaging in some fact finding, a task often handled by district courts, and concluded that the doctors had not made a good faith effort to get the credentials.

“There is insufficient evidence to conclude that, had the doctors put forth a good faith effort to comply with Act 620, they would have been unable to obtain privileges,” the court held. “Instead of demonstrating an undue burden on a large fraction of women,” the court said, the law “at most shows an insubstantial burden on a small fraction of women.”