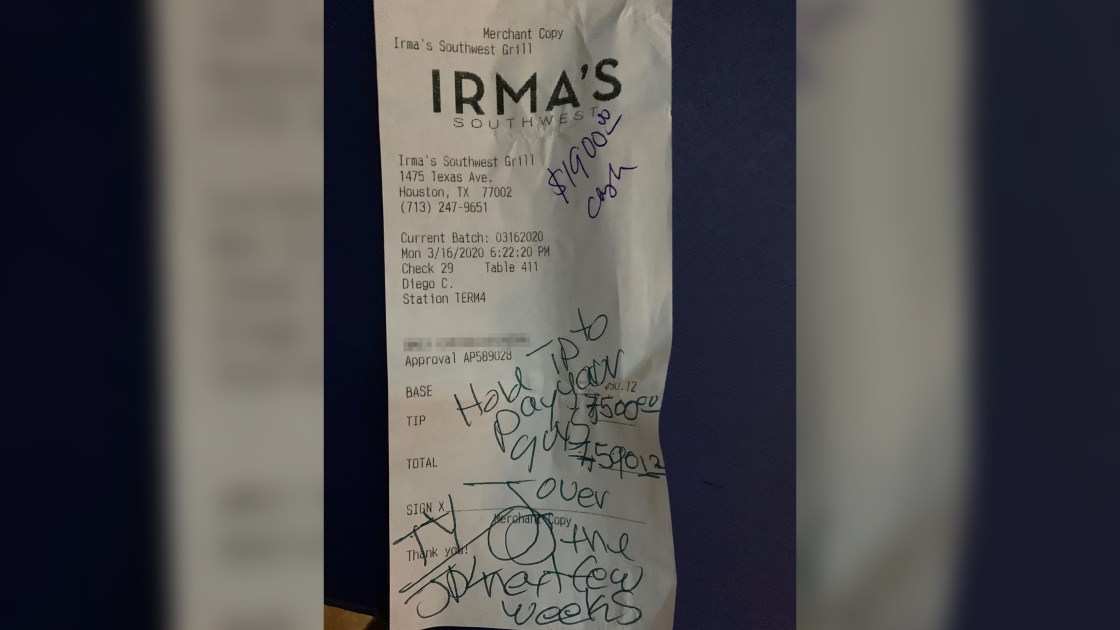 A couple left a $9,400 tip at a Houston restaurant to help staff get through coronavirus shutdown

(CNN) — The staff at a popular Houston restaurant got a $9,400 tip from some regular customers who wanted to help them get by during the coronavirus shutdown.

The couple came for an early dinner at Irma’s Southwest restaurant on Monday, after learning that all restaurants in the county would have to close their dining rooms and only offer takeout and delivery service, restaurant owner Louis Galvan told CNN.

“We didn’t expect it, to be honest with you,” Galvan said. “They left a gratuity for the entire kitchen and service staff, which is unexpected.”

The husband left a note on the receipt that said “hold tip to pay your guys over the next few weeks.”

Galvan said they would split the money among his 30 employees, so they’ll get about $300 each.

“They were amazed that a client would care enough about them to leave that amount to help them get through this tough time,” Galvan said.

He said they don’t know how long it will be before things get back to normal, but it will be a minimum of 15 days.

“We’re just trying to make it to that window where everyone has a consistent paycheck,” Galvan said.

The staff spent Tuesday cleaning and disinfecting the restaurant and getting the kitchen ready to sell take out meals starting on Wednesday. Galvan said the restaurant would offer a limited menu, including fajitas, their famous tamales and other popular Mexican dishes.

“We’re not even worried about profitability at this point. We’re in survival mode,” he said.

Galvan said the staff is still coming to work to keep the restaurant open even though it might be a while before he can pay their regular wages.

“Ultimately, they’re volunteering because we have no idea how long we’re going to be in this situation,” he said. “It could be 15 days, it could be 150 days, we don’t know.”

He said he knows some restaurants in the area are closing and letting workers go until the crisis is over, but he wants to support his employees and the community.

“We’ve been in Houston since the ’80s and, we just want to make sure whether we’re doing 10 meals a day or 100 meals a day that we’re here for our residents as much as we can be,” he said.