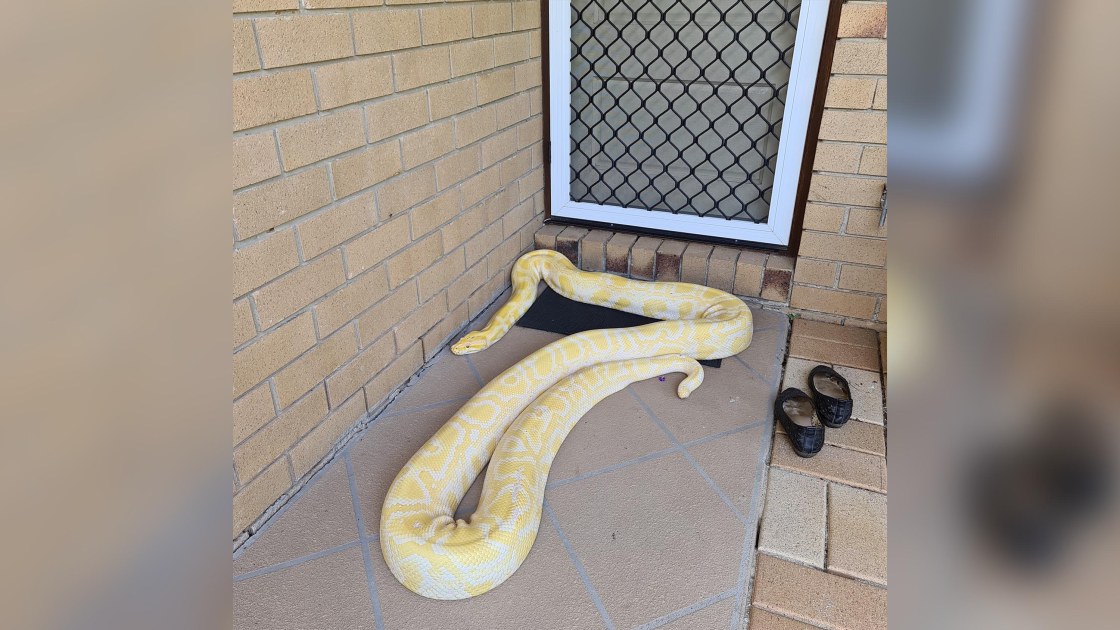 (CNN) — Australia is famously home to all sorts of exotic animals, including snakes.

However, one woman was still shocked to find a 4.5-meter (14.8-foot) albino Burmese python on her front porch in Oxenford, Queensland, on Monday.

The 50-kilogram (110-pound) snake was large enough to eat a dog, and removing the animal required the specialist skills of snake catcher Tony Harrison.

Harrison told CNN the snake is the biggest he has seen in more than 20,000 call outs since he started his business in 1994.

The unfortunate woman who found the snake was so taken aback she was still shaking when Harrison left her property, he said, but the snake catcher soon realized the huge reptile was docile.

“It’s been kept in captivity its whole life,” he said, describing it as a “gentle giant” and a “pussycat.”

When Harrison picked his son Jensen up from school he took him to see the massive snake in his truck and took photos of them both holding it.

Burmese pythons are illegal in Australia and this one must have escaped from its enclosure, Harrison said, adding that he has only found two of these sorts of snakes during his long career.

The first was just a meter long (3.3 feet) and about as thick as a human wrist, while this was one more than four times as long and “as thick as your leg,” he said.

The snakes pose a big threat to biosecurity if they escape, and this one was easily big enough to eat dogs and cats, said Harrison.

It was missing its tail and was covered in scars, he added.

Harrison later handed the snake over to local authorities, and told CNN it has already been put down.

Harrison documents his work on his Facebook page “Gold Coast and Brisbane Snake Catcher,” posting photos and videos of the snake relocations he carries out.

In December a Brisbane woman found a 10-foot python wrapped around her Christmas tree on her balcony.

Instead of calling in a snake catcher, the woman and her partner left the python to its own devices and it eventually slithered away.