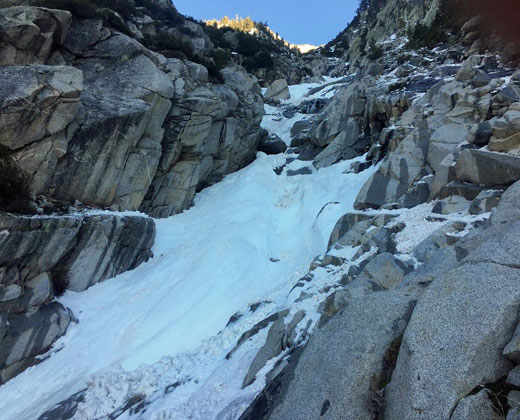 Two hikers were rescued by helicopter from the San Jacinto Mountains on Friday after a heatwave triggered an avalanche in the area.

Rescuers, Blake Douglas and Tyler Shumway called to the scene captured a second avalanche in a dramatic video that shows a portion of the powerful 90-second slide.

The Riverside Mountain Rescue Unit received a call at 3:30 p.m. from two hikers who were stuck at 7,000-feet elevation on the north face of the mountain along the Snow Creek route.

The hikers said they were unable to move up or down after being struck by an avalanche and losing their equipment.

“We got really heavy snow in the beginning of the month and then it turned around and got really warm really quickly so you’re seeing about 3 to 4 feet of snow getting some really hot, hot heat and melting very quickly,” avalanche expert and NBC Palm Springs Chief Meteorologist Mike Everett, said.

“It was over 100 degrees on the desert floor, and with the recent heavy snowstorm that occurred in early April, loose wet avalanches and rockfall were of primary concern,” Tyler Shumway, a member of the rescue team, wrote in a post on the unit’s website.

“Know the terrain,” Everett said. “Where these people were hiking is not a very accessible route even in the best of circumstances, they kind of went after a very aggressive route way too early in the season.”

A Riverside County sheriff’s helicopter crew flew the rescue team to a rock outcropping about 50 yards below the hikers.

“Even the best of us can have something go wrong,” Everett said. “That’s why they’re called accidents.”

One hiker was loaded onto the helicopter and transported to safety, while Shumway stayed with the second hiker. During their wait, another avalanche began rushing down. Video from the rescuers showed a portion of the powerful 90-second slide.

“It was utterly amazing to witness the raw power of the mountain. Being at 7,000 feet, they were at the worst spot since the entire north face of the mountain was being radiated by the sun and all the couloirs from Kristen Peak and San Jacinto Peak funnel into this chokepoint,” Shumway wrote.

The helicopter returned minutes later and evacuated the second hiker. No one was injured.

Officials urge anyone using the trails to exercise extreme caution as warm temperatures in the region continue to cause snow to melt on the mountain.

They suggest hikers wear bright colors, which can help rescuers find them in an emergency, and attempt a route only when it is clear that conditions are safe.