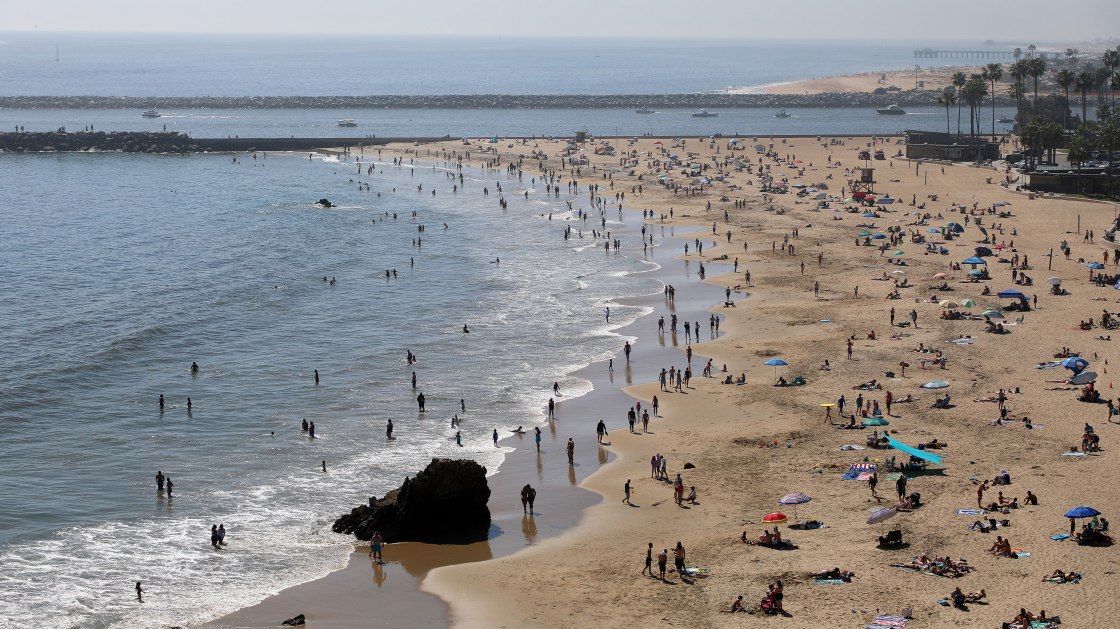 SANTA ANA (CNS) – State officials Thursday approved Orange County’s active-use plans for its 16% of shoreline, reopening all the county’s beaches a week after Gov. Gavin Newsom ordered them shut down when throngs crowded beaches in defiance of COVID-19-prompted stay-at-home orders.

Orange County’s plans mirror the hours and restrictions in each of the cities where the county has jurisdiction.

Last week, Newsom scolded Orange County officials for not doing more to discourage large gatherings on its beaches. The county had closed parking lots, but officials were not willing to close access to the beaches, and large crowds gathered there when they could not visit beaches in neighboring Los Angeles County.

Orange County Board of Supervisors Chairwoman Michelle Steel and Supervisor Don Wagner complained that Newsom made his decision based on newspaper photographs that they argued were deceptive because a telephoto lens made it appear beachgoers were closer together.

However, some Newport Beach City Council members said the crowds were so large it felt like the Fourth of July.

Huntington Beach and Dana Point sued to block Newsom’s order, but failed to win a temporary restraining order on Friday. Huntington Beach officials, however, were continuing to go forward with the lawsuit, city attorney Michael Gates said, and Newport Beach City Councilman Kevin Muldoon, on his own, sued in federal court.

The Orange County Board of Supervisors on Tuesday voted 3-2 after a fiery debate to direct staff to submit a plan for the reopening of its beaches. Orange County Supervisor Lisa Bartlett, who represents much of the south county beaches, pushed for the active-use plan.

“The city is very pleased to reopen our beaches for the physical and mental well being of our residents,” Newport Beach Mayor Will O’Neill said.

“While the active recreation model was not the preferred choice by the City Council, after discussions with our public safety personnel, we are confident that city staff will manage the beaches effectively under the approved plan.”

Pope said enforcement of the new “keep moving” rules was mostly about seeking voluntary compliance on Thursday. Video shots of the beaches showed many beachgoers sunbathing, which is not allowed.

“The things we’re looking for are the obvious indicators like someone is planning to camp out for a long stretch,” Pope said. “Lifeguards are looking for canopies, tents, umbrellas. We see them out there and when we do see them our lifeguards will try to educate those folks and say, `Hey, we can’t have that under the current rules.’

“Some of them have been cooperative and some less cooperative, but right now we’re trying to educate versus cite. And if we do need to the police can be called in and we can have the ability to issue citations. But we’re not trying to do that now. We’re trying to let people know the rules.”

“We’re prepared to do our best to carry out the state’s order,” Pope said.

Newsom on Wednesday praised Newport Beach officials for their “collaborative spirit” in working out its plan.

“That’s the spirit that will allow us in real time to make judicious decisions,” Newsom said.

O’Neill said the city will try to get beachgoers to voluntarily comply with the new rules before having to resort to citations.

The city’s boardwalk on the peninsula, the popular Wedge surfing spot and the parking lots will remain closed, Pope said.