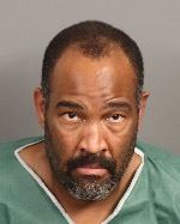 A registered sex offender accused of fatally slashing his 1-year-old daughter prior to throwing her off a cliff in the mountains south of the Coachella Valley, and also attacking the child’s mother and a good Samaritan, pleaded not guilty Tuesday to first-degree murder and other felony charges.

Adam Slater, 49, was arrested Thursday night in connection with a spate of crimes the previous day that culminated in a rollover car crash on Highway 74 near Pinyon Crest, where he allegedly threw his daughter over “a steep cliff into a ravine,” according to Riverside County sheriff’s Sgt. Ben Ramirez.

In addition to murder, Slater is charged with attempted murder, assault on a child under 8 years old resulting in death, assault with a deadly weapon and resisting arrest.

According to the sheriff’s department, last Wednesday’s series of events began about 14 miles from the crash site in the 41000 block of Washington Street, outside the Southwest Community Church in Indian Wells, where deputies responded to a stabbing call about 8:30 a.m. that was described as a “domestic violence incident.”

Deputies located an injured woman who was taken to a hospital with non-critical injuries.

Reports stated that Slater and the woman — who was six months pregnant at the time of the attack — were married, and the year-old daughter was theirs together. The woman was treated for multiple stab wounds and is recuperating at home, the television station reported.

Following the attack, Slater allegedly sped away in a vehicle with the child. Deputies learned soon afterward that a rollover crash reported about 9 a.m. on Highway 74 around six miles south of Palm Desert could be connected to the original call.

According to sheriff’s officials, passing motorists attempted to help Slater and his daughter escape the wreckage, but he allegedly stabbed one man attempting to help rescue his daughter.

“The suspect then took the girl from the arms of the male he stabbed. Multiple witnesses saw the suspect take the child and throw her over a steep cliff into a ravine,” according to a sheriff’s statement.

The child died at the scene. It was not clear whether she was already dead prior to being thrown off the cliff.

Slater ran down into a canyon, where deputies detained him after a short foot chase, and he was taken to a hospital for treatment of injuries connected to the crash, according to the sheriff’s department. Slater was discharged from the hospital the next day and arrested shortly afterward.

It was unclear if the man he allegedly stabbed required medical treatment. 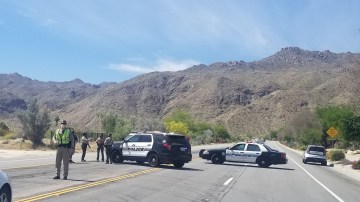 Slater was in violation of the terms of his parole, according to California’s Megan’s Law website. He was convicted in 1995 of sexually penetrating a victim with a foreign object by force and served about two years in state prison before being released in 1997.

The website did not provide specifics about his parole violation.