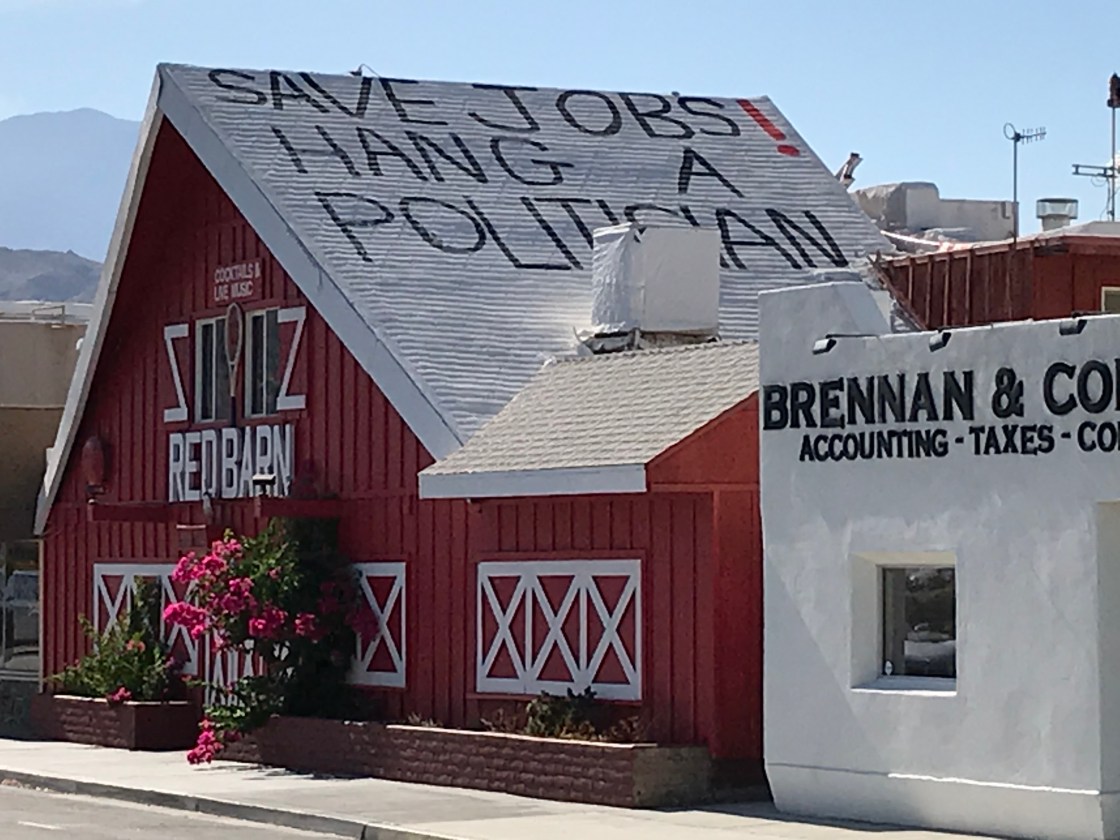 Owner John Labrano received a letter from the State Alcoholic Beverage Control saying if he served guests he would lose his license.

Saturday morning crowds of more than 50 people gathered outside the Red Barn with plans of going in before Labrano made his announcement.

Many of his customers said they were ready, and support, a reopening.

“I am a patriot and I believe in freedom, so I am here to support it for that principal. His message on the roof is a little distasteful to me, but I still support what he is trying to say. If the big box stores can do this, the larger businesses, then the small businesses should be able to as well,” said Cathedral City resident Toni Ringlein.

Red Barn customers gathered in front of the bar for about an hour and tacos were served curbside until 2:00pm.

They also gathered down the street at Little Bar where take-out was being served.

The Red Barn bar has been a topic of discussion after their rooftop signage caught the eye of passerbys, now the owner says he plans to reopen his bar.

“There’s some political type of tug and war and the American people are in the middle of it. And you know what? I don’t need the states help, I don’t want the states help, I just want to run my business and take care of my family,” said John Labrano, owner of the Red Barn.

The city of Palm Desert says they check on businesses on a reactionary basis.

“Code compliance will go out, make contact with the owner if they are open, educate what the governor’s order says. we are aware of the potential opening as well as the local office of the Alcohol and Beverage Control is also aware,” said Ryan Stendell, the director of community development for Palm Desert.

The California Department of Alcohol and Beverage Control also provided a statement saying, “any licensee who has continued to operate despite the dpepartment’s efforst to persuade them to voluntarily comply could result in the suspension or revocation of the license.”

Lobrano plans to open anyway, and has left the painted sign on his rooftop, and even though the City of Palm Desert has an ordinance that prohibits rooftop signs, the city attorney says the First Amendment in the U.S. Constitution protects free speech and they are unable to regulate the type of “political expression.”

Others now question if other businesses would be able to make similar statements posting their own signs.

“It is a freedom of speech issue, we’ve dealt with it before in palm desert, we have to allow people to have their constitutional rights when it comes to freedom of speech. again it would be a whole lot more effective I believe if you put something positive up there,” said Jan Harnik, Council Member, City of Palm Desert.

NBC Palm Springs reached out to Red Barn, they have yet to get back us, but they did post a statement on their Facebook page defending their message, saying in part … “I’d rather die the old fashioned way, alcoholism, a heart attack.”

Some are supporting the bar, cheering them on, saying they will be there when they first open, “keep the writing on the roof.”

Others on social media are asking to hold the city council accountable for not acting on the violations.

After speaking with Council Member Harnik, we reached out to other members on the council and the city attorney, but they were not available for comment.

The council says this matter will not be on their agenda for Thursday’s city council meeting but did offer an opinion on the messages.

NBC Palm Springs did speak to local attorneys off-camera today and one did mention that while people exercise their freedom of speech they should still be in compliance with state and local laws.