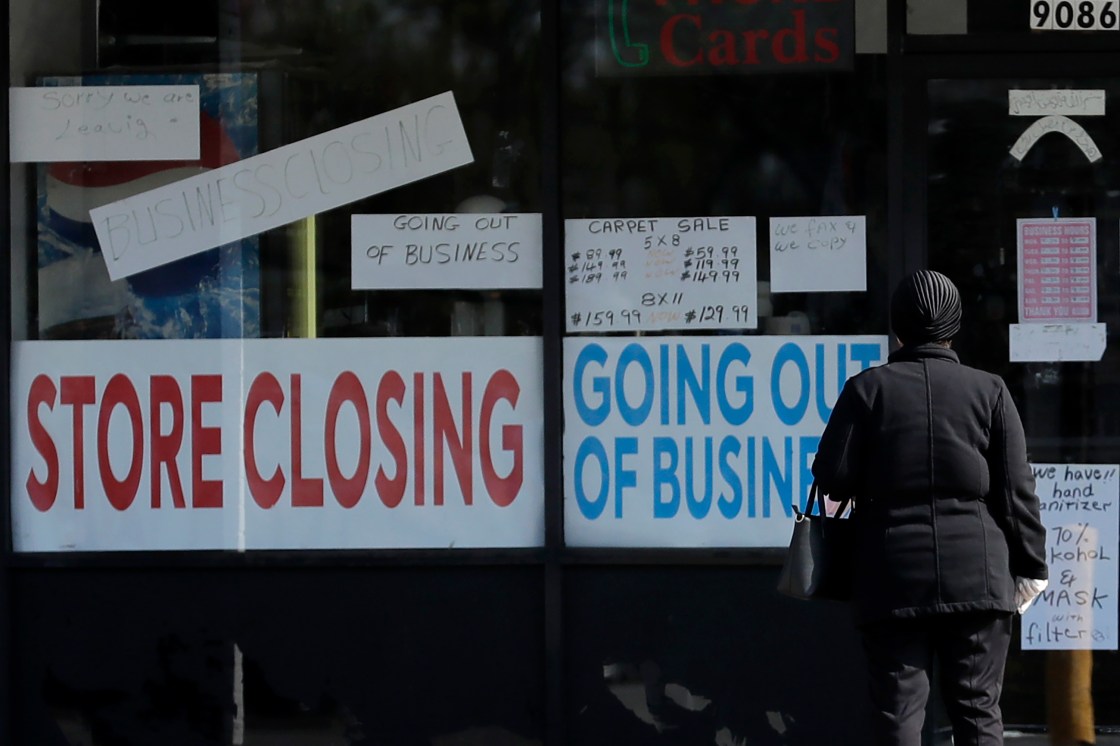 Millions of Americans are relying on unemployment benefits for their livelihoods after losing their jobs to the coronavirus crisis.

Another 3 million people filed initial unemployment claims last week on a seasonally adjusted basis, according to the Department of Labor.

That brings the total number of first-time claimants to 36.5 million since mid-March. That represents 22.4% of the March labor force. America’s labor force shrank in April, as the crisis worsened.

Without the seasonal adjustment, first-time claims were slightly lower at 2.6 million.

Last week’s claims exceeded economists’ consensus expectations by nearly 500,000. Even so it was the eighth week in a row that the number of initial claims was in the millions. But the figure has decreased over the last six weeks, after peaking at 6.9 million in the final week of March. Economists say this is relatively good news because it means claims are heading in the right direction.

Last week’s number might also be revised down further in the next data release. The Connecticut Labor Department said Thursday afternoon that its initial claims number was overstated due to a “data entry reporting error”.

While the report counts 298,680 first-time claims in Connecticut last week, the state actually only registered 29,846 claims, a representative of the state’s Department of Labor told CNN Business.

Initial jobless claims are one of the most “real-time” measures of the economy. Most economic data lags behind by weeks if not months. That’s why the weekly claims data are so important during this crisis. Still, the numbers don’t include people filing claims for the government’s emergency funds.

But now that initial claims have been falling for two months straight, economists are beginning to shift their focus to continuing jobless claims, which count people who are filing multiple weeks in a row but trail the report of initial claims by a week. That number stood at 22.8 in the week ended May 2, up slightly from the prior period.

A decrease in continuing claims could signal that the reopening of the economy is successful in getting people who lost their jobs from the lockdown are re-entering the labor market.

Kentucky remained the state with the largest percentage of the March labor force — 36.2% — filing for regular unemployment benefits.

According to the Bureau of Labor Statistics’ monthly jobs report, America lost more than 20 million jobs in April alone, pushing the unemployment rate to 14.7%. But predictions for the May unemployment rate are even higher. Goldman Sachs said earlier this week it expected a rate of 25%. Unemployment claims do not equal lost jobs, as the two data points are based on different surveys. The survey the unemployment rate is based on wraps up around the middle of the month.

As states begin to reopen their economies in the coming weeks, the rehiring workers should offset further layoffs, said Paul Ashworth, chief US economist at Capital Economics. This means peak unemployment could be near.

In addition to regular unemployment insurance, nearly 842,000 people in 29 states last week filed initial claims for the pandemic unemployment assistance program, which Congress created to provide benefits to independent contractors, the self employed, gig workers and certain people affected by the coronavirus. That’s in addition to the almost 1.8 million Americans who filed first-time pandemic program claims over the two weeks ending May 2. All these applicants are not included in the seasonally adjusted data for the traditional unemployment program.

More than 3.4 million Americans in 23 states were receiving benefits under the PUA program in the week ending April 25, a spike of more than 2.4 million in seven days. Michigan had the highest number of residents filing initial claims and receiving payments under the pandemic program, followed by California.

Spending on unemployment benefits has skyrocketed to more than $100 billion so far this fiscal year, a huge jump from only a few weeks ago, according to Treasury Department data.

Federal and state outlays totaled just under $102 billion, as of May 12, up from $12.7 billion at the beginning of March.

Nearly $37 billion has already been spent this month alone.

In April, the federal government paid out nearly $27 billion in unemployment benefits as the money from Congress’ historic enhancement to the program started to flow, Treasury Department data shows.

Lawmakers in late March approved a $600 boost to weekly payments for up to four months and added 13 weeks to benefits, both compliments of the federal government. Also, they expanded eligibility to independent contractors, the self-employed, gig workers and certain people affected by coronavirus through the end of the year — also federally funded. The measure was expected to cost about $260 billion when it was passed as part of a $2 trillion coronavirus relief package.

States, meanwhile, delivered just over $21 billion in benefits in April, up from about $4 billion the month before.

The combined $48 billion paid out in April is the equivalent of more than triple the amount distributed at the monthly peak of the Great Recession, after adjusting for inflation, according to a new report from The Hamilton Project at Brookings Institution.

Unemployment benefits offset a small portion of personal income decline in March, but roughly half of lost wages and salaries in April, according to the researchers’ preliminary calculations.

As more Americans join and remain on the unemployment insurance program, spending will continue to skyrocket. The outlays to date show that states have struggled to handle the surge in claims and to implement the federal provisions, said Ernie Tedeschi, an economist at Evercore ISI and former Treasury official.

“States have been slow to integrate the new emergency payments for regular unemployment insurance beneficiaries, and states have been super slow in implementing the brand new PUA benefits,” said Tedeschi. “This shows states have catching up to do.”