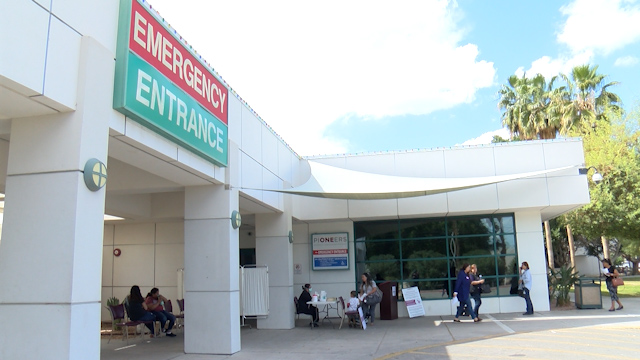 Hospitals in neighboring Imperial County saw a recent surge in Covid-19 patients and had to divert patients elsewhere.

In the past 48 hours, both county hospitals, El Centro Regional Medical Center and Pioneers Memorial Healthcare District had to stop accepting patients with the virus and now swift action from FEMA as they plan to set up a federal medical station at Imperial Valley College.

Both hospitals announced early Tuesday that they were at capacity with Covid-19 patients and had to begin diverting people elsewhere for treatment.

“We believe they are coming from Mexicali but they are not Mexican nationals, they’re U.S. citizens. they are coming to us because unfortunately there was an announcement from our understanding that the hospitals there are not accepting Covid patients,” said Dr. Adolphe Edward, CEO of El Centro Regional Medical Center.

As of Wednesday morning, both hospitals were taken off of divert status due to the transferring of around 40 positive Covid-19 patients who were taken to regional healthcare facilities across southern California.

And more help is on the way, The National Guard along with the California Medical Assistance Team will be setting up an 80-bed federal medical station at Imperial Valley College.

“What is being done is in preparation for additional surges that may occur is the coordination of establishing and emergency field operations center similar to the one in riverside county,” said Assemblymember Eduardo Garcia of California, serving the 56th District.

The surge has calmed for now, but Assemblyman Garcia explains that it can quickly pick back up.

“When you have a community of 180,000 residents but right on the other side of the border you’ve got 1 million people, and of those 1 million people, thousands of them cross the border every single day to work. and occasionally those types of circumstances will also add to the challenges as it relates to not just healthcare services, but public safety,” explained Garcia.

Imperial County health officials are crediting swift actions taken by the state to get this medical station set up and they expect equipment and supplies to start arriving Friday morning and the facility to be up and running within the next seven days.