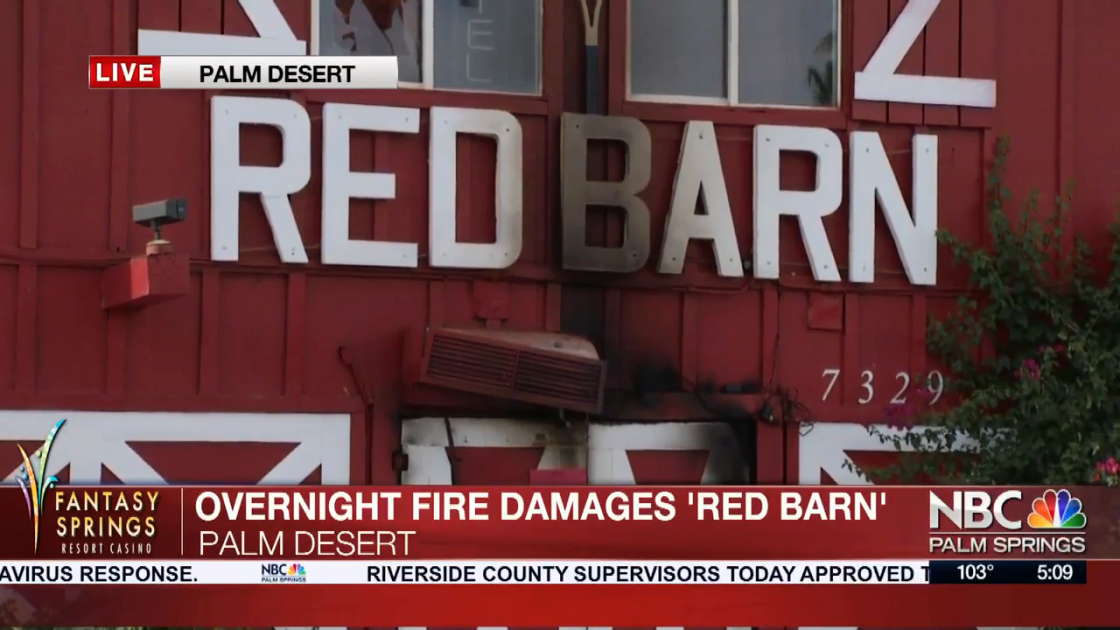 PALM DESERT (CNS) – The owner of a popular Palm Desert bar he kept open despite a coronavirus-related closure order said Wednesday he intends to rebuild after it caught fire — a blaze he blamed on vandals.

“It appears the Red Barn has been victim of violence and destruction, along with other responsible businesses in the Coachella valley including the Republican party headquarters in La Quinta,” owner John Labrano wrote on the bar’s Facebook page on Wednesday. “The Red Barn intends on rebuilding at the earliest possible time.”

Firefighters needed more than an hour to extinguish the blaze at Red Barn at 73289 Highway 111, which was reported about 3:40 a.m. Tuesday, according to the Riverside County Fire Department.

Heavy smoke was coming from the front of the building when crews arrived on scene, the department said.

Firefighters knocked down the blaze about 4:45 a.m. Photos from the scene show the roof and a portion of the front of the building were damaged, although the extent of the internal damage was not immediately known.

The fire followed an afternoon of protest several blocks away on Monday stemming from last week’s in-custody death of George Floyd in Minneapolis.

The cause of the blaze remains under investigation.

Last month, Labrano opened his doors for patrons to shoot pool and congregate despite the coronavirus-related stay-at-home order. The Department of Alcoholic Beverage Control threatened to take his liquor license if he reopened, so he apparently did not sell liquor, but tacos were given away outside.

Labrano compared the Red Barn fire with another blaze allegedly sparked by somebody intentionally at the East Valley Republican Women Federated office, in the 78-800 block of Highway 111 in La Quinta, about 1:30 a.m. Sunday.

Arriving firefighters quickly extinguished a small fire burning inside, fire officials said. No injuries were reported, and neither was any extensive internal damage beyond broken windows.

RWF President Joy Miedecke told City News Service building surveillance footage showed a man set the fire after breaking the windows with a baseball bat. She said authorities are on the lookout for the man.

Labrano came under fire last month for threatening to reopen his bar despite the stay-at-home order in place due to the coronavirus. He then took to the bar’s roof, broadcasting controversial slogans seemingly in frustration including, “Save jobs! Hang a politician,” “Suck my governor, we r essential” and “Make Palm Desert great again.” Despite backlash on social media over the vulgarity of some of the messages, the city announced no laws had been broken.

Labrano briefly opened his doors on May 16, but media reports indicated no alcohol was served.

“We’ve been here for 50 years and we plan on staying for another 50+,” he wrote on Facebook Wednesday. “Thank you to all the supporters and patrons. Let’s continue to make Palm Desert, the Coachella Valley and the country great again. God bless you all and god bless America.”