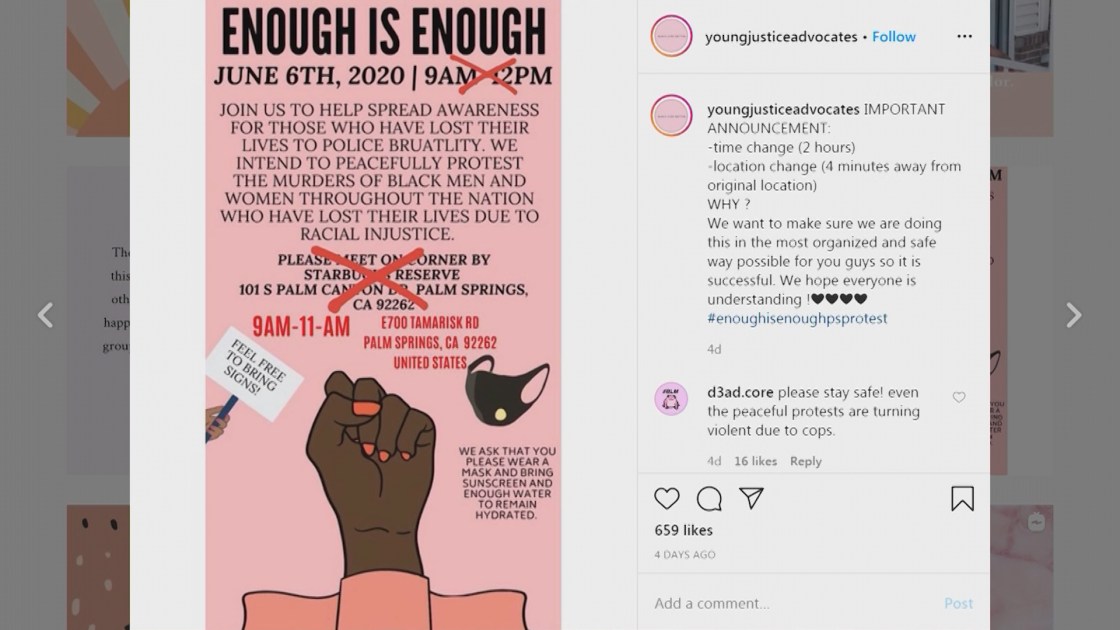 Another peaceful protest is set to take place at Ruth Hardy Park in Palm springs Saturday morning. The demonstration is being called “Enough is Enough” and was created by a group of local teens in Coachella Valley.

NBC Palm Springs spoke to organizers who are working with police officials to keep the event a safe one. Over the past week protests here in Coachella valley have been peaceful.

“That the valley stands with Black Americans in this country as well as minorities, and that although we are young, we will not accept this injustice as apart of our reality,” said Hina Malik, Organizer of Young Justice Advocates.

The group’s Instagram page has over 2,000 followers and organizers say they expect the crowd to be young, and speakers will be present deliver a message.

“To speak on police brutality, anything that is happening through the nation, or personal stories that they’ve have because most of them are Black Americans,” said Amor Toland, Organizer with Young Justice Advocates.

Police officials earlier in the week said they expect the day to remain peaceful.

“Right now there is absolutely no zero information that there is going to be violence, property damage, but we’re prepared to deal with it if it does happen,” said Captain Mike Kovaleff with Palm Springs Police Department.

“We just want to show the world that basically the Coachella valley understands what’s going on and we’re not going to be silent,” explained Toland.

“When we see in our community that the news is actually showing just how peaceful and passionate our valley is, it’s very inspiring and it gives us hope,” added Malik.

A peaceful protest is exactly what they are hoping for Saturday in palm springs, again that event will begin at 9 a.m. at Ruth Hardy Park.