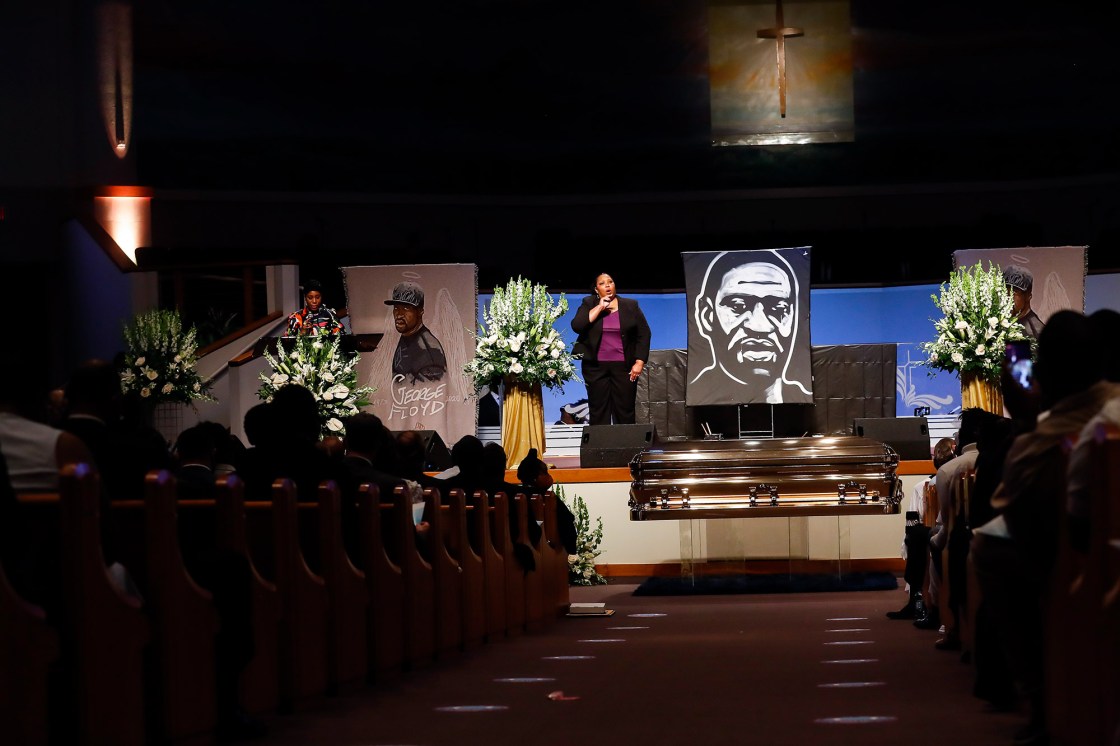 George Floyd Remembered as a World-Changing Figure at his Funeral

“He’s going to change the world.”

The poignant eulogy to George Floyd delivered by his brother Rodney on Tuesday is already at least partially true, although how deep and enduring that change is will be decided by future struggles.

In a span of mere days, the death of a black man with a white policeman’s knee on his neck became a parable in America’s aching racial story and a rallying point for action that resonated far beyond Minnesota, where he died, and disrupted politics, business, culture and sports. Floyd’s impact has spanned continents — sparking debate and reflections across the Atlantic in Europe.

Barely known outside his own circle, Floyd suddenly became the most famous man in the world, shouldering the pain of the racially oppressed everywhere with his dying words, “I can’t breathe.” Yet he will never know of his fame nor perceive the change he has wrought.

Across the US, policing guidelines are being torn up and task forces are forming to address reform. The NFL admitted it had been wrong to not listen to its players about racism. In Britain, there are demands for statues honoring the authors of colonialism to be torn down. European sports stars are taking a knee to honor Floyd. The opinion editor of The New York Times, meanwhile, is out of a job after publishing an editorial that called for troops to deal with protests around the country.

The wave of protests spurred by Floyd’s death and the societal turmoil it triggered will almost certainly ebb in the days after his body was carried to his grave on a horse-drawn carriage, almost with the trappings of a state funeral for a national hero.

It will be days, weeks or months before the lasting, catalytic impact of his passing can be properly assessed. But already, reforming the police to eradicate racism in the ranks after a non-ending list of deaths of African American men in custody is now a political default in Washington, as CNN’s Abby Phillip pointed out.

The move reflected fast-shifting social currents after an extraordinary period when a nationwide and ultimately peaceful uprising drove a once-in-a-century pandemic into the background.

The thronged streets of US cities in support of the Black Lives Matter movement were a reminder that change really comes in America only on the back of a roused and insistent populace.

At another time, things might have been different. But in a season of sickness and fear, the power of grass roots sentiment stressed the power of humanity to write its own fate, and may have actually gathered intensity as an outlet after weeks of coronavirus shutdowns.

There are plenty of reasons to doubt Rodney Floyd’s prediction.

The country’s hopelessly fractured politics and past recoils against moments when racial progress was forged offer cautionary lessons. Yet when civil rights icon Rep. John Lewis comments that he’s never seen such racially mixed crowds marching for justice, as more white citizens than ever before walk metaphorically in the shoes of their African American brethren, it’s clear a mystical political force is in play.

In an odd way, Floyd’s death is also a sign of the country’s undiminished cultural relevance abroad, despite an “America First” President who has alienated many of its friends.

In France, Floyd’s death has shifted policies that many instances of police brutality toward French people of color could not. Chokeholds used by arresting officers are now banned. Floyd’s suddenly ubiquitous face peers out from murals in Kenya, the West Bank and, in a historical confluence hinting at the power of change, from a preserved section of the Berlin Wall. Canadian Prime Minister Justin Trudeau wrestled for 21 mute seconds when asked to comment on the sight of security forces driving away protesters ahead of a President Donald Trump photo op outside an iconic Washington church.

In another, apparently random but ultimately connected act, marchers gathered at Oxford University to demand the removal of a statue of fervent imperialist Sir Cecil Rhodes, who gave his name to US Rhodes scholarships. The program will now surely need a rebranding.

Floyd’s death is also sparking the revival of a debate over the complicated racial past of Winston Churchill, who is regarded by many as history’s greatest Briton. The wartime Prime Minister is lauded for his leadership in defeating Nazism and working with President Franklin Roosevelt to save Western democracy, but his enthusiastic support for the British Empire led demonstrators to deface his statue in London’s Parliament Square with a slogan calling him a racist.

And Dutch Prime Minister Mark Rutte confessed he’d had a soul-searching rethink on a local tradition of dressing in blackface at Christmas.

US enemies like Iran and China also noticed the tumult. They were quick to portray Floyd’s death as state-sanctioned murder, seeking to undermine Washington’s demands for political change in their repressive societies.

Floyd’s death has crossed from politics into culture and sports.

German Bundesliga soccer players emulated NFL quarterback Colin Kaepernick and took a knee before games. NASCAR driver Bubba Wallace will race around a Virginia track Wednesday in a black liveried car daubed with the slogan “Black Lives Matter” in the series that is widely popular in the Deep South. The PGA Tour, not known as a bastion of radical liberals, will reserve the 8:46 a.m. tee time for a moment of silence when professional golf resumes play on Thursday morning– honoring the exact duration that Floyd lay on the ground in Minneapolis under the police officer’s knee.

In American corporate boardrooms and newsrooms, a new reckoning about race and discrimination is under way, with many employees considering for the first time the reality of discrimination understood only too clearly by their minority colleagues.

Meanwhile, a squad of former chairmen of the Joint Chiefs of Staff broke cover to rebuke a sitting President in an unprecedented manner after he threatened to deploy active-duty troops to the states and inaccurately portrayed several days of violence and looting as a reflection of all protesters.

Some of the change of recent weeks is irreversible. It’s no exaggeration to say some minority citizens may not die because chokeholds have been outlawed in many jurisdictions.

But Floyd will likely not be the last African American man to die in a case resonant with racial overtones. If the arc of history bends toward justice, it is a long and meandering process. His death has not changed the reality of being black in America — or elsewhere. African American dads will still have to talk to their kids about how to behave around police officers. The coronavirus, which has disproportionately hit black people, is making its own societal comment about the disparities in US society.

And while reforming the police is now on everyone’s lips, the half-life of enthusiasm for political change in Washington can quickly ebb. The best intentions are also easily sullied in election season. Efforts by Trump and his conservative media supporters to link all Democrats to liberal colleagues demanding the defunding and the dismantling of the police are proof of that. Former Republican presidential nominee Mitt Romney, who was accused of doing too little to appeal to people of color when he lost the 2012 presidential election, is one of the few GOP senators to stand up to Trump. Still, his evolution and show of conscience are notable.

Democrats have their own contradictions to address. Presidential candidate Joe Biden, who is seeking to fill the leadership vacuum left by Trump, is strongly identified with criminal justice legislation in the 1990s that many campaigners see as a contributing factor to institutionalized racism.

Great change can also trigger counter-reactions. And one thing Floyd’s death did not alter is the reality of a President whose reflex is to resort to racial rhetoric to advance his own political ends.

Proving that there is not a bottom, Trump drew fresh ridicule on Tuesday to talk that he might attempt a healing national address by suggesting that a video of a police officer pushing a 75-year-old protester in Buffalo, New York, roughly to the ground was a “set up.” In a sign of how Republican senators may prove an impediment to change, many would not even allow journalists to read the tweet to them on Tuesday — as if ignorance of the President’s glorification of videotaped police violence let them off the hook.

The White House and aides spent recent days arguing that there is not systemic racism in the criminal justice system — despite plentiful evidence to the contrary.

But one of the enduring images of the last few weeks may turn out to be the sight of the White House ringed by a high black fence, with the President figuratively and literally walling himself off from the shifting political winds outside.