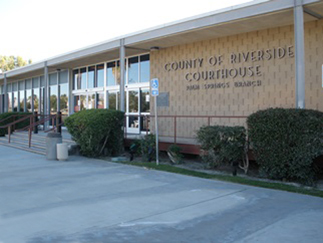 RIVERSIDE (CNS) – Four Riverside County courthouses that were shuttered nearly three months ago due to the coronavirus pandemic will remain closed to the public until the end of the month because of ongoing concerns about COVID-19, Superior Court officials announced Thursday.

The Corona, Hemet and Temecula courthouses,  along with Moreno Valley Traffic & Small Claims Court, were slated to reopen on Monday. Presiding Judge John Vineyard decided that it was too soon, even though in the last two weeks, the Superior Court has returned four courts to operation, with public health safeguards in place.

According to the Superior Court Executive Office, the four closed courthouses are now scheduled to reopen to the public on June 29. There was no specific reason given for the postponement, other than the need to ensure that the courts comply with newly established health protocols before they go back into operation.

The Palm Springs Courthouse, Riverside Family Law Court and Riverside Historic Courthouse opened their doors this past Monday, coming on the heels of the Banning Justice Center’s return to limited operations on June 1.

Staff are enforcing social distancing and facial covering rules at all of the reopened facilities, according to the Superior Court.

The facilities were shut down in mid-March, and the Riverside Juvenile Dependency Court on Farm Road was closed on April 13, as part of the court’s participation in COVID-19 containment. The juvenile court was re-opened before the end of April after all staff tested negative for the virus.

Vineyard is responsible for all closure orders, but officials pointed out that he’s consulting judges in every region of the county to gather consensus.

Under an order originally issued March 16, most operations — and all public access — at the courthouses now due to reopen were suspended.

Since that time, the downtown Riverside Hall of Justice has remained open daily from 9 a.m. to 2 p.m., along with the Indio Larson Justice Center, the Southwest Justice Center in Murrieta and the Blythe Courthouse.

The Superior Court’s web portal remains available, though the timely updating of information on cases has been impacted.

In March, the Superior Court implemented a series of policy changes that remain in force, all of which were based on the need to safeguard against coronavirus.

The foremost action was to halt criminal jury trials. However, those are now set to begin again over the next several weeks. Civil jury trials are suspended until at least the first half of August.

Parties who require additional information were encouraged to visit http://www.riverside.courts.ca.gov, or call the court at 951-777-3147.