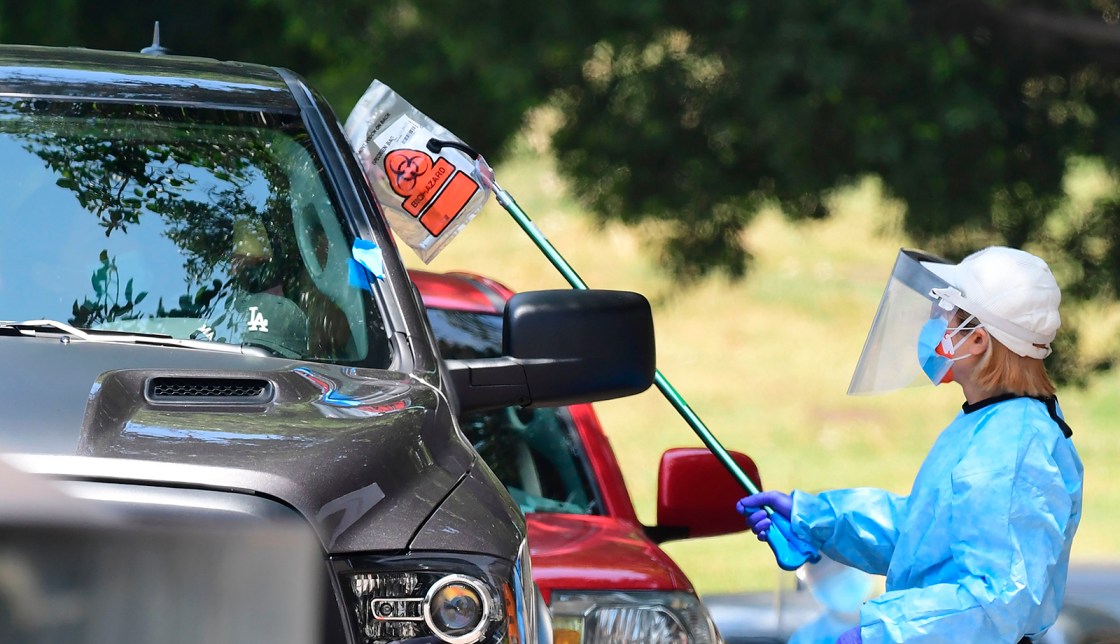 U.S. sees a record number of new coronavirus cases in a single day

The United States saw a record number of new coronavirus cases in a single day with 37,077 reported Thursday, according to Johns Hopkins University.

Coronavirus has infected more than 2.4 million people and killed over 124,000 in the United States.

Thursday’s total eclipses the previous high on April 24, when 36,291 new coronavirus cases were reported across the country.

Meanwhile, as coronavirus numbers skyrocket, some states are holding back on easing restrictions. Texas Gov. Greg Abbott paused any further phases to reopen the state on Thursday and issued an order to ensure hospital beds be available for Covid-19 patients.

Abbott’s moves came as his state, California and Florida — the three-most populous — set records for new coronavirus cases daily amid fears of “apocalyptic” surges in major Texas cities if the trend continues.

Florida Gov. Ron DeSantis also indicated that his state would not be moving to relax present restrictions.

California Gov. Gavin Newsom declared a budget emergency to free up $16 billion to fight the pandemic, according to a release from his office.

The state could pause further reopening of its economy — and even “toggle back” — if health officials continue to see increases in infections and hospitalizations, Newsom suggested at a press conference Thursday.

And the head of the US Centers for Disease Control and Prevention said the US has only counted about 10% of coronavirus infections. That might mean as many as 20 million Americans have been infected.

Officially, coronavirus has killed at least 122,481 people and infected more than 2.4 million nationwide, according to Johns Hopkins University.

Florida and Texas announced Wednesday that they had recorded more than 5,000 new Covid-19 cases the prior day, a new daily record. California reported more than 7,000 cases, obliterating a record hit a day earlier.

Hospitals in California have seen a 32% increase in patients with the coronavirus over the last 14-day period, reaching an all-time high since the pandemic began, Newsom said. The number of patients in intensive care units has reached a record high after increasing 19% over the last two weeks.

Florida passed 5,000 again on Thursday, according to new state data.

Florida, Texas and California account for 27.4% of the 328 million people living in the US, according to the latest US Census Bureau estimates.

Abbott previously had said he wanted to move to the next phase and be fully opened by July 4.

“The last thing we want to do as a state is go backwards and close down businesses. This temporary pause will help our state corral the spread until we can safely enter the next phase of opening our state for business,” Abbott said in a release.

Earlier this month, he announced the state was moving into its Phase III, meaning most business could operate at up to 50% capacity.

He suspended all elective surgeries in hospitals in four counties that are home to the cities of San Antonio, Dallas, Houston and Austin. The counties have had “significant increases” in Covid-19 hospitalizations, Abbott said.

Any procedure not immediately necessary to correct a serious medical condition or preserve a life will be postponed.

“As we work to contain this virus, I urge all Texans to do their part to help contain the spread by washing their hands regularly, wearing a mask, and practicing social distancing,” Abbott said in a statement.

In California, the budget has gone from a $21 billion surplus to a $54.3 billion deficit in a matter of months, decimated by the economic demands of the pandemic.

Newsom’s proclamation clears the way for the legislature to use $16 billion rainy fund to respond to the pandemic. Expenditures include personal protective equipment, medical equipment, and services to protect vulnerable populations.

The CDC has been looking at antibody tests done across the country to see how many people had past infections that were not diagnosed at the time, said director Dr. Robert Redfield. It is seeing many more cases than have been reported officially.

“A good rough estimate now is 10 to 1,” Redfield told a media briefing.

This is partly because testing had been limited to people who were seriously ill and showing up in hospitals or nursing homes. But now, as more people are being tested, it is becoming clear that a large percentage of people did not have any symptoms, or mild symptoms, Redfield said.

Some states are extending restrictions

Arizona Gov. Doug Ducey said at a press conference he wouldn’t talk much about “gating criteria” for lessening restrictions, saying “Arizona is on pause.”

The state has added about 2,700 new cases per day over the seven days that ended Tuesday. Adjusted for population, that’s about 38 new cases per 100,000 people per day.

“Some in Louisiana may be done with Covid, but I promise you that Covid is not yet done with Louisiana,” Edwards said. “I especially want to call on the young people of our state, those ages 18 to 29, to take this illness seriously.”

“We are where we are,” the governor said at a press conference. “I didn’t say we’re going to go on to the next phase.” He added later: “We never anticipated necessarily doing anything different, in terms of the next phase at this point.”

Cuomo criticized others who “played politics,” opened their economies too early, and “now are causing this nation great havoc.”

Several factors contribute to the rise in cases.

In California, the virus is spreading at private gatherings in homes, more young people are testing positive, and cases among the incarcerated are alarming.

“Going out in public without a mask is like driving drunk,” said Dr. Jonathan Reiner, a cardiologist and professor of medicine at George Washington University. “If you don’t get hurt. You might kill somebody else.”

Florida Gov. Ron DeSantis has attributed the rise to more testing but others say community transmission is playing a key role as the state reopens.

And it’s not accurate to simply say that the increased infections is due to increased testing, said Michael Osterholm, director of the Center for Infectious Disease Research & Policy at the University of Minnesota.

No clear connection to recent protests has been established, experts say.

Concern about cases in the younger population and those without symptoms

Younger people testing positive at a higher rate is a “smoldering fire” that will hit vulnerable populations, said Erin Bromage, a CNN medical analyst and a biology professor at the University of Massachusetts Dartmouth.

Health experts didn’t focus on younger people at the beginning of the pandemic because the priority was the older population and those with underlying health conditions who required hospitalization, Bromage said.

“We’re now seeing what is really happening, which is those 18- to 44-year-olds are being affected at a really high rate. Their social networks, their employment, is allowing them to mix at a higher rate, and we’re seeing the infection rate — especially in Texas, Florida and Arizona — just skyrocketing in that demographic,” Bromage said.

Bromage explained that while younger people with Covid-19 are not “as prone to severe disease as the elderly,” they will still put this population at risk. “That’s when we end up with lots of sickness and lots of disease.”

“We can’t get ahead of the person who doesn’t have symptoms and get them to quarantine,” said Dr. David Persse, the public health authority at the Houston Health Department. “They need to start wearing masks and social distancing all the time.”

Dr. Jeanne Marrazzo, director of infectious diseases at the University of Alabama at Birmingham, said young people and those who either get milder disease from Covid-19 or who are asymptomatic need to know “they could be just as responsible for spreading the virus as someone who’s sneezing it across the room.”

States have responded to the threat of Covid-19 in jails and prisons with “gross negligence,” according to the ACLU and the Prison Policy Initiative. The organizations published a report Thursday on conditions for the incarcerated.

As of June 22, more than 570 incarcerated people in the US and more than 50 corrections officers have died due to Covid-19, the report said. Jails and prisons have become hotspots for new cases.

Numbers in Texas cities are rising

If the current Texas trajectory continues, Houston could be the hardest-hit city in the US with numbers rivaling those in Brazil. Infection numbers are also rising in Dallas, Austin and San Antonio, said Dr. Peter Hotez, dean of the National School of Tropical Medicine at the Baylor College of Medicine.

“The big metro areas seem to be rising very quickly and some of the models are on the verge of being apocalyptic,” Hotez told CNN’s Anderson Cooper.

“I can’t stress enough how concerned I am,” Hotez told CNN’s Jake Tapper.

“We’re not seeing the deaths yet, but that will start,” Hotez said. “Those deaths will start to mount up, I would say, in a couple of weeks.”

Models show that Houston could have a four-fold increase in the number of daily cases by July 4, he said, adding that states need to act to stop community transmission.

“That is really worrisome and as those numbers rise, we’re seeing commensurate increases in the number of hospitalizations and ICU admissions,” he said. “You get to the point where you overwhelm ICUs and that’s when the mortality goes up.”

Hotez is also a professor of pediatrics and molecular virology and microbiology, and is working on a potential Covid-19 vaccine.