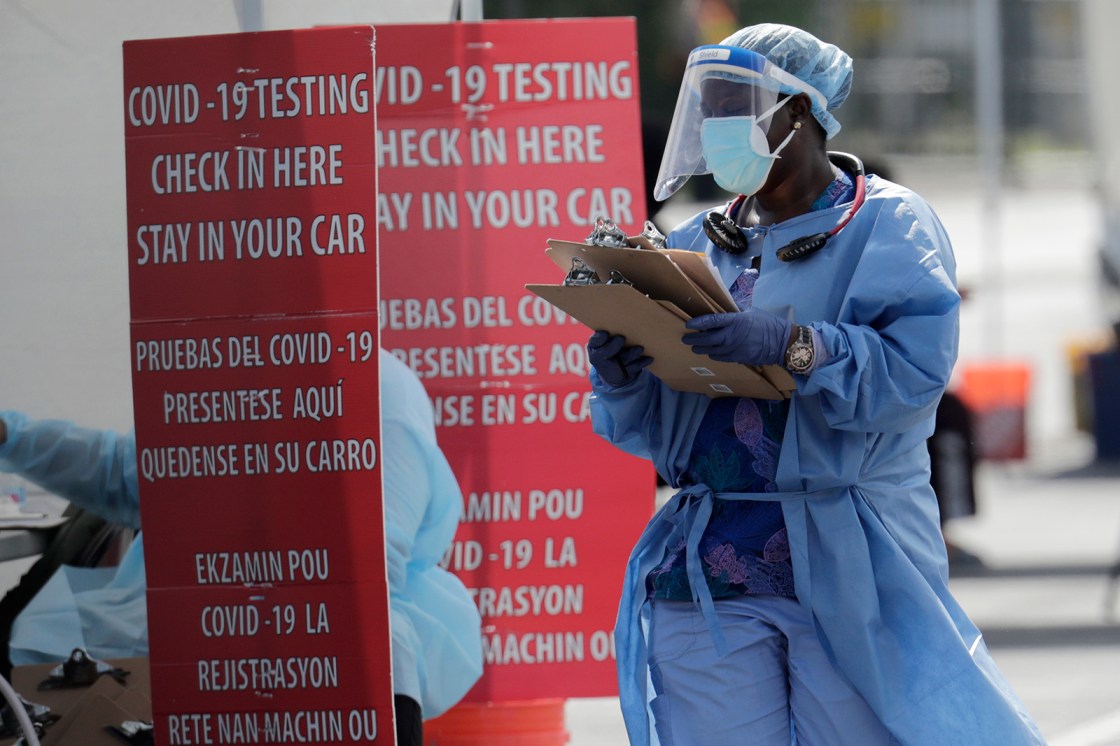 Despite hopes for relief this summer, the United States still is battling the first wave of the Covid-19 pandemic, so much so that across the South and Southwest contact tracing — a key component to combating the virus — is no longer possible, a health expert says.

“The cases are rising so rapidly, that we cannot even do contact tracing anymore. I don’t see how it’s possible to even do that,” Dr. Peter Hotez, dean of tropical medicine at Baylor College of Medicine, told CNN’s Anderson Cooper Monday.

Nearly 3 million confirmed coronavirus cases have been reported in the US and the number of cases has rapidly increased in the past few weeks.

Hospitals in Texas and Florida are flooded with critical Covid-19 patients and some local and state officials have made face coverings mandatory.

Last week, the country averaged just under 50,000 new cases daily — the highest rate recorded, and twice as high as a month ago.

“It’s a false narrative to take comfort in a lower rate of death,” Fauci, the director of the National Institute of Allergy and Infectious Diseases, said during a livestream with Sen. Doug Jones of Alabama. “There’s so many other things that are very dangerous and bad about this virus, don’t get yourself into false complacency.”

More than 131,200 people in the US have died from coronavirus, according to data from Johns Hopkins University.

An influential coronavirus model often cited by the White House increased its projections for US deaths on Tuesday and it’s now forecasting more than 208,000 deaths by November.

But face masks could save more than 40,000 US lives by November if 95% of the population wears a covering in public, according to the Institute for Health Metrics and Evaluation (IHME) at the University of Washington, which built the model.

Nearly 6,000 coronavirus patients are hospitalized in California — the highest number since the pandemic began — and the state is seeing a record number of Covid-19 patients in ICUs, according to data from California Department of Public Health.

California is only one of several states that are reporting record numbers of hospitalizations. Medical facilities in Florida, Texas, Mississippi, Alabama, Georgia, South Carolina and North Carolina are being overrun by the surge of cases.

Florida Gov. Ron DeSantis announced Tuesday that officials are sending 100 nurses and adding nearly 50 beds to Miami’s Jackson Memorial Hospital. The facility has 345 Covid-19 patients with 25% of them in the ICU, the governor said.

In Florida, at least 43 hospitals across 21 counties — including Miami-Dade, Broward, Hillsborough and Orange counties — have hit capacity and show zero ICU beds available, according to data released by the Agency for Health Care Administration (AHCA).

Medical staff there are “putting in anywhere between 16 to 20 hours a day,” Varon told CNN.

Lina Hidalgo, judge of Texas’ Harris County, which includes Houston, is wants a stay-at-home order in her county as coronavirus cases rise. A patchwork method, she said, won’t quell the virus in the long run.

“A long-term solution based on data instead of wishful thinking is what’s going to put our economy in the position to succeed,” Hidalgo told CNN’s Kate Bolduan on Tuesday.

In Texas’ Rio Grande Valley, a hospital in the city of Weslaco set up tent outside to help deal with an influx of Covid-19 patients, CNN affiliate KVEO reported.

The 25-foot tent is meant to help South Texas Health System emergency room doctors treat and additional 20 coronavirus patients, adding to the 14 that the facility could otherwise handle.

“We are trying to reserve out in-house ER for the sicker patients,” hospital director Pablo Laredo told KVEO on Monday.

At least 31 states have showed an upward trend in average new daily cases — an increase of at least 10% — over the last seven days, as of Tuesday morning, according to data from Johns Hopkins University.

One of the main drivers of cases now could be “silent spreaders,” or people who are asymptomatic or presymptomatic, according to a new study.

The report, published in the Proceedings of the National Academy of Sciences, found that asymptomatic or presymptomatic hosts could be responsible for half of cases.

Michigan Gov. Gretchen Whitmer on Tuesday called for a “national mask-up campaign,” saying it is necessary for everyone to wear masks to stem the spread of the coronavirus.

“I think that if everyone endorsed this, it’s a simple, cost-effective thing that we could do to really mitigate spread,” Whitmer told CNN’s “New Day.”

After weeks of health officials encouraging the public to wear face masks, at least 35 states along with Washington DC and Puerto Rico have implemented face covering requirements to help mitigate the virus’ spread.

The US government has announced it’s giving the largest government Covid-19 vaccine contract to date, as a race to find and deliver an effective vaccine continues.

Novavax is the fourth company to receive federal funds to conduct large-scale Phase 3 clinical trials and manufacture its Covid-19 vaccine. Each trial is expected to include 30,000 people.

Novavax’s $1.6 billion will allow the company to test the vaccine and scale up production in advance of its possible approval, with the aim of delivering 100 million doses by February, Stanley Erck, Novavax’s president and CEO, told CNN.