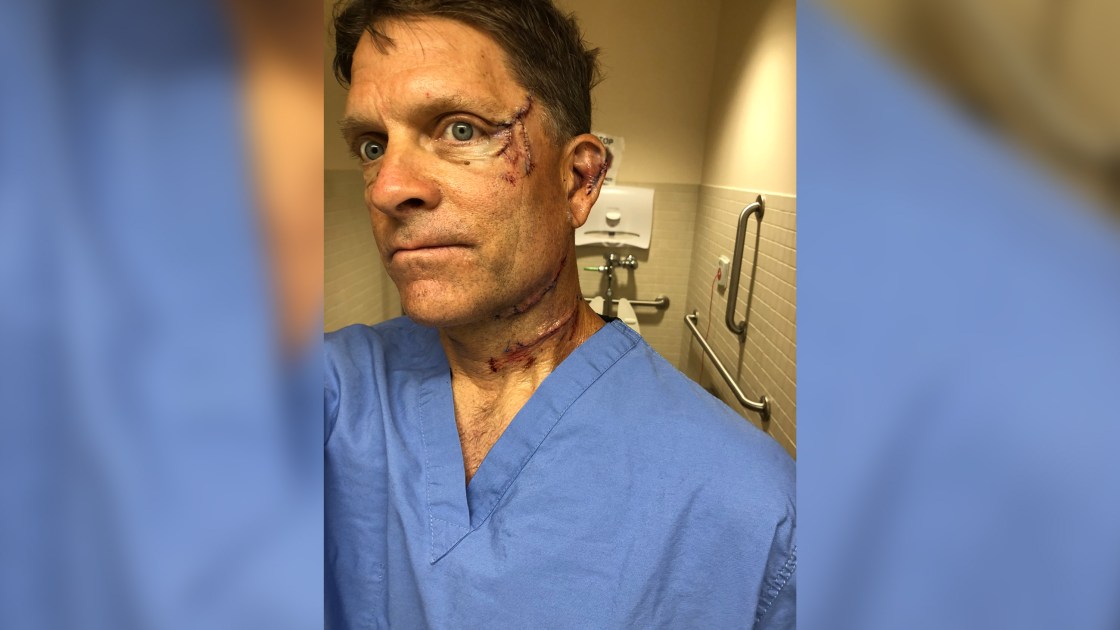 A Colorado man knew something was wrong when he heard a commotion early Friday morning in the Aspen house where he’s staying with his kids.

“I laid in bed thinking, ‘I really hope this isn’t a bear,'” Dave Chernosky told CNN. “I figured it probably was, but I was sure hoping for something else once I got into the kitchen.”

He said the large black bear, estimated at about 400 pounds, was standing at the refrigerator when he walked in the room. The animal had opened drawers and cabinets and thrown stuff around.

He was able to keep the kitchen island between them and then tried to coax the bear into the garage to get it outside.

The plan seemed to work, but Chernosky said the bear got spooked when he hit the garage door opener, and it came back in the house.

Chernosky went to make sure that it didn’t wander down the stairs to where his 12-year-old twins were sleeping. That’s when he encountered the bear face-to-face.

“We looked at each other, and he just smacked me in the side of the head and spun me around and got me again on the back,” Chernosky said. “I literally heard it crack on my head. A bear paw is not soft and cushy.”

He was bleeding heavily from cuts to his forehead and neck, but was able to scramble away and scream at the bear to leave.

“I just knew if he didn’t leave I was in big trouble,” Chernosky said. “But fortunately, he was done at that point and just left.”

Officials with Colorado Parks and Wildlife were able to track down the bear and euthanize it. They’ll test samples from the bear and the house to make sure they got the right animal.

“Based on the direct and clear trail that tracking dogs quickly followed, along with the physical description of the bear from witnesses, we’re certain that we got the offending animal,” said Area Wildlife Manager Matt Yamashita in a statement. “We never like to have to put an animal down but the protection of the public is paramount once a bear begins entering homes and responding aggressively toward people.”

Officials said it matched the description of a bear that had been seen in the neighborhood for several days. It may have been the same bear that’s been reported raiding trash cans in the area and evading capture for the past couple of years.

It’s unclear how the bear got in the house, but Colorado Parks and Wildlife spokesman Randy Hampton told CNN affiliate KMGH that the front door had a lever handle, which are easier for bears to open.

This was the first bear attack in Aspen this year, according to the statement. The three bear attacks in the area in 2019 all occurred outdoors.

Chernosky said he feels lucky as he recovers from his wounds, adding that doctors told him the bear’s claws just missed his eye and his carotid artery.