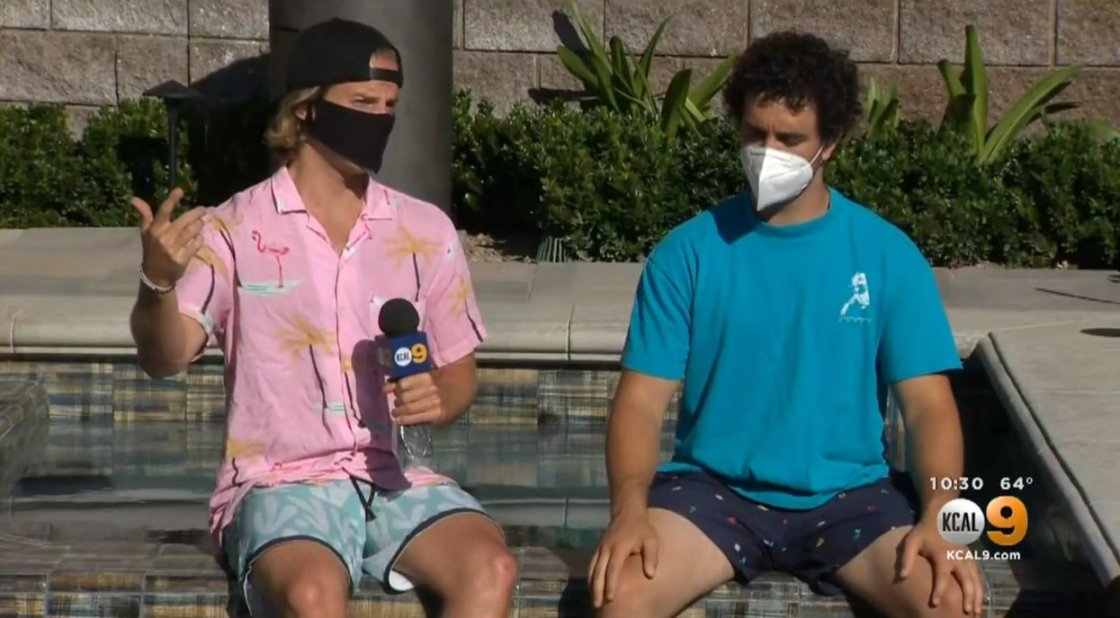 The video titled “Solving the Mask Shortage in Huntington Beach” has been viewed more than 2.3 million times.

Chad Kroeger and JT Parr started out the video saying, “Guys, we have a cure for the mask shortage.” They were holding a big sign that said “Free Masks” and a box of masks as they walked near the beach.

They got turned down by multiple people, who under Orange County guidelines, should be wearing face coverings at all times in public. One man also appeared to want to fight them and they responded, “We’re not trying to fight anyone. We just want to hand out masks.”

“It is interesting how people interpreted it as a personal judgment,” Kroeger said.

Kroeger, who surfs and eats in Huntington Beach frequently, said he noticed many people weren’t wearing face coverings and thought one way to approach the issue would be to hand them out at no cost since his friend had a free supply.

Kroeger and Parr are behind the comedy YouTube channel, Chad Goes Deep, that posted the mask video. They admit being initially doubtful about the effectiveness of masks but took it more seriously after a friend who refused to wear one tested positive for coronavirus.

“At this point, we don’t want that to happen to anyone else,” Kroeger said.

The pair said as soon as they get an additional supply of masks, they’re going to try to give them away in San Clemente.

Several videos have shown confrontations over face masks in various parts of the country. In Los Angeles, a maskless Trader Joe’s shopper called people telling her to wear a mask “Democratic pigs.” A security guard who authorities say shot a man outside a Gardena store — after they fought over him not wearing a mask — was charged with murder. Elsewhere in Florida, a man was seen on video shouting in the store after reportedly being asked why he was not wearing a face covering, as required at all Costco locations.

The Centers for Disease Control recommends wearing clean cloth face coverings in public settings where other physical distancing measures are difficult to maintain. Many counties, including Los Angeles County and Orange County, have also issued their own guidelines requiring the use of masks in public.

The CDC on Tuesday affirmed that the latest research shows face coverings as a tool that can be used to help prevent the spread of coronavirus.

“We are not defenseless against COVID-19,” said CDC Director Dr. Robert R. Redfield. “Cloth face coverings are one of the most powerful weapons we have to slow and stop the spread of the virus – particularly when used universally within a community setting. All Americans have a responsibility to protect themselves, their families, and their communities.”