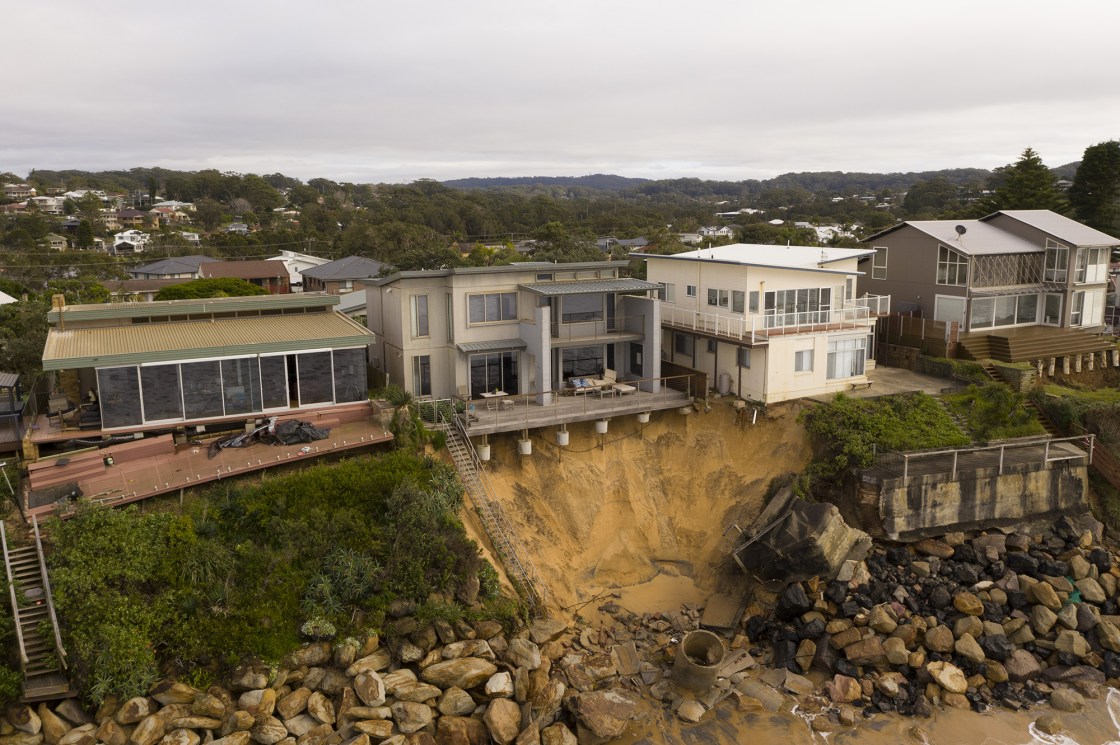 In a coastal neighborhood in Australia’s New South Wales state, luxury beachfront homes are in danger of collapsing into the ocean.

Residents in more than 40 houses along Wamberal Beach, located in the central coast north of Sydney, have had to evacuate over the past few days as coastal erosion threatened to damage or destroy the homes.

The multi-million dollar properties sit on a cliff above the water, but days of strong swells have eaten away at the land, causing the cliff face to crumble. Videos from last Friday show white waves surging up the cliff, almost reaching the houses, leaving broken staircases and debris in the sand as the tide pulls away.

This weekend, some homes saw their backyards swallowed by water, or front porches and balconies partially collapsed. Authorities declared dozens of homes “at-risk,” and residents were given two hours to pack their belongings and evacuate during low tide, according to CNN affiliate Nine News.

It’s not clear when they’ll be allowed back into their homes; authorities have shut off power, gas, and water to the most high-risk properties and fenced off the danger zone, as the Central Coast Council asks members of the community to stay away from the area.

In the meantime, local officials and welfare agencies are working to provide crisis accommodation for the displaced residents.

But many frustrated residents say it’s too little too late, and accused the local council of not taking sufficient action to address long-standing concerns. For years, they’ve warned against coastal erosion accelerated by climate change, and lobbied for a seawall — especially after destructive storms in 2016.

In a press release on Monday, the council “acknowledged the severe weather had caused great distress to residents.” If residents wanted to take “coastal engineer-designed action” to protect their homes in the coming weeks, the council wouldn’t take any regulatory action, it said.

“This is a not a time for blaming each other — it is a time for us to work together to deliver long-term solutions for the Coast, including for those who have been so terribly impacted by this event,” said Mayor Lisa Matthews in the release.

But some residents took this as further evidence of authorities absolving themselves of responsibility.

“We can’t protect our own homes at our cost — the council doesn’t want to do anything,” said Chris Rogers, a resident who had to flee his home, according to Nine News. “We’ve got no trust in them. It’s pretty hard to trust someone when for over a decade they’ve been letting people down.”

Severe storms have devastated Wamberal Beach and the surrounding Central Coast multiple times since the 1970s, causing severe erosion and damage to residential properties. However, it wasn’t until last year that the council began preliminary investigations and designs for a seawall.

Coastal erosion is threatening other communities around the country, too; nearly 39,000 buildings around the Australian coast are at risk of accelerated erosion due to the effects of climate change, according to the government’s geoscience agency.

Normally, beaches are dynamic environments. Shorelines are supposed to naturally shift and change with the tide and respond to changes in sea level. But when humans develop near the water, we further disrupt a beach’s ability to move and halt the natural processes that allow sand to replenish on its own.

Worldwide, as many as half of all sandy beaches could disappear by the end of the century, according to the March study. Even by 2050 some coastlines could be unrecognizable from what we see today, with 14% to 15% facing severe erosion.

Places like Miami Beach in the United States are trucking in thousands of tons of sand to patch up badly eroded shorelines, while others have built massive seawalls and breakwaters in an attempt to hold precious sand in place.

But the financial and environmental costs of these projects are enormous, and scientists say rising seas and more powerful storms, supercharged by a warmer climate, will make this a losing battle.

Other countries that could see huge lengths of shoreline eroded are Chile, China, Russia, Mexico and Argentina.