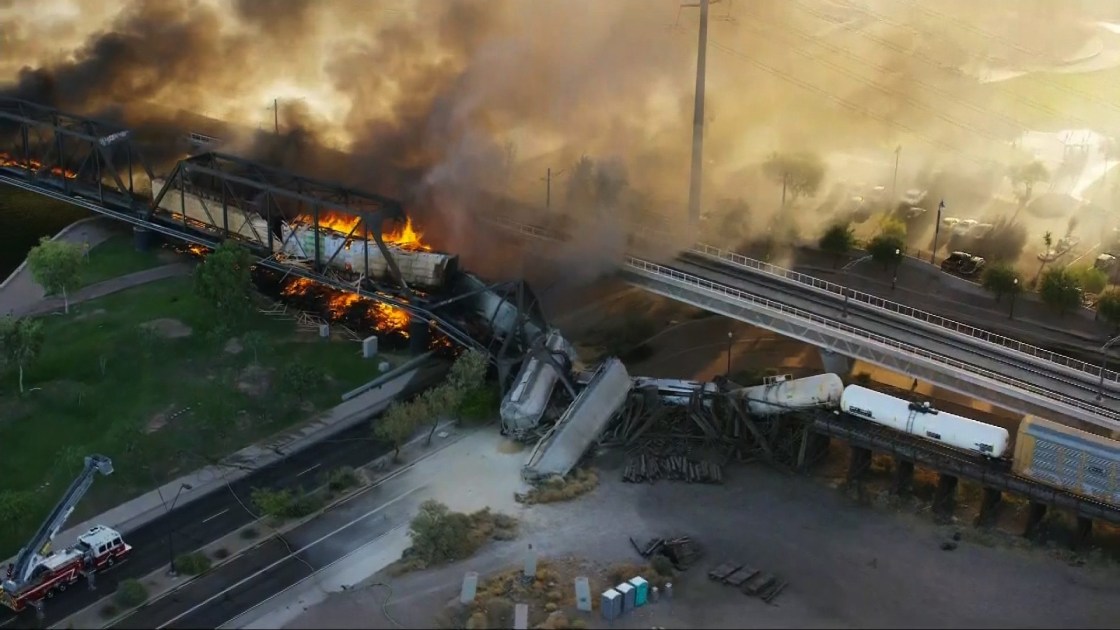 One person was treated for smoke inhalation after a Union Pacific train derailed and caught fire on a bridge over Tempe Town Lake in Arizona, officials said Wednesday.

Plumes of black smoke could be seen rising into the sky beneath a trail of flames on video and images from the site of the derailment, where part of the bridge collapsed.

The train was hauling hazardous material, according to the Tempe Fire Department.

Tempe Police Department Police Chief Sylvia Moir urged residents via Twitter to stay away from the scene, which she described as very dangerous.

“There’s fire pouring into the lake from the middle of the bridge,” Camille Kimball, who was riding her bike under the structure, told CNN affiliate KTVK/KPHO. “It looks like a scene from hell, truly.”

Eight to ten train cars were on fire, according to McMahan.

The south side of the bridge collapsed, sending rail cars into an empty park below, the statement said. The bridge had its annual inspection on July 9.

One person was treated for smoke inhalation, McMahan said. The train crew was not injured.

Three tank cars were on the ground under the bridge, the spokesman said. Two contained cyclohexanone, a flammable and colorless oily liquid used to make nylon and as a solvent. The other carried a rubber material.

McMahan said the tank cars were not reported leaking, and not involved in the fire.

Fire department spokesman Brandon Siebert said officials were “erring on the side of caution” and keeping firefighters and bystanders “as far away as possible” until they know more about the hazardous material on the train.

The operator is safe and assisting hazmat technicians, according to Siebert.

The cause of the derailment is under investigation.

“It is possible the derailment led to the partial bridge collapse but don’t know that for sure at this time,” Siebert said.

Nearly 100 firefighters from Phoenix, Tempe, Chandler, Mesa and Scottsdale responded to the scene, according to Siebert.