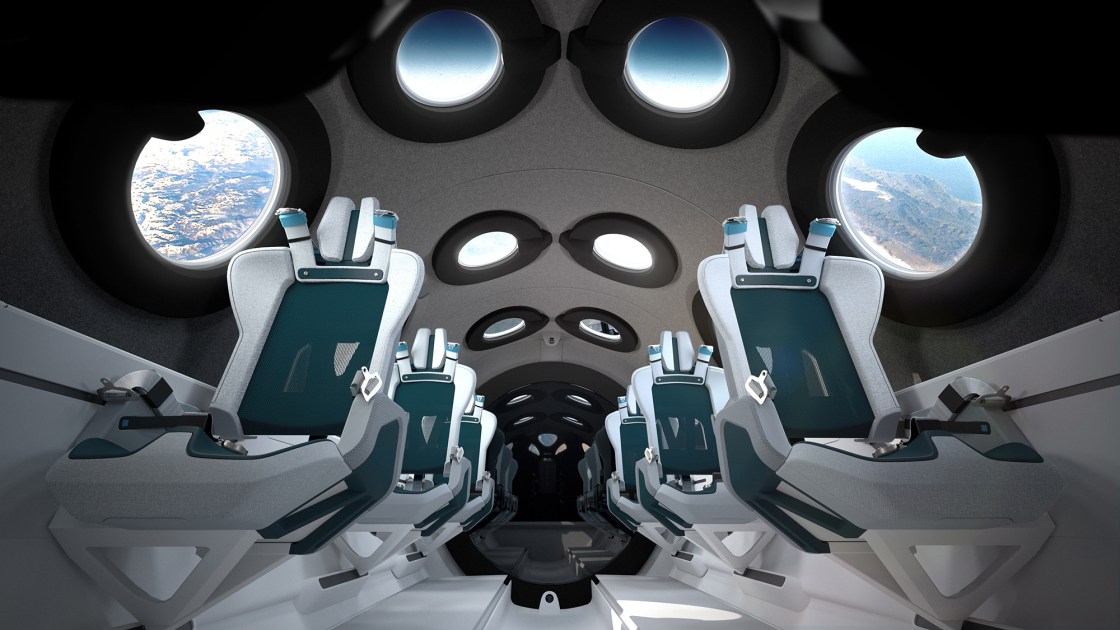 When Virgin Galactic’s tourism customers take their quarter-million dollar ride to the edge of space, they’ll strap themselves into custom-made reclining seats and blast into the upper atmosphere before spending a few minutes floating in microgravity — all while an on-board camera system captures their next social media posts.

Virgin Galactic hosted a live web event on Tuesday to debut the interior of SpaceShipTwo, which has been in development for more than 15 years and may now be within months of flying Virgin Galactic’s first group of wealthy thrill seekers, according to the company. But the company still has several test flights and regulatory approval to gain before it will reach that milestone, executives said Wednesday.

SpaceShipTwo’s mostly white interior will be empty except for a small two-pilot cockpit, up to six passenger seats, an array of windows, and a tinted mirror meant to allow passengers to view themselves as they float out of their seats in microgravity. A network of 16 high-definition cameras — tucked into the cabin walls, in the cockpit and on the exterior of the vehicle — will record the ride, aiming to capture “everything from the first Instagram posts, to a beautifully edited and historically significant personal movie,” according to a press release.

Virgin Galactic said the seats will be designed specifically for each passenger, a feature included in the cost of a $250,000-plus Virgin Galactic ticket. Retractable harnesses are meant to make the vehicle accessible to “anybody, whether you’re 80 years old or, you know, 20 years old and at the top of your health,” Whitesides said.

The company, known for putting on lavish events for customers, also sent Oculus headsets to a group of reporters and some customers to provide virtual walk-throughs of the SpaceShipTwo cabin, a spokesperson said in an email. (Reporters who received the headsets will return them to Virgin Galactic.)

It’s not clear when the company’s first tourism flight will take off. And the Covid-19 pandemic could create more delays for Virgin Galactic, which has endured numerous schedule slips and setbacks, including a fatal accident during a 2014 flight test, since its founding by British entrepreneur Richard Branson in 2004.

“I think we’re doing as good a job as we can in this challenging time for all of us,” Whitesides said of the pandemic.

He added that Virgin Galactic employees take Covid-19 tests every two weeks and keep their distance while at work. (The government deemed the commercial space industry essential in March, allowing Virgin Galactic to continue operating.)

The company also needs final approval from federal regulators before it can set a date for its first commercial flight. Whitesides told reporters Tuesday that Virgin Galactic is looking to conduct “one or two more [test] flights” in the coming months, building on two prior test flights that reached the edge of space carried out in December 2018 and February 2019. Then, in a “final phase” of testing, the company will conduct at least one test mission with four “test passengers” on board with the pilots, Whitesides said.

The company is now hoping to drum up excitement among potential customers and the roughly 600 customers who have already purchased tickets — some of whom have waited years for SpaceShipTwo to be ready for commercial operations. Virgin Galactic, which debuted on the stock market in October 2019, is also preparing to sell a new batch of tickets that the company has said will cost more than $250,000.

Whitesides said an “incredible amount of work” went into designing SpaceShipTwo’s interior, with consideration for every detail from the “mood lighting” to the fabric on the seat backs.

The custom seats will have patches of a woven material with “celestial” blues and and teals that pay homage to the Earth’s ocean, according to Virgin Galactic. Some hardware will also be a golden metallic to resemble the New Mexico desert, which is home to the spaceport where Virgin Galactic’s customers will gather before takeoff.

Each of the 12 windows in the passenger area of the plane will also be circled with a halo of light that will glow bright red during the minute-long engine burn. At the peak of its flight, while SpaceShipTwo is weightless, the lights will cut out and the cabin will be illuminated only by sunshine reflected off the Earth. The windows will offer an expansive view of the Earth’s curved horizon and a glimpse into the blackness of the cosmos, the company says.

“Everything’s made [for] when that pinnacle moment happens,” said Michael Colglazier, a former Disney executive who was named Virgin Galactic’s CEO earlier this month.