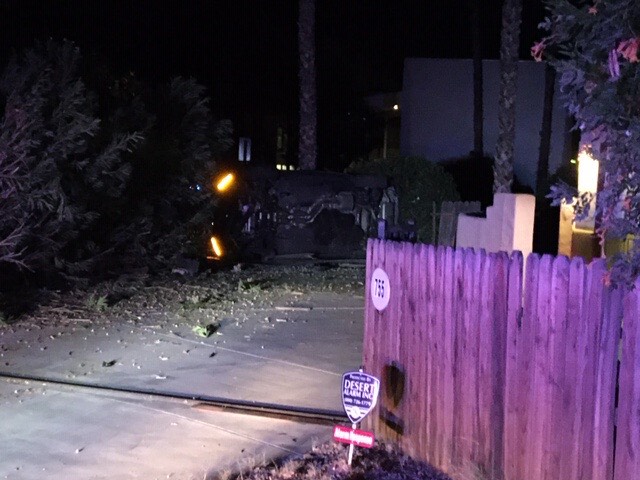 Violent night across the valley, police respond to multiple shootings and stolen vehicle

Ryan Leaderman was watching TV in his Palm Springs home Wednesday night when he heard a strange noise.

“It was just a really loud impact and shortly thereafter we saw the lights from the sirens,” said Leaderman.

The driver of a stolen vehicle led police down Desert Way in Palm Springs before the car crashed through both the front and back gate, flipping onto the driveway.

“We went out to see what was going on and the cops told us to just get inside the house and we had no information for quite a while,” said Leaderman.

Police say the driver ran from the vehicle, leading to a pursuit by helicopter.

Officers were unable to locate the suspect and are asking anyone with information to come forward.

Unfortunately, this incident was just the first of several overnight crimes across the valley.

A few hours later, the Riverside County Sheriff’s department responded to a report of multiple shots fired in Coachella.

“The victims reported that, as they rode their bicycles on Calle Camacho past a white Sedan, a male exited the vehicle and began to fire at them multiple times,” said Lt. Martinez.

No injuries were reported, and deputies were able to locate the suspect’s vehicle, and arrested 34-year-old Eduardo Gonzalez for assault with a deadly weapon.

“This morning was very unique we have not something like this in Coachella in some time,” said Lt. Martinez.

The sheriffs department also responded to a shooting in Rancho Mirage Thursday morning.

They say an unknown suspect shot a man while driving near Calle Manzanita.

The victim is expected to be okay, and police are still searching for clues about the shooter.

However, that wasn’t the end of the list of crimes for Thursday morning.

They say that investigation is ongoing.