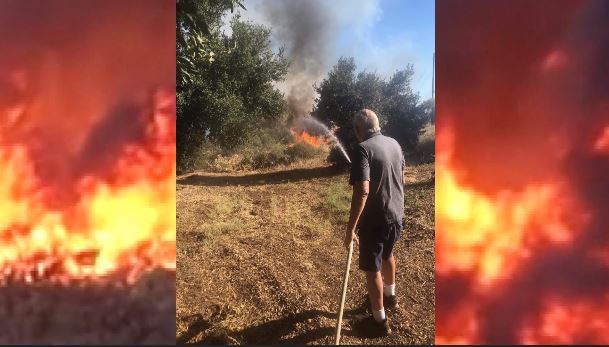 A hose in hand and a fighting attitude. That was 76-year-old Roy Watkins when flames started knocking on his door Friday night.

“You’re trying to save your property so anything goes through your mind,” Watkins said. “Just gotta go out there and do it.”

“My parents, they don’t quit, they don’t know how to do it,” Harmann said. “I mean, he had chemo that morning.”

Watkins, a Vietnam veteran, has seen a lot in his lifetime but the views from his backyard this weekend are high on the list.

“The helicopters bring back a lot of memories,” Watkins said with tears welling up in his eyes. “Anyway, those guys really know what they were doing.”

Watkins lives on Apple Tree Lane, off Oak Glen Road, the spot where several small fires broke out before they conjoined to make what’s being called the Apple Fire.

On his property, you can see the exact location where the first fire broke out. The wind pushed the flames up and around the corner. The fire has left behind a charred mess of debris and a community that’s just happy to still be standing.

“Looking out at your backyard, what’s going through your mind now?” NBC Palm Springs asked.

“Savior, someone was looking out for us,” Watkins said with a sigh of relief.

Every house in the area was spared from the flames of the Apple Fire. Harmann remembered one house in particular that was close to catching fire.

“We were watching the fire burn up the hill to this one house and at one point we couldn’t see the house or the flames or the smoke and we were praying fierce for those folks up there,” he said. “When everything dissipated, there was one crew up there still with their hoses. The house was standing, the crews were still there.”

“Those first responders, I mean, they saved that house.”

Watkins said he is also grateful for the first responders so he didn’t have to fight this battle alone.

“I’m glad they were here because I wouldn’t have put that fire out,” he said with a smile. 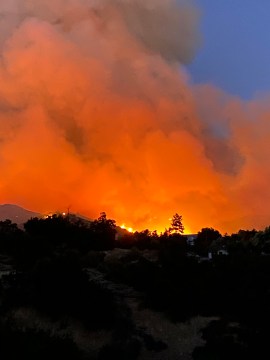 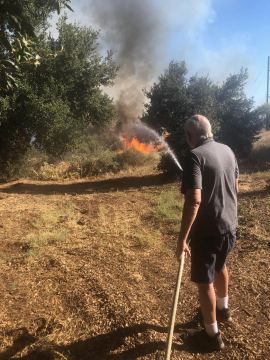