A monstrous smoke column that some say resembled a bomb blast erupted Friday afternoon from the Apple fire, now burning for an eighth day near Banning.

Though in an early morning briefing fire officials expressed optimism, reporting 30% containment and 29,267 acres burned, it was evident by early Friday afternoon that the fire was still far from containment or control and in fact was burning vigorously on several fronts.

Calfire tells NBC Palm Springs that the massive plume of smoke was the result of back burning operations on the eastern flank of the fire.  Firefighters ignited forest land in an effort to create a barrier to prevent flames from the main fire from advancing.

By 5:00PM Friday, much of that large plume had dissipated, though active flames could still be spotted on the ridge line to the east of Morongo Casino. 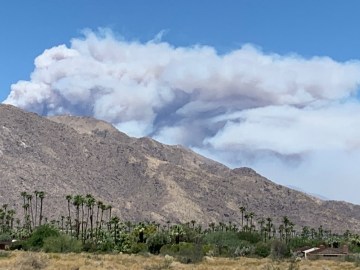 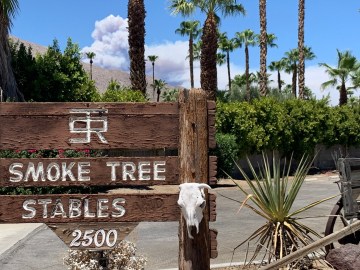 Residents in several communities including Pioneertown and Morongo Valley have been told to prepare to evacuate as the flames move within several miles of both communities. An Evacuation Warning is in effect for the area east of Potrero Road, west to Highway 62 and north of Interstate 10.

Evacuation orders have been lifted in other areas east of Oak Glen Road, including Potato Canyon and Pine Bench north of the Riverside/San Bernardino county line.

Friday morning, Calfire reported containment lines in the Oak Glen area will be complete today. Good progress has been made on Yucaipa Ridge as well reducing the threat to Forest Falls. As threats are reduced and containment line has been completed, firefighting resources will shift to areas of greater threat as needed.

Initially, winds had been favorable and the operation has been successful, however by Friday afternoon winds again increased slightly to about 5 to 10 miles per hour, but were gusting up to 40 miles per hour. Humidity remains extremely low at 5%. Temperatures cooled somewhat from earlier in the week but are still in the upper 90s near the fire lines.

At least four structures have been lost so far, and one injury reported.

Smoke is traveling towards Morongo Valley and will remain in the area until late evening. People with health conditions sensitive to smoke should reduce prolonged or heavy outdoor exercise in this area today.

At 6:00 Friday evening, the Apple Fire Unified Command will host a community meeting at the Morongo Valley Community Center, 11165 Vale Dr., Morongo Valley, CA to update the public on the latest fire behavior, suppression tactics and possible evacuations and closures.

Members of the Incident Management Team will present a short briefing regarding the incident and will be available to answer questions.

By Friday afternoon, more than 2600 firefighters and support staff had been dispatched to the Apple Fire. They are hoping to be able to contain the blaze by Monday, August 17.