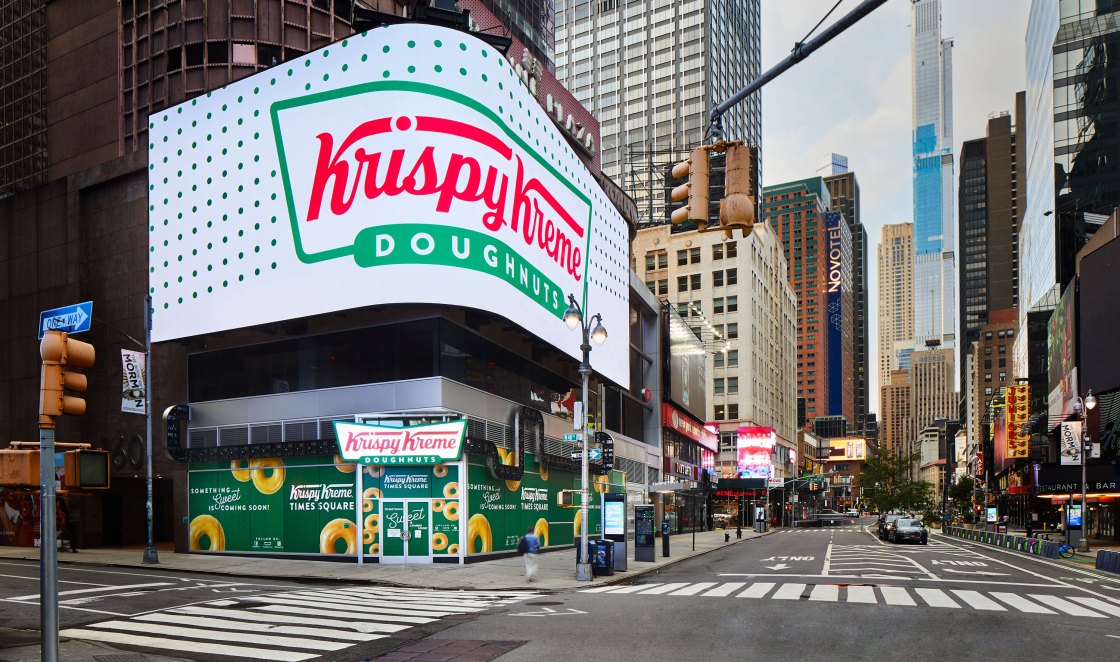 Krispy Kreme is finally about to turn on the world’s largest Hot Light at its new Times Square location. But will anyone see it?

That’s a dilemma the beloved doughnut chain probably didn’t expect to deal with when it announced its new flagship location in June 2019. But in the year since, the world has drastically changed. The coronavirus pandemic has torpedoed foot traffic in the once-bustling tourist magnet and has upended people’s relationship with fast food.

Krispy Kreme CEO Mike Tattersfield, isn’t overly worried. Instead he sees the flagship store, opening September 15, as just one part of the brand’s growing “doughnut ecosystem” in the city.

“We were thinking about how to manage a mile-long line to enter, but we won’t be facing that today,” he admitted in an interview with CNN Business. “It’s still resilient to unlock new channels of growth,” he said, including delivery that it launched nationwide in late February.

The 4,500-square-foot tourist attraction has a glaze waterfall, a 24-hour street-side pickup window, exclusive merchandise and a doughnut-making theater that produces 4,560 doughnuts an hour. Notably, the stadium-style seating shaped as a doughnut box (seen below) might be blocked off or modified because of the city’s restrictions on indoor dining.

Tattersfield said it’s controlling capacity for social distancing with online reservations to enter the store if it becomes too crowded. Employees will also wear masks and have daily temperature checks. The September opening is more than four months after an originally scheduled May launch date, which was scuttled because of the virus.

The number of average daily visitors to the 10-block Times Square area is increasing slowly from its April low, when it declined 91% compared to the same month a year ago, according to the Times Square Alliance. In July, the visitor count was down 83% compared to 2019.

Perhaps more concerning, at the intersection where Krispy Kreme is located — 48th St. and Broadway — visitor count was down 90% year-over-year for July, showing little improvement from April when it was down 96%.

With numbers like that, Neil Saunders, managing director at advisory firm GlobalData Retail, doesn’t predict a sweet future — at least in the near term.

“Under normal circumstances, a Times Square store would be a magnet for customers, especially tourists,” he told CNN Business. “But these are not normal times: Foot traffic has been decimated, tourism has dried up and both of those things mean that stores will be operating well below their potential.”

He added that a “case could be made” that the location could eventually become a standout for Krispy Kreme. “But there is still a huge question mark over if and when things will get back to normal,” Saunders said.

Tattersfield said stats like that mean it won’t meet sales projections it had originally planned, but it doesn’t mean Krispy Kreme is giving up on the location that was three years in the making.

“We anticipate this will be a pretty long build for us, with more than one-year plus to get to volumes that we anticipated,” he said. “It’s an opportunity for us to grow and look at our other channels that want access, but don’t have enough access in New York City.”

In January, Krispy Kreme announced it was expanding in New York City, a Dunkin’ stronghold, and having 8 locations open by year’s end. So far, the five that are open are “doing great,” Tattersfield said — even the newly remodeled location in Penn Station despite the decline in passengers.

JAB Holdings bought Krispy Kreme in 2016 and privatized it. Since then, the chain has been growing steadily. Krispy Kreme has around 400 locations in the United States, with another 20 opening by the end of 2020. In total, there are 1,400 shops in 33 countries.

Tattersfield believes the chain has an opportunity to succeed, especially with its rivals retreating. Dunkin’ is closing 800 locations in the United States by the end of the year and McDonald’s, which recently shut the doors of one of its Times Square restaurants, is having trouble in the mornings too.

Like others, the company has noticed a drop-off in traffic in the early mornings with people coming by later in the day. Promotions, such as free doughnuts to healthcare workers, have also buoyed sales. Krispy Kreme is also expanding delivery, which accounts for about 10% of its business, and formed a partnership with Walmart to sell packaged bites and mini crullers.

Tattersfield described Krispy Kreme as a “branded doughnut company” rather than just being focused on its restaurants. “It’s about creating the right access to doughnuts, whether it’s hot or fresh and doing that through delivery, wholesale or extended shelf life products.”