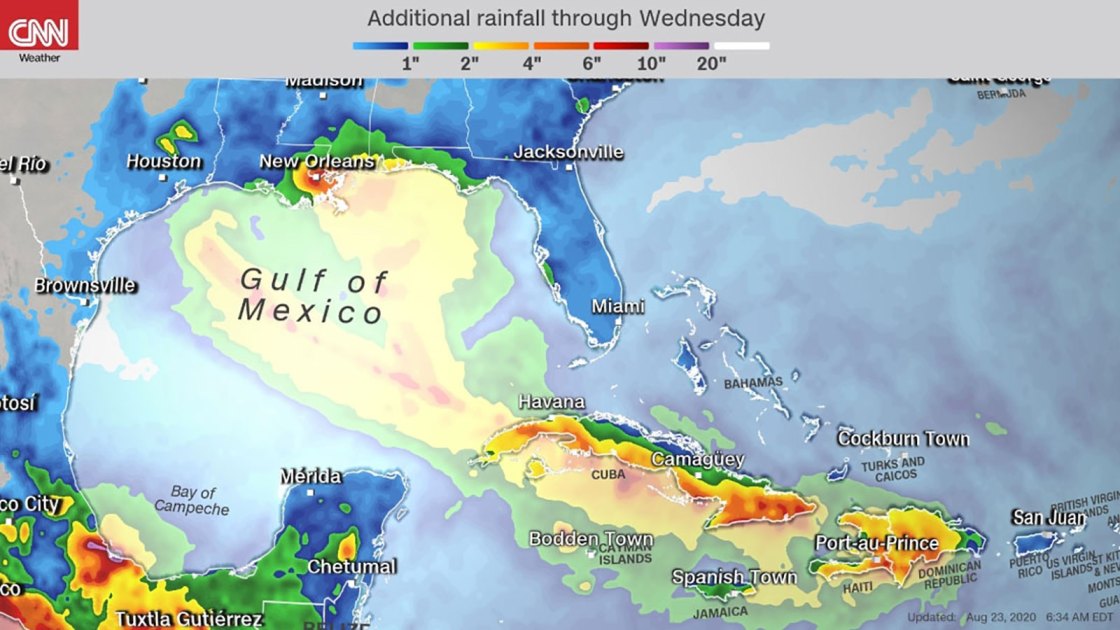 The Gulf Coast will get walloped by two hurricanes this week, bringing torrential rain, fierce winds and ferocious storm surges.

First up: Marco, which strengthened from a tropical storm to a Category 1 hurricane Sunday. Marco is expected to make landfall on the Louisiana coast Monday.

Then there’s Tropical Storm Laura, which is also expected to strengthen to a hurricane before it makes landfall on the US mainland late Wednesday or early Thursday. Laura will also make landfall on or near the Louisiana coast.

“The unprecedented kind of thing here is that it’s the same state within 48 hours of each other,” National Weather Service meteorologist Benjamin Schott said.

“In modern meteorological history … there’s never been anything like this before where you could have possibly two hurricanes hitting within miles of each other over a 48 hour period.”

And the one-two punch from Marco and Laura means “there may not be much of a window” for rescuers or power restoration crews to respond to victims between the two storms, Louisiana Gov. John Bel Edwards said.

The National Hurricane Center warned of “life-threatening storm surge and hurricane-force winds” Monday in parts of the Gulf Coast.

“A storm surge warning means there is a danger of life-threatening inundation, from rising water moving inland from the coastline, during the next 36 hours,” the hurricane center said.

Marco is expected to bring a storm surge height of 4 to 6 feet for Biloxi, Mississippi, and Grand Isle, Louisiana, Chinchar said.

Bowl-shaped New Orleans is at risk

“Since New Orleans is not actually on the coast, it will be more indirectly impacted via Lake Pontchartrain, which is expected to have surge heights of 2 to 4 feet,” Chinchar said.

That, combined with 4 to 6 inches of rain, means New Orleans could flood Monday.

“New Orleans is especially at risk because it is essentially shaped like a bowl,” Chinchar said.

“Thanks to the drainage system they have set up, the city can act like a colander, allowing water to flow out,” she said. “But when it rains a lot in a short period of time the drainage system can become overwhelmed, and that colander acts more like a bowl and floods the city.”

Stacie Osborn told CNN it took her 30 minutes to get through the checkout line at a market in New Orleans.

“I stocked up on enough food for the week, extra water and gassed up my car just in case — the usual,” she said.

Meantime, John Snow in Baton Rouge said the line at his local Costco was wrapped around the building just ten minutes after opening.

“It ended up taking about 20 to 25 minutes to get into the store, which wasn’t ideal with the Louisiana heat and masks on,” he said, “but it wasn’t terrible.”

Snow said he was stocking up on the essentials and getting gas. “As always, we hope for the best but plan for the worst.”

Marco is expected to bring “a tremendous amount of rain, not just to Louisiana, but areas of Mississippi, Alabama and even Florida,” Chinchar said.

“Then you have Laura making its way into the Gulf, shortly after Marco makes landfall,” she said.

“Even on Monday and Tuesday, Key West, Miami — you’re going to get some of those outer bands from Laura producing very heavy rain and very gusty winds.”

Laura was thrashing the Dominican Republic on Sunday, “dumping a tremendous amount of rain there,” Chinchar said.

About 500,000 people lost electricity in the cities of Santo Domingo and San Cristobal after they were pummeled by Tropical Storm Laura, according to Edesur, a Dominican electric distributor.

By Sunday afternoon, tropical storm warnings were in effect for the entire coast of Haiti, the southeastern Bahamas, the Turks and Caicos Islands and parts of Cuba, according to the NHC.

Tropical storm watches were in effect for the central Bahamas and the Florida Keys from Ocean Reef to Key West and the Dry Tortugas.

By the time Laura reaches the US coast, it’s expected to be a Category 2 hurricane — whipping maximum sustained winds of at least 96 mph.

Laura is expected to impact many of the same areas that Marco will hit.