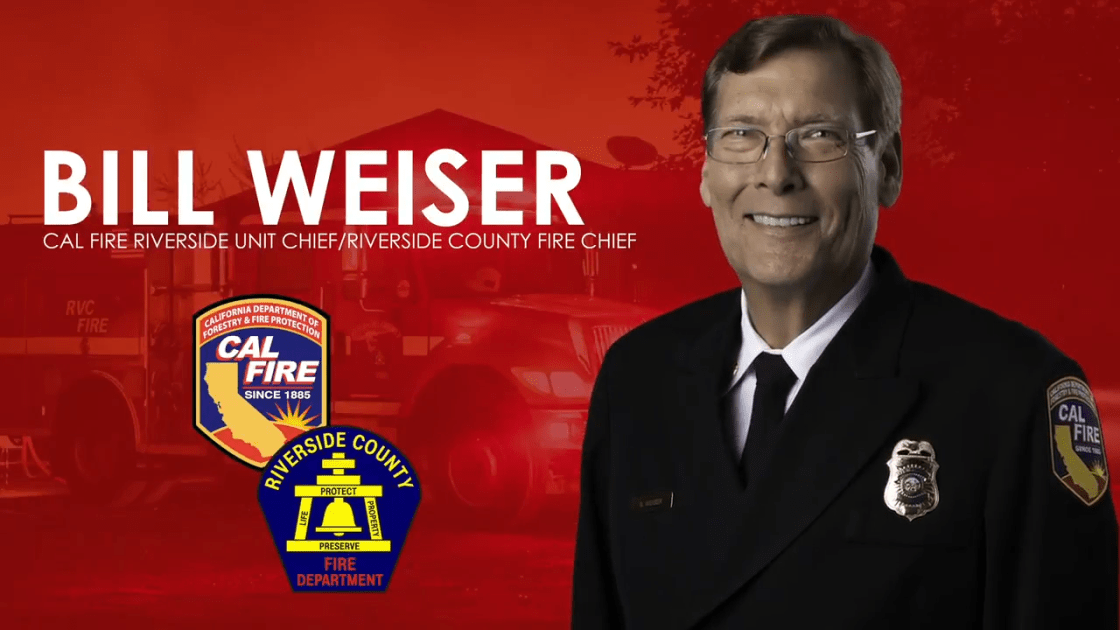 Cal Fire Riverside County Fire Department has a new chief at the helm: Chief Bill Weiser. As chief he will lead over 1,300 employees to protect over three million citizens, in the second largest geographical area in the state with a budget of more than $350 million.

“It’s an honor to serve all of these people but it is a big weight, and it’s something that I do take very seriously,” says Weiser.

Being the Cal Fire Riverside County Fire Department is really two jobs in one. He’s  one of 21 unit chiefs for the state, plus the county chief in charge of 21 contract cities and unincorporated areas.

“It’s an integral, cooperative, regional fire protection, it’s probably one of the greatest plans in the nation for firefighting, how we take different communities’ resource needs and put them together and to make one really strong fire department, with state, county and city assets,” he says.

He’s been in the fire service for nearly four decades, all of them with Cal Fire. Weiser started out as a seasonal firefighter and rose through the ranks to become chief.

“It’s become more challenging over the time,” adding that their service has expanded from one man engine companies to three and went on over 170,000 calls last year.

Another challenge: the pandemic. He says while firefighters have gotten sick, they’ve been able to maintain staffing.

“We recognized the threat really early, since February and started working on a pandemic plan for our employees,” adding it’s changed the way they do their job in ways they didn’t anticipate, “it’s been tougher for our men and that have to deal with COVID and wear a mask and shield and other things because we don’t have that genuine human contact with people that call us and need us.”

And this fire season has also been a challenge.

They fought the Apple Fire that burned over 33,000 acres and right now they have over 200 fire personnel fighting the massive wildfires in Northern California.

He says they already have a plan in place for peak fire season, “We will use our compacts and agreements that we have throughout the state to be able to bring those surge resources to us like we’re providing right now when we really get our fire season, our Santa Anas normally happen in October.”

But no matter the challenge, he says he and his department are ready to give their best to people who call them for help on their worst day, “When California citizens need us, we serve, that’s what we do.”