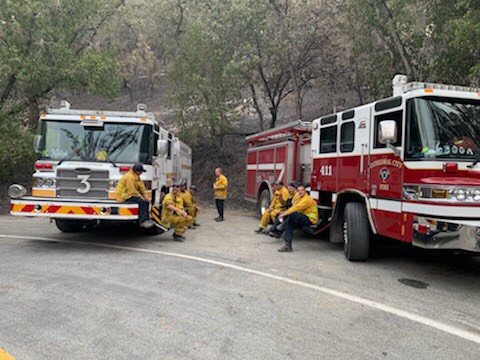 Among the more than 12 thousand firefighters waging war against the massive fires burning out of control in Northern California are some of Palm Springs bravest. They’re assigned to the SCU Lightning Complex Fire. It’s burning across five counties, scorched over 360,000 acres, and now the second largest in the state’s history.

He’s been fighting fires for nearly 30 years, but says being a leader on this fire carries extra weight, “The first two days we were on the line almost solid for 48 hours and I don’t think I could shut my eyes there was too much responsibility to make sure everybody was okay.”

He says everywhere they walk they’re knee deep in dry grasses and that’s what’s making this fire tough to control, “A fast moving, fuel driven fire, that just does not want to stop … the typical cliches about sounds like a train coming, it’s all true and it’s scary sometimes.”

“We’re driving around in these big city fire engines and back on these ranch roads and sometimes we don’t exactly fit so we’re using chainsaws to cut the trees to cut the trees,” says b.c..

In the eight days they’ve been there, they’ve done and seen it all from structure protection, to avoiding snakes and fighting fire with fire.

“We found explosives at one and had to tag that off, and I mean we’ve had everything so far,” he says.

The b.c. says getting to meet the people they’ve helped is rewarding, “The homeowners were just so relieved that somebody was there.”

They’ll be there as long as they’re needed but can’t wait to get home to their families.

“I had just taken apart my son’s scooter and we repainted it and then I left on this fire …  so I feel so bad for that so when I get home, I‘m going to get that squared away,” says the battalion chief.