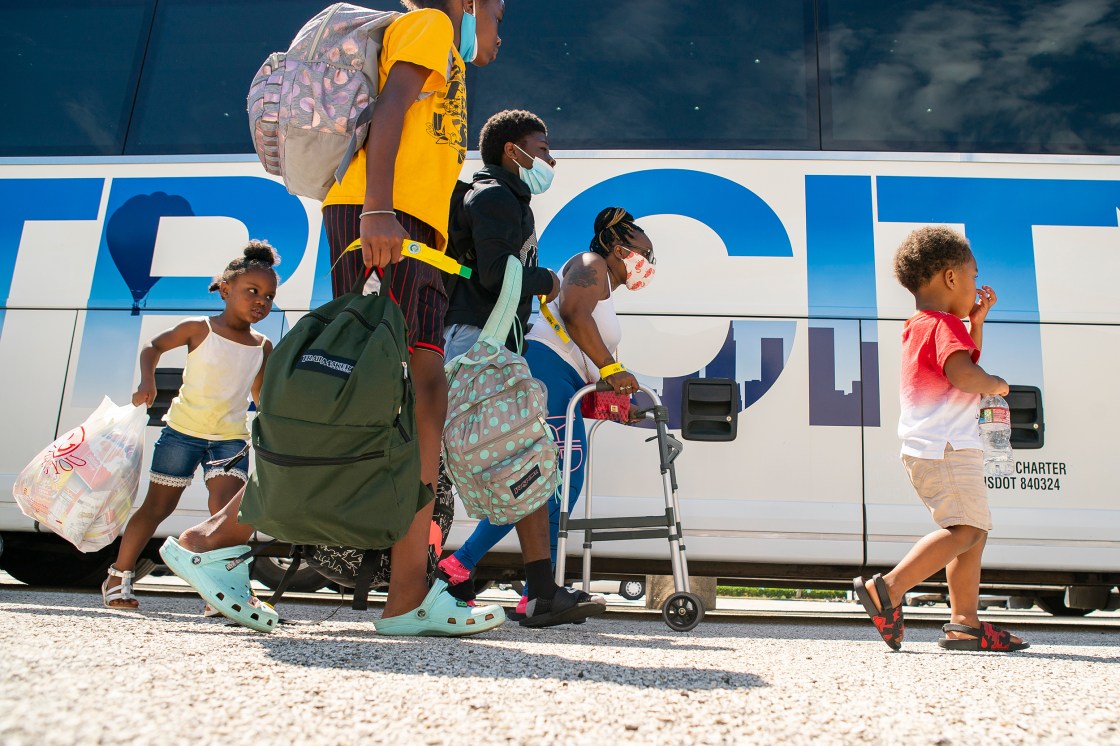 Hurricane Laura has reached extremely dangerous Category 4 strength ahead of anticpated landfall near the Louisiana-Texas state line, and is expected to hit parts of the coast with “unsurvivable storm surge,” the National Hurricane Center says.

Laura was moving over the Gulf of Mexico early Wednesday afternoon with maximum sustained winds of 140 mph, about 200 miles south-southeast of Lake Charles, Louisiana.

It is expected to make landfall over the upper Texas or southwest Louisiana coasts late Wednesday or early Thursday, forecasters say.

The storm’s power and low-lying geography could combine for devastating results: “Unsurvivable” storm surges of 15 feet or higher could overwhelm coasts from south of Texas’ Port Arthur to Louisiana’s Intracoastal City, the hurricane center said.

And surges several feet high could reach nearly to Interstate 10 in Louisiana, endangering cities such as Lake Charles, some 35 miles inland, forecasters say.

“Every little bayou, every little river that normally drains your rain, is going to flow in the opposite direction with storm surge,” he said. “And it (will get) out of those banks and (go) over the land.”

More than 1.5 million people are under some type of evacuation order across parts of Texas and Louisiana ahead of Laura, which killed at least nine people when it raked parts of the Caribbean as a tropical storm earlier this month.

A hurricane warning extends from the Galveston area — as well as parts of Harris County just east of Houston — to Intracoastal City, Louisiana, south of Lafayette.

Houston itself is under a tropical storm warning, meaning strong winds — up to 73 mph — are expected.

Shelters in Texas have been preparing for two threats — stocking personal protective equipment, preparing for social distancing measures and making testing available for coronavirus while the state prepares for Laura, Abbott said.

People have been flocking away from coastal parts of Texas and Louisiana that are in Laura’s path.

Howard Amos, 20, and his mother got out of Galveston on Tuesday, riding a bus to Austin, the Texas capital, CNN affiliate KFDM reported.

“We got up this morning, and then mama, she was like, ‘We got to evacuate,'” said Howard Amos. “So we started packing our clothes, and now we’re here (in Austin).”

Houston is particularly vulnerable to flooding and could see big impacts from Laura. The concrete-filled city has notoriously poor drainage systems and a propensity to flood, such as during the overwhelming rainfall from Hurricane Harvey in 2017.

The Johnson Space Center in Houston said it closed Wednesday to all but essential personnel, and NASA transferred command of the International Space Station from that center to facilities in Alabama and elsewhere in Texas.

In Louisiana, state government said it has transported more than 800 people from evacuation zones to hotels, rather than shelters, because of coronavirus concerns.

Laura’s outer bands already were dropping rain on a large stretch of Louisiana.

“We’re anticipating LA 1 to be underwater for the next 24 hours,” Chaisson said.

Though that area was outside the hurricane warning area, storm surges of 4 to 7 feet are possible there, forecasters said.

Storm surges, damaging winds and tornadoes are among the threats

Laura is expected to make landfall late Wednesday or early Thursday near the Texas-Louisiana state line, possibly as a Category 4, the NHC said.

Destructive winds will be one of the big problems. A Category 4 landfall would mean winds at least 130 mph near the storm’s center — strong enough to destroy homes and knock out power for weeks.

But the storm’s eyewall isn’t the only place to watch. “Hurricane-force winds … are also expected to spread well inland into portions of eastern Texas and western Louisiana,” the NHC said.

Even before landfall, winds of tropical-storm force — 39 mph and greater — should reach the area of the Texas-Louisiana state line, perhaps by 2 p.m. CT, Myers said.

Threats include storm surges of:

• 10 to 15 feet from Texas’ Sea Rim State Park to Louisiana’s Johnson Bayou, and from the Rockefeller Wildlife Refuge to Louisiana’s Intracoastal City

• 4 to 7 feet from Morgan City, Louisiana, to the mouth of the Mississippi River.

From Wednesday through Friday, Laura is expected to produce rainfall of 5 to 10 inches, with isolated maximum amounts of 15 inches, across parts of northwestern Gulf Coast.

Over the lower to middle Mississippi Valley, 2 to 4 inches of rainfall with isolated totals of 6 inches are expected, the NHC said.

A few tornadoes also are expected from far southeast Texas to Louisiana and Mississippi.

Laura’s impending arrival comes as the Gulf Coast avoided a powerful storm in Marco, which significantly weakened before reaching the US.

Deaths in the Caribbean

At least nine people have died in the Caribbean, including several in the Dominican Republic and Haiti, due to Laura.

The victims include a 7-year-old boy who died along with his mother after a wall collapsed in their home in the Dominican Republic. Another person died after a tree fell on a house.

Five people were killed in Haiti, including a 10-year-old girl, the country’s civil protection agency said.