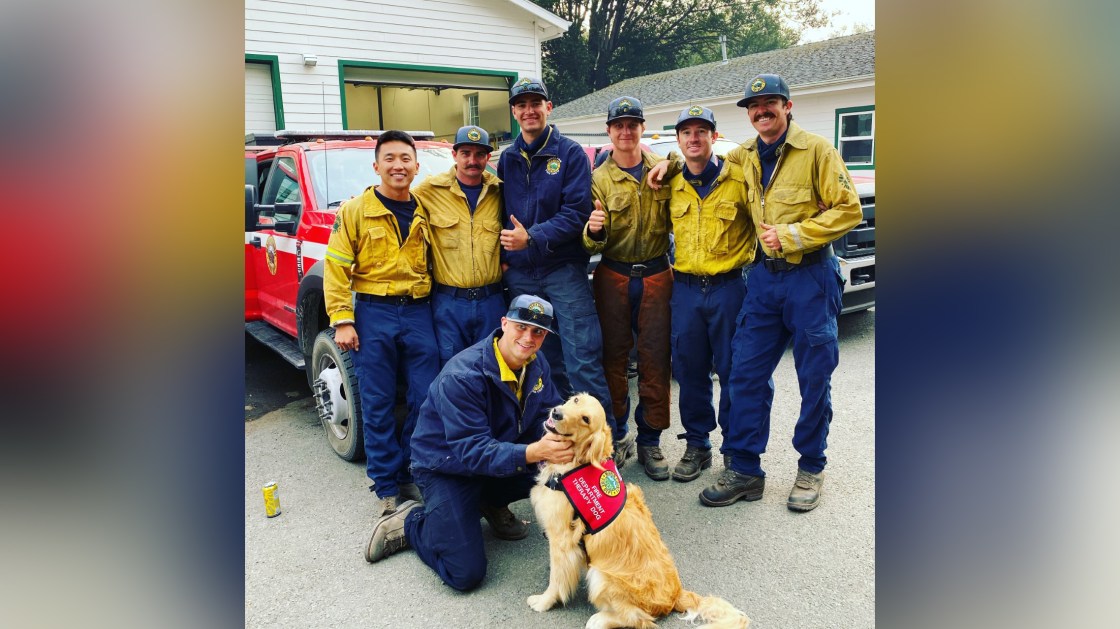 The firefighters at the base camp in northern California have been braving wildfires for the last week, as the Golden State continues to see acres of land burn following a heat wave and lightning strikes.

They wear helmets and goggles that are streaked with ash, and their faces often remain stoic as they work around the clock to help get a handle on the blazes.

But there is always one thing after a long shift that helps make the firefighters smile: the embrace of their canine pal Kerith.

The 2-year-old golden retriever, a certified crisis response therapy dog, takes her job very seriously, spreading love to firefighters as they take on the Woodward fire in California’s Marin County.

On her Instagram page, Kerith describes herself as an “Adventurous Golden,” “Therapy Dog,” “Trail Runner” and “Beach Explorer.”

But to the firefighers on the ground, she’s also a support system.

“During the Woodward wildfire in Marin County, Kerith is boosting morale during the crew’s morning briefing,” Heidi Carmen, Kerith’s human, told CNN. “She brings levity and a sense of playfulness even though they know the task of the day will be challenging.”

Kerith was bred to be a guide dog for the blind in San Rafael, California. But her energetic, super-affectionate nature made her unsuitable for guide work. So, the Carmen family adopted her as their pet.

Later, the pooch earned certification as a comfort dog through the Pet Partners therapy dog organization — and she began making the rounds as a therapy dog in her local hospital emergency ward, Carmen said.

There, she visited patients, medical staff and paramedics. It’s also where she first developed her affinity for firefighters who invited the lively dog to visit their stations.

“Kerith is a very special dog with endless love and affection to share with all who meet her,” Carmen said. “Her favorite people are firefighters.”

When the firefighters know that Kerith is scheduled for a visit, they get excited and look forward to seeing her during their shift, Carmen said.

“She makes people feel loved, special and important. One firefighter told me ‘Kerith has the uncanny ability to make me feel like I am the most important person in the world.'”

In Instagram photos, Kerith is seen alongside smiling firefighters — embracing them or posing with them as they smile.

During the Woodward Wildfire in Marin county, Kerith boosts morale during the crew’s morning briefing.

“There are wildfires to the west, north, south and east of us,” a post on Kerith’s Instagram from last week reads. “Too many fires, not enough resources to battle them so they are growing. We are doing the best we can to lift morale at base camp. Hang in there my friends.”⁣

Carmen said she also hands all of the firefighters a card with Kerith’s picture on it to carry with them.