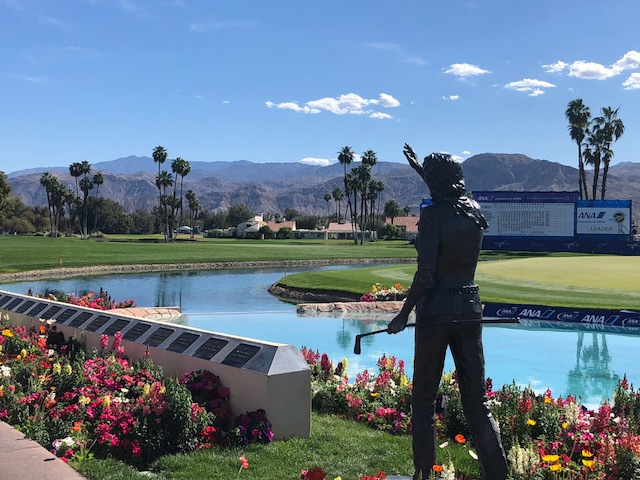 ANA Inspiration Underway in Rancho Mirage Amid Accommodations For Heat

RANCHO MIRAGE (CNS) – The $3.1 million ANA Inspiration began Thursday at Mission Hills Country Club, with the field of 104 for the second women’s major of the season facing what are likelythe highest temperatures for a professional golf tournament in the United States.

Highs of 96, 100, 104 and 106 for Rancho Mirage are forecast through Sunday by the National Weather Service. Because of the heat, there will be 1,500 disposable ice towels available on the tees; increased shade, umbrellas and tents on the course; more water and Gatorade onsite; and coolers and cooler stands for water.

Because of the heat, caddies will be allowed to use carts or push carts.

“That’s unusual, but nothing is typical this year in 2020, but we felt like it was the best decision to keep our caddies healthy,” Heather Daly- Donofrio, the LPGA’s chief communications and tour operations officer, told reporters on a conference call Tuesday.

Caddies will also wear bibs instead of the jumpsuits that are customary for the tournament.

The LPGA has “not ruled out” allowing players to use carts because of the high temperatures and poor air quality from wildfires burning in the region, Daly-Donofrio said.

The tournament is traditionally held in March or April. It was supposed to be held April 2-5, but was postponed in March following a blanket order by Riverside County health officials prohibiting public gatherings exceeding 250 people due to COVID-19.

The tournament will be played without spectators.

The field includes eight of the top 10 players on the Rolex Rankings, but not the No. 1 player and defending champion, Jin Young Ko, who chose to remain home in South Korea due to travel concerns related to the pandemic.

“Choosing to skip this year’s ANA was one of the most difficult decisions of my entire life,” Ko said. “All year I had been looking forward to reliving so many special memories at Rancho Mirage and the opportunity to jump into Poppie’s Pond again.”

Ko has not played on the LPGA Tour in 2020. She has played in three events on the Korean tour in recent weeks, with a best finish of sixth in the Korea Women’s Open.

USC senior Gabriela Ruffels is among six amateurs to receive sponsor invitations to the tournament. She was the 2019 U.S. Women’s Amateur champion and this year’s runner-up. Her parents, retired tennis stars Ray Ruffels and Anna-Maria Fernandez, moved from Australia to Palm Desert after she chose to play at USC.

There have been several changes to the course since last year’s tournament.

About 100 large eucalyptus trees were removed and all the remaining trees trimmed, partly because they had gotten tall and could be uprooted in high winds and partly to open up shots, according to tournament publicist Michele Mair.

Three bunkers were added to the 18th hole and one on the second hole. The bunker on the ninth fairway was renovated and is now three separate bunkers.

There are new collection areas on the fourth, eighth and 16th holes while the collection area on the 17th hole has been expanded. A collection area is a low or hollow place, usually mowed at fairway height just off the putting green. Balls that find this area usually collect toward the bottom.

The Dinah Shore Tournament Course’s warm-weather Bermuda grass is very different from the over-seeded rye that is on the course in March when the tournament is usually played, Mair said.

The winner will receive $465,000 and traditionally makes a leap into Poppie’s Pond after completing her final round.