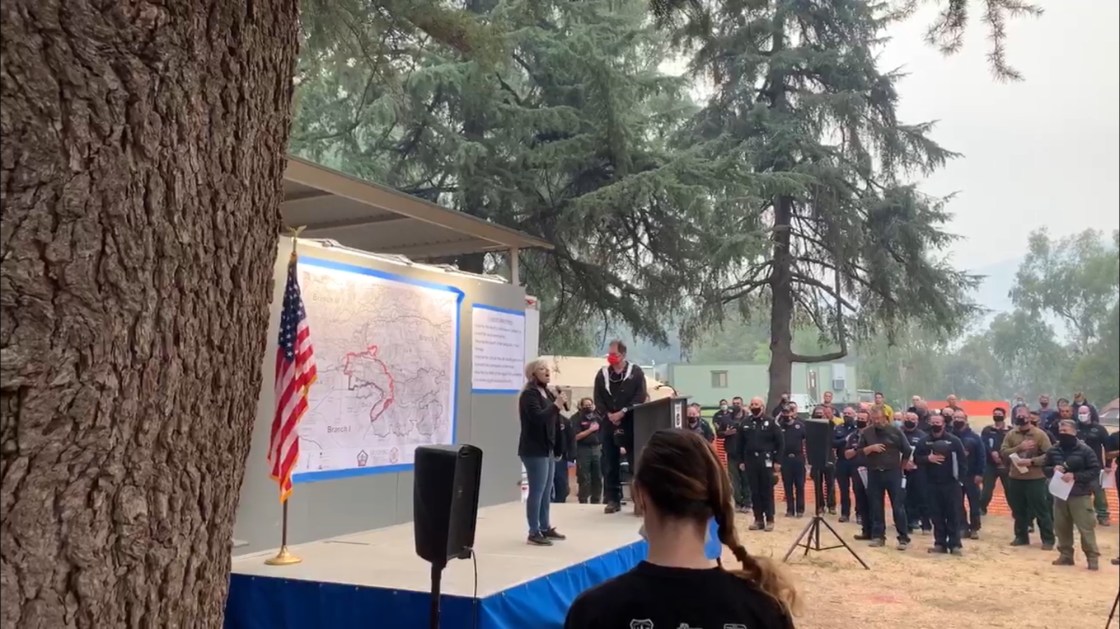 First responders at the base camp of the El Dorado Fire paused to honor their own who were killed on 9-11.

Firefighters who’ve been on the front lines for a week are tired.

“We ended up working on the line for close to 36 hours so for us the long hours and the long shifts are really what’s wearing down on us,” says James Wadlund, a Cal Fire firefighter / paramedic.

But nothing weighs heavier than the loss of 343 of their own.

I asked each firefighter what they think of when they hear the number 343.

“I just think about the commitment that those guys made and the sort of where they set the bar for the fire service being able to look at the problem that they faced that day and still going up the stairs and the towers,” says Captain Justin Karp, with Cal Fire Riverside County Fire Department.

“The New York firefighters that rushed into the twin towers basically knowing that they were probably not going to make it out,” says John Brown, an inspector with the Corona Fire Department.

Seventy one law enforcement officers also made the ultimate sacrifice on 9-11.

This day is also somber for those working to evacuate people threatened by the El Dorado Fire.

“They’re heroes, yeah they’re heroes,” says Sgt. Spencer Badal, with the California Highway Patrol, when asked what he thinks of when he hears the number 71.

“The bravery of all the firefighters and officers on that day,” says Lt. Michael Salinas, with the California Highway Patrol, adding that he was going through the CHP academy when the attack happened.

The terrorist attack happened nineteen years ago, firefighter Wadlund was only four-years-old.

“The phrase never forget is something that really affected me because if people weren’t saying never forget, recording information, telling the stories of 9-11 I wouldn’t be able to experience it and understand it the way I do,” says Wadlund.