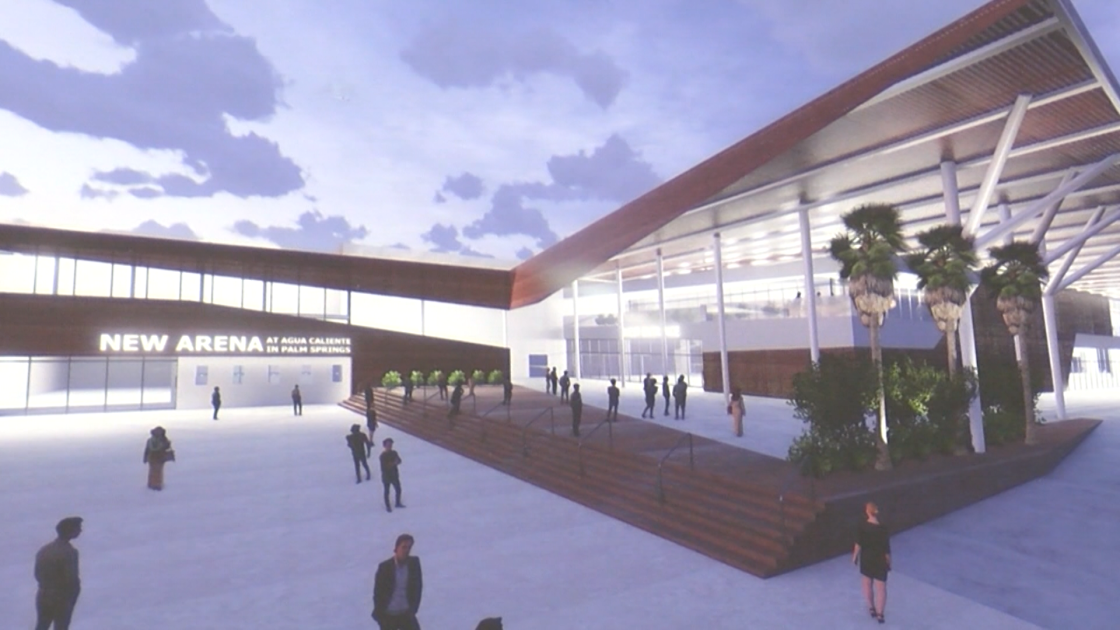 PALM SPRINGS (CNS) – Plans to convert a patch of tribal land in downtown Palm Springs into a sports and entertainment arena have been nixed, although a venue development company still plans to build an arena in the Coachella Valley with a different partner, it was announced Wednesday.

Oak View Group is now planning to the build the 10,000-seat arena in unincorporated Riverside County, north of Palm Desert on land owned by the Palm Desert-based H.N. & Frances C. Berger Foundation, a local nonprofit which will lease the land to the company.

He also cited concerns over parking and traffic in downtown Palm Springs as hindering the original plans.

“After more than a year of good-faith negotiations we were unable to finalize an agreement with the Agua Caliente tribal leaders for OVG to lease, develop and operate the privately funded arena,” Leiweke said in a prepared statement. “We appreciate the ongoing support and encouragement from the community and are very pleased to be partnering with the Berger Foundation who share our vision for creating a world-class venue for the Coachella Valley and what will be one of the most premier music and professional sports arenas in the world.”

Tribal officials did not immediately respond to a request for comment.

The 300,000-square-foot arena, which will house the top minor league affiliate of the Seattle Kraken NHL team, will be constructed on a roughly 43- acre site between Interstate 10 and the Classic Club golf course. Construction is expected to begin sometime next year and be completed toward the end of 2022, the company said.

Construction was originally supposed to wrap up by the end of 2021 in coordination with the hockey team beginning play. It remains unclear how the delay will impact team operations.

With the closure of Desert Ice Castle in Cathedral City in March amid the coronavirus pandemic, the Coachella Valley was left without a skating rink. The new arena is expected to fill the niche left behind in the figure skating, recreational skating and adult and youth hockey sectors.

Officials are also expected to work with Live Nation Entertainment to bring live events including concerts to the venue.

The arena was originally slated to be constructed on a 16-acre plot of land near the tribe’s downtown casino and the site of future tribal developments.

Plans to construct the arena in the heart of downtown Palm Springs had drawn community ire in recent months.

In January, a dozen Palm Springs residents calling themselves “Palm Springs Together” mailed letters to state officials pleading for them to get involved in the proposal, arguing the arena builders should be required to draft customary environmental reports.

A report from Palm Springs’ Department of Planning Services released in December noted “the city has no authority to approve or deny projects undertaken by the tribe on its own land.”

The letter came days after the city released a report that found the arena would be short 1,600 parking spaces, and that parking meters could be necessary. Parking and congestion issues surrounding the proposal remain unsolved.

Business owners had mixed reactions on the decision to move the long-awaited sports arena. some say that they are disappointed because they were looking forward to the business an arena would bring. While others referred to the situation as a double-edged sword, welcoming the foot traffic, but saying parking would be a nightmare. A location was selected, fences went up, and heavy machinery was moved in. But not a single shovel of dirt was ever moved.

And after a year of debate with residents, the city council, and The Agua Caliente Tribe. The Palm Spring downtown arena will no longer be downtown.

“Definitely some disappointing news, we’re looking to open a new store here hopefully soon. part of our opening this store in downtown palm springs was doing research and all these new projects going on down here, and the arena obviously being probably the biggest project which would draw thousands of people to the downtown palm springs area,” said Michell Luther, Owner of Sazzy’s Galleria.

“I was expecting a huge increase in business from the arena. it is a double edge sword because I anticipated all kinds of problems with parking and density just in this area,” said Corey Saldana Owner of The Sandwich Spot.

“That basically would finish Palm Springs the way we know it, the traffic, the parking, the noise, the pollution, the everything. It would completely kill Palm Springs,” said Frank Tysen, ABCD Group Chairman back in January.

The city says they could’ve managed the traffic and the crowds, they’re just happy it’s staying in the valley.

“A partnership potentially between the tribe and the OVG group, and you know for whatever reason that didn’t ultimately end up. The good news is the area still going to be in The Coachella Valley, so I still think Palm Springs will benefit, even if it’s off the I-10 in the Palm Desert Area,” said David Ready, city manager with Palm Springs.

“My shop is very close and we would have really benefited from it, but you know, now the people in palm desert benefit from it and that’s great too,” added Saldana.

“Talking to a couple of different business owners, you could hear the disappointment in their voices that it’s not coming here right now. something I think we definitely needed down here, especially during these hard times, we need a little boost,” said Luther.

As far as a name for the AHL team that will be coming to the valley, those details are still in the works. Completion of the arena is slated for late 2022 or early 2023.