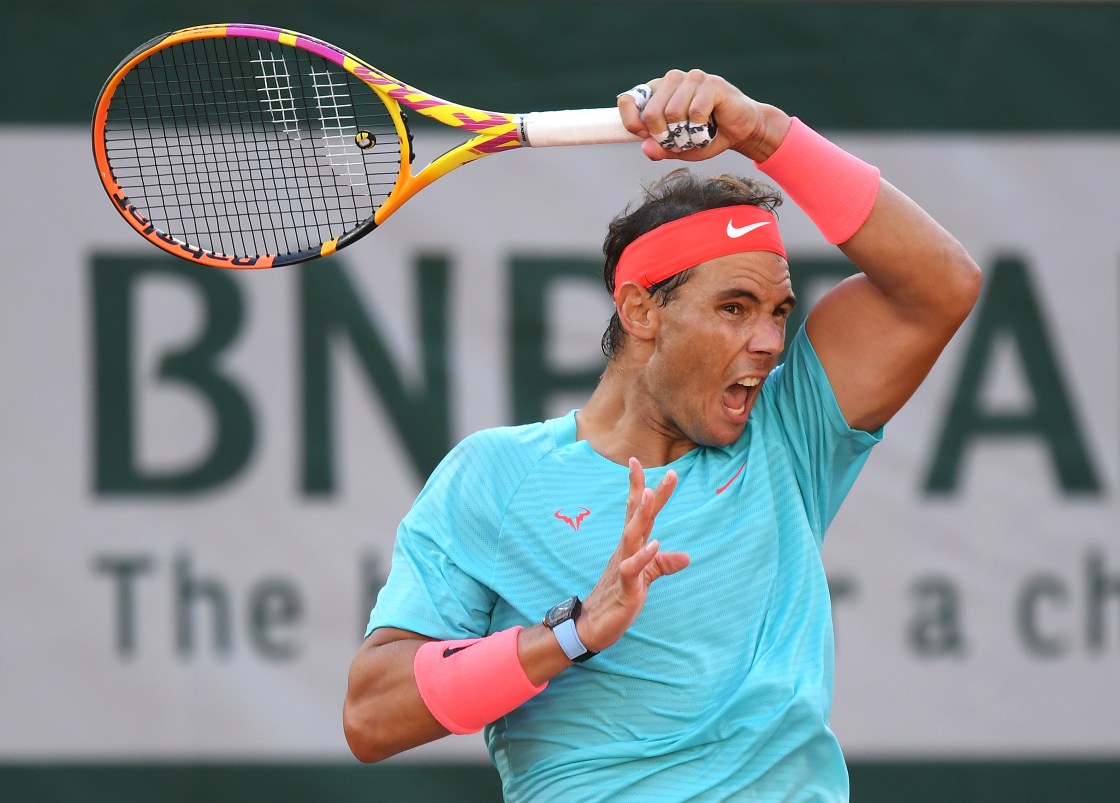 Nadal bids to match Roger Federer’s men’s grand slam record of 20 majors while Djokovic aims for No. 18 to get the closest he has ever been to both of his “Big Three” rivals.

Djokovic then followed as the afternoon gave way to evening and downed Tsitsipas 6-3 6-2 5-7 4-6 6-1 in the second semifinal to earn his spot in a fifth grand slam final on the clay.

The world No. 1 showed no sign of the neck and shoulder injuries he sustained in the quarterfinals in his much anticipated rematch with Pablo Carreno Busta and was on his way to a straight-set win, too, but missed a match point in the third on serve and ended up spending nearly four hours on court.

Will it be a factor Sunday?

Asked on court who the favorite was, Djokovic — who leads Nadal 29-26 in their meetings but trails 6-1 at the French Open — said it was the Spaniard.

“Here, obviously, him because this is his house with all the titles he’s won,” said Djokovic. “It’s the biggest challenge maybe you can have in our sport on all surfaces, to play Nadal here at Roland Garros.”

But even though Nadal usually bosses their French Open meetings, Djokovic won the last one in 2015 and has claimed their last three grand slam duels overall.

“Without playing my best tennis, situation is very difficult,” Nadal told reporters. “I know this is a court that I have been playing well for such a long time, so that helps. But at the same time he has an amazing record here, too, being in the final rounds almost every single time.

“Is one of the toughest opponents possible. But I am here to keep trying my best. I like to play in this scenario. I know I have to make a step forward. I think I did one today. But for Sunday is not enough. I need to make another one.

“That’s what I’m looking for. I going to work hard to try to make that happen.”

Schwartzman and Tsitsipas both missed break points in the first game and were immediately broken to set the tone in the first set.

And they needed to, realistically, win the openers to have a chance of engineering mammoth upsets.

Schwartzman never did get it right on break points, going three for 12. Tsitsipas didn’t convert any of his first 10, prior to Djokovic going through a stretch where he squandered 10 of 11 break points.

Schwartzman was appearing in his first grand slam semifinal and Tsitsipas his second.

Schwartzman inflicted a rare clay defeat on his pal last month at the Italian Open — Nadal’s lone buildup tournament in this reshuffled tennis season due to the coronavirus pandemic — but his older rival once again proved that the best-of-five set format is a different beast.

“I think I am little bit more prepared here, no? Rome has been my first event after six months, and was the first challenge against Diego,” said Nadal.

Besides topping him in the Italian capital, Schwartzman handed Nadal, who has yet to concede a set this tournament, his toughest encounter en route to winning the 2018 crown in Paris. He led Nadal by a set and break two years ago before an unsurprising rally from the now-34-year-old, aided by a rain delay.

But even though he dropped his racket in the first set, hit a backhand that bounced a couple of yards in front of him and shook his head when mishitting another backhand, Nadal found his best tennis of the fortnight on Friday.

He doesn’t like the tournament’s new balls, and the chilly conditions don’t suit his spin heavy game but Nadal hasn’t surrendered a set.

The Argentine — who will move inside the top 10 for the first time after making a maiden grand slam semifinal — said he felt perfectly fine physically after outlasting recent US Open champion Dominic Thiem in five hours on Tuesday.

He couldn’t capitalize on two break points in a 13-minute opening game and conceded serve from 30-0 to trail 2-0.

Schwartzman got back on serve temporarily but was broken straight away for 1-3 and lost the first in an extended 64 minutes. His chances of becoming only the third man to beat Nadal at Roland Garros in the last 15 years plummeted.

Djokovic and Tsitsipas go the distance

Nadal was cruising at 4-2, 30-0 in the third yet suffered a blip to give Schwartzman hope.

The 12-time tournament champion had to save three break points at 5-5 — all with winners — and stormed to the tiebreak, raising his arms in celebration when Schwartzman netted a backhand.

Tsitsipas, the Greek sensation who had beaten Djokovic twice in five meetings, had 0-40 on the Serbian’s serve to start his match and four break points total in the game.

They all passed him by and he was quickly behind 2-0.

Rattled, the world No. 6 showed flashes of his wonderful all-court game but was unable to string together enough consistency to initially trouble the man who has lost only one match all season — his default against Carreno Busta at the US Open.

He finally broke through at 4-5 in the third after Djokovic tried a big backhand down the line and sent it wide on his match point.

The roles were completely reversed and all of a sudden, Djokovic saw one opportunity after another dissipate.

Only 1,000 fans are allowed at the French Open but a small pocket were Tsitsipas supporters who made themselves heard.

After Jurgen Melzer at the 2010 French Open, would Tsitsipas become the second man to beat Djokovic after losing the first two sets at grand slams?

In the fifth, the answer was an emphatic no.

The trainer rubbed Tsitsipas’ leg as the match stretched on and despite winning the fourth, Tsitsipas wilted physically in the fifth.

It wasn’t though, for Nadal and Djokovic.