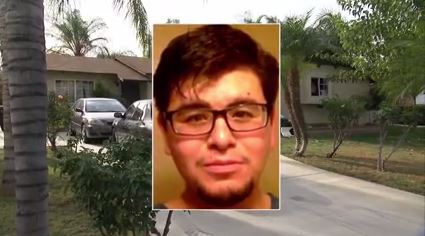 (CNS) – A confidant of an Islamic terrorist who joined his wife to perpetrate mass murder at the Inland Regional Center in San Bernardino nearly five years ago was sentenced Friday in Riverside to 20 years in federal prison for acquiring the weapons used in the attack.

Enrique Marquez Jr., 28, pleaded guilty in February 2017 to one count each of providing material support to terrorists and making false statements in the acquisition of firearms. In exchange for his admissions, the U.S. Attorney’s Office dropped related charges of marriage fraud, immigration visa fraud and lying on a federal document.

U.S. District Judge Jesus Bernal, who imposed a sentence that was five years less than what federal prosecutors had sought, also ordered that the defendant spend 15 years on supervised release once he’s paroled.

“This defendant was an active member of a conspiracy that planned to inflict death and destruction on innocent people,” Assistant U.S. Attorney Tracy Wilkison said. “Today’s sentence is the direct result of actions that enabled a terrorist and laid the foundation for an attack that took 14 innocent lives, wounded 22 others, and shook the entire nation.”

“By his own admissions, this defendant collaborated with and purchased weapons for a man he definitively knew held radical and anti-American beliefs — and who wanted to kill innocent people,” she said.

Marquez repudiated his original guilty plea less than two years after entering it, culminating in a series of hearings involving defense attorney John Aquilina, in which he argued that his client had reflexively made his admissions because of sorrow over the massacre at the IRC.

In January, Aquilina requested that the plea be voided. However, Bernal rejected the motion and ordered the sentencing to move forward.

Aquilina’s sentencing brief was unavailable, but portions of it were included in the government’s narrative, which indicated that the defense believed mitigating factors included Marquez’s lack of actual hands-on involvement in either the planning or execution of the terrorist attack. The defense also characterized Marquez as a weak personality, negatively influenced by his strong-willed terrorist colleague, 28-year-old Sayeed Rizwan Farook.

“Mr. Marquez could have intervened to support law enforcement instead of supporting terrorists,” said Kristi Johnson, assistant director in charge of the FBI’s Los Angeles Field Office. “He might have thwarted the attack, but he chose to stay silent before being captured.

“While the terrorists … paid for their crimes with their lives, the prison sentence imposed on Mr. Marquez may deliver a measure of justice to the victims of the attack for which Mr. Marquez supplied the instruments leading to their deaths and injuries.”

Prosecutors pointed out in filings how Marquez and Farook also made plans to commit mass murder at the library or cafeteria of Riverside City College.

The men additionally schemed to go on a killing spree along the eastbound Riverside (91) Freeway during afternoon rush-hour, identifying a particular section of roadway that had no exits, enabling them to inflict more carnage, according to the FBI.

The defendant backed out of the terrorist plots in November 2012, after the arrests of four Inland Empire men who were gearing up to join the Taliban in Afghanistan. All four were eventually convicted and sentenced to between 10 and 25 years in prison.

Farook teamed with his wife, 27-year-old Tashfeen Malik, to carry out the rampage at the IRC during an employee Christmas party on Dec. 2, 2015. The pair had pledged loyalty to ISIS, and according to federal investigators, Farook, an inspector for the San Bernardino County Department of Environmental Health, had long harbored radical Islamic impulses. The pair went from one office to another, methodically killing his unarmed coworkers.

Both died a few hours later in a gun battle with police on San Bernardino Avenue. Marquez was in Riverside at the time.

He stated on a federal Bureau of Alcohol, Tobacco, Firearms and Explosives form that he was the actual buyer of the two high-capacity semiautomatic rifles with which Farook and Malik armed themselves.

The defendant had moved to Riverside and met Farook, his next-door neighbor, in 2005. Under the future jihadi terrorist’s sway, Marquez converted to Islam, after which he adopted a radical philosophy, and by late 2011, the two were preparing to commit terrorist attacks, according to court papers.

Marquez also engaged in a sham marriage with a Russian immigrant, who is the sister-in-law of 35-year-old Syed Raheel Farook, the terrorist’s elder sibling.

Mariya Chernykh, 30, and Marquez went all-out to make their fake nuptials appear legitimate, taking staged family photos, creating a joint checking account and a back-dated lease that implied they shared a marital residence, enabling her to remain in the country and collect benefits, according to court papers.

Marquez and Chernykh signed immigration documents, under penalty of perjury, falsely stating that they both lived at the same Riverside address, prosecutors said. However, Chernykh eventually moved in with another man in Ontario, while Marquez received money from her as part of the arrangement.

Chernykh later admitted charges of conspiracy, perjury and making false statements to federal officials. She’s free on bond and is slated to be sentenced on March 29, 2021.

In March, the terrorist’s mother, 66-year-old Rafia Sultana Shareef, also known as Rafia Farook, admitted a federal charge of destruction of records central to a criminal investigation. According to the U.S. Attorney’s Office, she was living with her son and Malik, caring for their toddler daughter, in Redlands when the massacre took place.

She took a document, most likely a map, that had been printed by her son and shredded it after hearing of the killings, prosecutors said. Her sentencing is scheduled for Nov. 16.