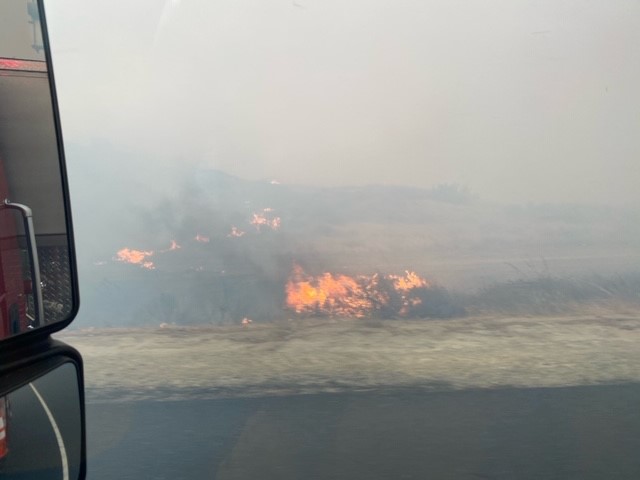 The blaze erupted at 6:47 a.m. in the area of Santiago Canyon and Silverado Canyon roads, and within an hour it had scorched roughly 50 acres. The fire was estimated at about 2,000 acres with no containment by 10:45 a.m.

#SilveradoFire off of Santiago Canyon Road and Silverado Canyon Road, Southwest of Silverado in Orange County is 4000 acres. Lead Agency and For More Information: @OCFA_PIOhttps://t.co/5jUeDg81gJ pic.twitter.com/BuDAoOTVZv

It was difficult to determine the size of the blaze because firefighters had to ground aircraft that were being used to battle it due to high winds that were 20 to 40 mph with gusts up to 60 mph, according to Colleen Windsor, a spokeswoman for the Orange County Fire Authority.

Winds were compromising the aerial firefighting effort, with all aircraft grounded by mid-morning due to gusts that rendered water drops ineffective, while also making flying treacherous for pilots.

Your #OCFirefighters are aggressively attacking the #SilveradoFire from the air and the ground.

According to the city of Irvine, evacuation centers were established at:

By late morning, many of the centers were already filled, and another shelter was being established at Village Church of Irvine, 77 Post.

Although structures were reported to be threatened and there were some reports of buildings already burned, fire authorities had not yet confirmed any structural damage. Aerial footage from the scene showed fire crews dousing flames that appeared to have destroyed a commercial structure near the 241 toll road.

Road closures for #SilveradoFire:
•Portolla from 241 to Jamboree
•241 from the 133 to Santiago
•Santiago Canyon Rd from Cooks to the 241 pic.twitter.com/s7Gg1wjAvO

The southbound Riverside (91) Freeway to the Foothill Transportation Corridor (241) toll road was closed and the northbound 241 was close at Portola.

“It’s bad,” Olivera said of the traffic backing up on the Santa Ana (5) and 91 freeways, as thousands of people tried to flee the area. “The fire’s moving pretty fast so our closures are moving too as it’s jumping (roads).”

Southbound state Route 91 was also closed in the area north of the 241 Freeway.

The fire was sending a major plume of smoke over the entire region, creating unhealthy air across a wide area. The Orange County Health Care Agency urged residents in affected areas to stay indoors, limit outdoor activity, keep windows and doors closed and run air conditions to filter the air.

Southern California Edison had power cut off to 440 customers in Orange County late Monday morning due to the wildfire threat, but another 12,792 customers were under consideration for power shutoffs to prevent fueling the blaze.