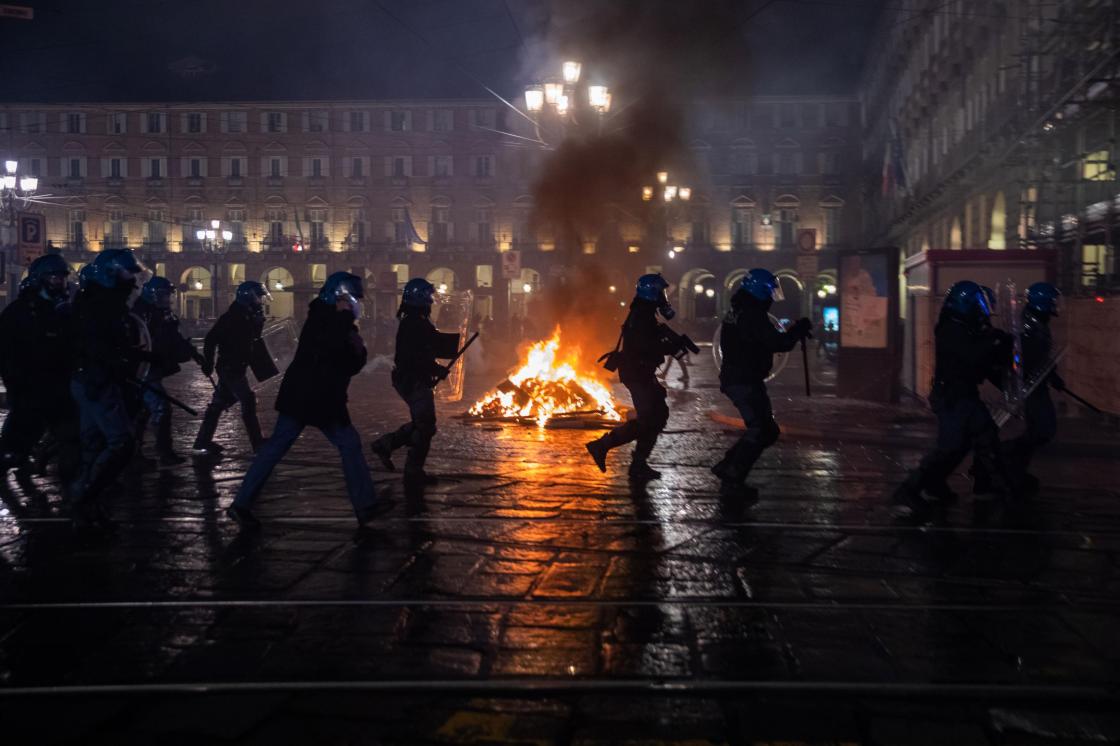 (CNN) — Protesters have clashed with police in northern Italy, as demonstrations erupted across the country Monday night over government restrictions aimed at quelling a second wave of Covid-19.

Police said around 2,500 people turned out in the city of Turin in two separate groups: one including traders, restaurateurs and small business owners who protested peacefully, the other including extreme fans of the soccer clubs Juventus and Torino. Many had criminal records, police said.

Dozens of people, including 10 police officers, were wounded in the clashes as the violent protesters threw stones, firecrackers and bottles at police, and set garbage bins alight. Officers responded with tear gas and arrested 10 people.

Social media footage from Milan shows demonstrators marching the streets with flares and throwing street barricades down subway stairs. Milan police said the protesters were a “heterogeneous” group, including young people, some from the far-right and non-EU citizens. They told CNN that investigations were carried out to confirm if political ideology was involved in the protests.

The Monday clashes followed an Italian government curfew for bars and restaurants, forcing them to close by 6 p.m. Cinemas, gyms and swimming pools were also obliged to shut their doors. Several regions, including Milan’s Lombardy and Turin’s Piedmont have imposed additional local restrictions.

In Milan, 28 people were taken in for questioning following the clashes, which police said were unauthorized. Eighteen were Italians and 10 were foreigners. Thirteen were minors.

The northern regions of Italy were among the first areas in the world to be hit by Covid-19 outbreaks earlier this year, and were placed under strict lockdowns in which people were unable to leave their homes for non-essential movement without permission from authorities.

In the southern city of Naples, demonstrations broke out late last week and continued until Monday. Police, soldiers and some journalists were attacked during some protests, according to Interior Minister Luciana Lamorgese. 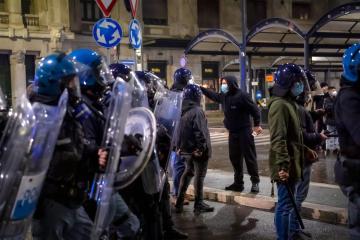 “I express my solidarity and closeness to the members of the police, the local police and soldiers who were attacked in some cases were injured in the streets of the Neapolitan capital during real episodes of urban warfare,” Lamorgese said in a statement Monday.

Police said smaller protests were held in several other towns and cities including Rome, Genoa and Palermo.

The unrest in Italy comes as Europe struggles to slow a powerful second wave of Covid-19. Many countries in the region are tightening restrictions as case numbers rapidly rise.

Italy has experienced a spike in confirmed infections in recent days. The country’s Civil Protection Agency reported more than 17,000 new cases on Monday.

It has confirmed more than 540,000 cases since the country’s outbreak started in February and more than 37,000 deaths.